About the only thing I can see that will add to Chi's review is to further reiterate how meaningful this release is for the anime fan. It's is like an anime movie with RPG elements. All the standard elements are there from the submissive women to the stoic (and often cold) men who always seem to get the babes. The whole dating thing was a bit unsettling at first, but it was so simplistic that I got into it pretty easily and the results were more fun than not. To be quite frank I look forward to giving it another try in another game. Atlus went to the trouble of adding a lot of bonuses with the game that few publishers will offer outside of Japan. I'm referring to the Thousand Arms stickers for memory cards, a cool 3D trading card, as well as an offer to get a free music soundtrack CD ($2 shipping and handling is required) that also contains a PC screensaver, desktop themes, anime wallpaper, and more. If you're any kind of anime fan then this could be reason enough to get an already appealing game. 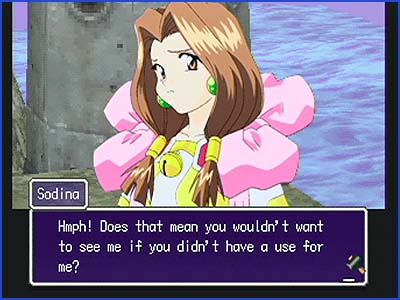 But there are few negatives to Thousand Arms that brings it down. For one thing, while the music is a true high point, the voice acting is a bit forced and can get annoying pretty quickly, but if you're an anime fan, then you're used to dubbing that is not quite perfect. The graphics in Thousand Arms use a mix of 3D and 2D graphics that the regular readers of my reviews will know doesn't always mix well with me. As is, Thousand Arms is borderline. The character sprites are super-deformed (squat) and look rather coarse throughout the game but especially when they are alternated with the excellent cel animation and robust 3D engine. Control in the game has its problems too and it could have been rectified if RED Company had decided to incorporate Dual Shock Analog control. Simply moving in a straight line requires too many adjustments on the D-pad and lining up to talk to people is not at all easy. These points can best be called blemishes because they are noticeable but not big enough to actually ruin the game play at all. And that is definitely what Thousand Arms gets right. Rating: 8.5 out of 10