Scary for the wrong reasons 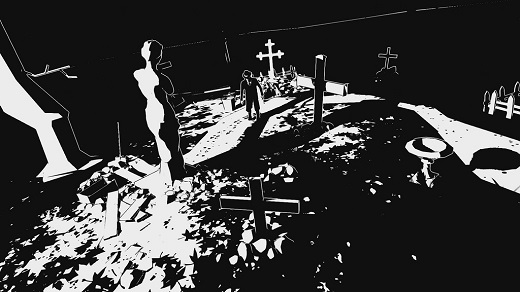 HIGH It attempts to revive the fixed-camera horror genre

LOW Every attack is a one-hit kill

WTF Where are the flashlights?

Imagine Capcom's Resident Evil. Not the recent stuff, but the first one from 1996, with the fixed camera angles and gotta-count-every-bullet difficulty.

Now imagine that same Resident Evil done in black and white celshade style full of dark areas where the player has to light matches in order to see anything.

Finally, imagine that ghosts replace all the zombies—ghosts that kill the player with a single touch, and there are no weapons or defenses against them.

With all that in mind, let me say that what you're imagining isn't just theoretical—it's a game called White Night.

The story starts when a detective crashes his car after a figure passes in front of it at night. Echoes of Silent Hill, perhaps? The detective finds a mansion near the crash site and heads in for help. However, it's full of evil ghosts with only a single friendly spirit among them. Drawn to the non-aggressive ghost, his quest to unravel the mansion's haunted origins begins.

As one might expect, White Night's monochrome style gives heavy emphasis to shadowy areas. The player can't see at all in darkened zones and must rely on matches to light the way because, apparently, flashlights don't exist in this universe. Also, despite the detective wearing a coat and pants (which guarantees at least 6 pockets) he can only carry 12 matches at a time.

If he lights a match, he can no longer use the hand that's holding it, so an electric light must be found and activated to illuminate an area before any bookcase pushing or chest opening can occur. Holding a match and opening a chest at the same time is something they don't teach in detective school?

Matches burn out after about 30 seconds, which sharply cuts into the player's ability to explore the mansion efficiently. Adding insult to injury, about every third match burns out immediately upon lighting for reasons I couldn't pinpoint.

As mentioned in the opening of this review, White Night uses old-school fixed camera angles, which I used to be a fan of. However some of the angles are too obtuse and the game uses analog controls rather than the ‘tank' style of handling that Resident Evil is infamous for. However outdated tank controls might be in 2016, they're reliable. If I hold the control stick one way, the character always moves that direction despite any changes in the viewpoint. With analog controls, the stick must be quickly readjusted after a perspective change or else the detective staggers off in the wrong direction. Combine that with some far-away shots and the black and white environments, and it's frustrating to maneuver.

Now about those ghosts… When they show up the good times really begin!

Ghosts populate the mansion and chase the detective if he gets within a certain radius. They won't come into electrically-lit areas (the light from matches doesn't count) so maneuvering around them or running to a bright zone guarantees escape. However, the controls, art style and camera angles all conspire to make getting around the specters a real pain. And lest we forget, just one touch from a ghost kills the player immediately. Are cheap deaths are abundant in White Night? You bet they are.

A modern save system might alleviate some of the aggravation from the ghosts, but White Night goes old-school here, too. The game uses an outdated manual save system with no checkpoints, so if the player dies (which will happen often) the only option is to load the last manual save and say goodbye to any progress.

White Night is meant to be a slow-burn investigative horror story, but I grew impatient with how incompetent its mechanics are and how they combine to make the experience as irritating as possible. I'm a fan of old-school horror, but one-hit kill enemies, mazelike, hard-to-parse level design, obtuse camera angles and a punishing save system override any nostalgia I might have. I admire that it's trying to pull off a bit of an homage here, but with every good element canceled out by a misstep, I'll stick with the original stuff. Rating: 5 out of 10


Disclosures: This game was obtained via publisher and reviewed on the Playstation 4. Approximately five hours were spent in the game's campaign and the game was not completed. There are no multiplayer modes.

Deaf & Hard of Hearing: Subtitles can be activated for dialogue, but the lack of visual cues when ghosts attack could spell extra difficulty for hard-of-hearing players.