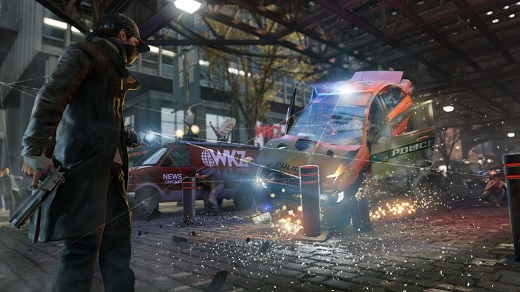 HIGH Infiltrating an enemy hideout, hacking files and escaping without ever entering the hideout itself.

For most of Watch Dogs, I tried to imagine what the game's directors and producers were thinking in the boardroom during development. I kept wondering how many of their early ideas got thrown out in favor of copying other games' successful qualities to maximize profits because that's what Watch Dogs ultimately feels like—a checklist of things I've seen in other places. It's bloated with so much shit to do and no reason to do any of it, but more stuff to do equals more value, which we all know is absolutely true.

Please note, nothing on that entire list of activities has anything to do with the main campaign, and there's no reason to do most of it. Some sidequests (such as locating weapon caches) will award Aiden with a special gun or car, but others are absolutely useless. I tried an AR phone game only to discover it would keep going until I went to a menu and manually quit it. I didn't get experience points, money or special items from it, so I ask the same question I ask of the other content—why is it here at all?

Even the side missions that have obvious rewards (such as car deliveries) are never worth it. I spent ten minutes driving two cars across Chicago on a strict time limit for an end payout of $1,000. Minutes later I hacked someone's bank account in three seconds and was awarded with $10,000. Why should I waste my time driving cars when I can hack? By the second act I had $450,000 in my wallet and owned every gun, outfit and a majority of the vehicles. Money becomes useless in Watch Dogs quickly.

Some side missions offer an immediate level up without having to acquire more XP, but even the skills available for purchase with XP are dumb. I guess blacking out part of the city and disabling car alarms is nice, but things like a faster reload or making shotguns more effective against cars make me shake my head. Why in hell would I waste XP to get anti-car shotguns when I have two grenade launchers in my back pocket?

Pressing A to stick to cover and B to leave cover might not sound strange on paper, but it feels inconsistent in the game. It also has a contextual scheme where Aiden can interact with the environment, but it depends on where the aiming cursor is located. One time I ran at an enemy and hit B for a takedown. Because my cursor was off a bit, Aiden climbed the platform next to the enemy and was shot to death because B is also climb when near a ledge. Holding the Left Trigger to run Assassin's Creed style is fine, but I have to hold B with Left Trigger to let Pearce vault over objects in his path. Why? There was never a point in the game where I wanted to stop and run around objects instead of vaulting over them.

Speaking of freerunning, every on-foot chase in Watch Dogs is boring. It turns out that each criminal in Chicago is an experienced marathoner/parkour practitioner because the bad guys Pearce chases run nearly as fast as he does, which means chases can last until the criminal makes a weird turn or runs into a pedestrian. There's no dash button, nor any long distance tranquilizer gun. Pearce can kill an enemy instead of taking a nightstick to them, but the experience payout wilts for it, and citizens turn on their ESP when Pearce pulls out a piece. I swear, I could be in a parking garage by myself while hidden between two giant trucks, and the second Pearce draws a weapon, someone off-screen would exclaim, "Hey look! That guy has a gun!"

Getting back to the hacking I mentioned earlier, it's ostensibly the meat and potatoes of Watch Dogs, but like most of its mechanics, it's hit-and-miss, too.

The premise of Watch Dogs (I think) is that Chicago was selected to be the first "Smart City," so a metropolis-wide surveillance system was installed to prevent crime and patrol the city via cameras. Of course, the authorities and other hackers use the system to uncover secrets and use it for blackmail. It's sort of like the video game equivalent of Orwell's 1984, but presented without a hint of the eloquence.

Early in the game, Pearce can use his phone to tamper with the entire city. He can use any camera that's in range, mess with traffic lights, blackout parts of the power grid and more. It's a cool idea, but it's not fleshed out enough to be believable or sensible. In order for Pearce to hack anything he has to be within a certain range, and it must be hacked… via wifi?

Essentially, hacking turns into a long-distance ‘Use' button. Having a line of sight is key, and also doesn't make sense. Because hacking is contextual, the aiming cursor needs to be close to something with no obstructions, so it's possible to bounce from camera to camera on the outside of a building as long as Pearce can see the next camera from the last one. It makes for clever puzzles here and there, but let's get real here—if I had master control of a city's surveillance system, I'd never leave my computer desk to put myself in the line of fire.

Even worse than the wifi/line-of-sight conceit is the nonsensical way it's applied to the world. For example, enemies often have front-facing cameras on their bodies so Pearce can hack in and watch where they move. These improbable chest cameras are wifi-enabled and hackable? More absurdly, grenades on enemies are also hackable, and can be rigged to explode from Pearce's phone. Wifi grenades? Sure.

Despite how silly most of it is, some hacking elements in Watch Dogs do shine, but they're rare, or watered down by action-game tropes. If the player follows the correct camera-to-camera trail and makes it to whatever needs to be hacked, he or she can make it in and out without ever setting foot in enemy territory. Those moments are truly special. However, the excitement dies when an enemy sees Aiden. Stealth is often trial and error, with error leading to full-fledged shootouts and waves of enemy backup units. With poorly-placed checkpoints putting me too far back if I failed the sneaky approach, it became easier to run in guns blazing instead of stealth and hacking to finish certain missions.

As such, Watch Dogs not only fails to execute on its big hook, but isn't able to deliver a decent campaign, either. Most of the missions are infiltration followed by hacking, then escaping. This template gets old fast, and felt even more tiresome once I started losing hope that other mission types would pop up. Oh there are others, but it feels like the campaign was designed by one team and the mountain of side activities were developed by another, with no communication between them. I'm not sure that any amount of communication could have salvaged the script, though.

Honestly, the story is just awful. It feels like it was written by a 15-year-old whose only computer knowledge comes from watching sci-fi movies, with no real effort to add sophistication or nuance. Considering that Watch Dogs's premise seems heavily inspired by themes in 1984 and Minority Report, the story bizarrely avoids diving deep on government spying, crime prediction technology or societal uprising. Instead, it's a predictable revenge tale that hinges entirely on rescuing undeveloped characters the player won't care about at all. It's poor writing to give me a single cut-scene early on, then have the whole story revolve around saving someone seen in it. It's just not good enough. And Aiden himself? He's as dull as they come… Just a middle-aged white hacker who uses one tone of voice for the entire game, apparently designed by a homogenous committee that thinks it knows what a cool hero is. They don't.

Watch Dogs tries so damn hard to make coolness ooze from every pixel on the screen, and it just never happens. Instead of feeling original and interesting, it comes off looking like an overdressed department store mannequin. It tries to have something for everyone, but it's just a mess of ideas flailing around to hit the largest possible demographic target. Rating: 6.0 out of 10


Disclosures: This game was obtained via retail purchase and was reviewed on the Xbox One. Approximately 25 hours of gameplay were devoted to the single-player campaign, and it was completed once. Multiplayer in the form of live gameplay intrusions were played sporadically over the campaign.