It takes a lot for a horror game to get under my skin. Sure, I can fall victim to a jump-scare just as easily as the next guy, but it’s rare that one causes me to freeze in place, hesitant to find out what’s making that noise down the hall. Even rarer is the horror game that sends a chill up my back when I simply remember what that noise ended up being, even days after playing it.

Uncanny Valley is a short, sidescrolling horror-mystery that only takes about an hour or two to complete. Due to its slightly open-ended progression, it’s unlikely players will uncover most of its mysteries on the first (or second or third) time through, which prompts additional plays. I wasn’t sure what to make of this structure as I went in, but by the time I finished my first time, my mouth hung open in disbelief and I was eager to dive in again.

Uncanny Valley puts players in control of Tom, a guy who’s moving to a remote area for a security guard job in a recently-closed science facility. He works the night shift, and his partner/trainer Buck takes day shifts. Although Buck tells Tom that nothing happens in the building, that statement gets put to the test over the course of several nights.

Tom has seven real-time minutes to make his security rounds each night. Not long after his shift ends, he’ll fall asleep no matter where he’s standing. Whether it’s from sheer exhaustion or narcolepsy, the game never makes clear. In any event, when Tom dozes off, a nightmare is sure to follow. After each one, he mysteriously wakes up in his room, ready to start a new shift. 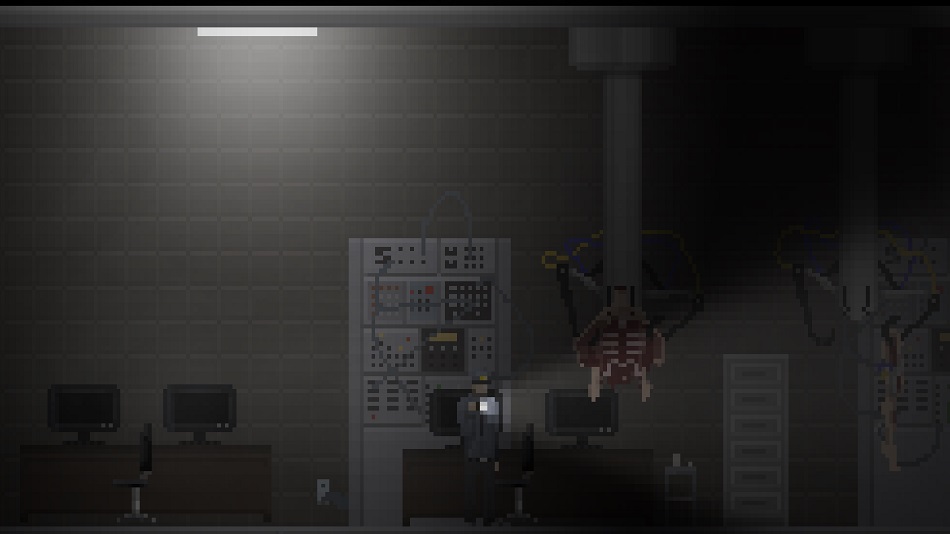 Uncanny Valley hit all the right notes the first couple of times I played through it. Not only that, but it unfolds its vague, slow-burn mystery story so well, I was intrigued to come back for more. However, while this multiple play conceit successfully reeled me in a grand total of four times, that same hook proved to be Uncanny Valley’s undoing. The more I played, the more things I noticed that I just couldn’t get onboard with.

The most obvious problem with these replays is the boredom from re-experiencing the prologue. Uncanny Valley’s opening 15-20 minutes never change, so having players go through it repeatedly was an unfortunate call. No manual save slots exist, so it’s impossible to save the game after the intro and then just pick it up from there on additional plays. I would’ve preferred a more expedited option to push past this static opening on subsequent runs.

Another issue is the sheer obscurity of some puzzles. Parts of Uncanny Valley play out like old point-and-click adventure games where Tom must select an item from his inventory and move it around the screen in attempt to find the right object to use it with. I had to check online guides to find the proper uses for some items, and after knowing the solution, I’m confident that there wasn’t a chance in hell that I would’ve put those answers together on my own.

My final qualm with Uncanny Valley centers around its overall lack of polish. Moving through in-game menus acts as a pause, but some buttons still affect Tom while others don’t. For example, moving the cursor down in menus still makes Tom crouch, but moving left and right don’t make him walk? It’s weird. And occasionally, speech bubbles will spring up under menus or on top of other speech bubbles, which renders them unreadable.

Little issues like these crop up more often than I’d like, and lend an undercooked feeling to this release. The kicker to these problems? Uncanny Valley debuted on PC almost two years ago. While skimming reviews of the PC version, I found people lodging the same complaints about things that I find on console version now. It feels like a missed opportunity to clean stuff up in the time it took them to port this to consoles.

Obscure puzzles and technical hiccups aside, Uncanny Valley is a fascinating and disturbing horror mystery that encourages replay. But, I’d only give it two or three plays, max. Any more, and the lingering unsolved mysteries might become as frustrating as the gameplay bugs. Rating: 6.5 out of 10

Disclosures: This game is developed by Cowardly Creations and published by Digerati. It is currently available on PS4, Xbox One and PC.

This copy of the game was obtained via publisher and reviewed on the PS4.

Approximately 5 hours of play were devoted to the single-player mode, and the game was completed four times. There are no multiplayer modes.

Parents: According to the ESRB, this game is rated Teen and contains blood, violence and language. Uncanny Valley has several jump scares, violence and a lot of disturbing imagery. It’s definitely only best for players prepared for this kind of content.

Deaf & Hard of Hearing Gamers: Sound plays a factor in setting the atmosphere appropriately and some off-screen enemies have sounds cues that alert players when they begin chasing players before they appear onscreen. Uncanny Valley isn’t impossible without sound, but it would be more difficult and lose much of its creepy atmosphere.

Remappable Controls: This game’s controls are not remappable. The control scheme is slightly awkward, too.