This Course Is Heavy 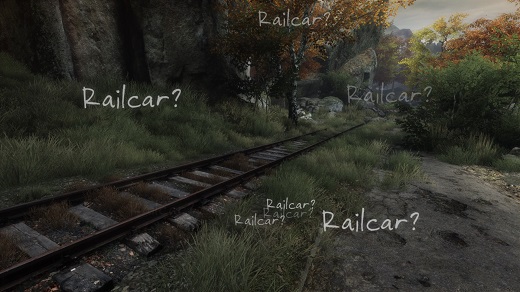 HIGH Drawing blueprints on real paper to solve a puzzle.

LOW The voice acting is disappointing for a narrative-focused game.

WTF Puzzles that hinge on a single object, but no clues given as to where they are.

Ever have that college professor? You know, the one who sets the tone of class on day one by announcing it's going to be extremely hard, and that students expecting an easy A are viciously mistaken? But, this professor is also the one who lightens up as the class goes on and the students learn the ins and outs.

The Vanishing of Ethan Carter is sort of like that professor.

At the beginning, one of the first opening screens reads: "This game is a narrative experience that does not hold your hand."

Well, OK then, The Astronauts. I'd hate for you to assume that I assumed your work was some easy-breezy pushover just because it's one of those "narrative experiences." That initial shock of pretentiousness faded as I began walking through the world, though.

The Vanishing of Ethan Carter is a first-person exploration game where protagonist and detective Paul Prospero explores a small town tucked away between railroad tracks and a dense forest. A young boy named Ethan Carter sent Prospero a letter, having known he'd be abducted soon. Prospero gets to figure out what went down after-the-fact.

Carter sticks to its non-handholding by offering no tutorial, no clear objectives and no waypoints. The player is dropped into this world and simply explores, but the pieces eventually start coming together with some determination.

The meat of the game comes into focus when the player discovers a crime scene. Pieces of evidence from the scene are missing and Prospero must track those objects down, put them back where they belong, and then deduce the chronology of what happened. A slight supernatural element kicks in while Prospero puts things together. Although the player doesn't interact with them, non-playable characters pop up after Prospero solves the crime to play out the scene in a projection-like flashback.

Although I liked the concept of these investigations, my patience waned when I couldn't find crucial crime scene pieces. In one case, a rock which was a possible murder weapon was noticeably missing near a body. Because the game's too hands-off to explain that some puzzles don't need to be completed to progress (or that they can be completed in any order) I wandered the town for half an hour before failing to find the rock I thought I needed.

Investigations aside, the environment is the true star here, and the lush Alan Wake-esque greenery and landscapes don't disappoint. Adding to the atmosphere, most interior areas are so creepy I'd regularly turn around thinking some sort of creature or murderer would be standing behind me at any moment.

The double-edged sword to this world design is the sheer vastness of it. Although I appreciate the beauty and depth the devs have crafted, the explorable area is far too large for how few puzzle areas exist. Only about ten puzzles exist in the world, and half of those aren't necessary to finish the game. Despite how beautiful the environments are, I got bored as I did nothing but walk from one puzzle area to the next, and too many puzzles depend on the player stumbling upon an object to initiate the scenario. The occasional bit of necessary backtracking doesn't do anything to help the pacing.

On the other hand, as the player works through each area and starts to unravel each crime, the story begins coming together. What starts as a possible kidnapping investigation begins weaving themes of family, relationships, depression and emotional isolation into the tale. Without spoilers, I can say that the conclusion is both heavy and satisfying, and made the moments of impatience and frustration I'd experienced along the way worth it.

While The Vanishing of Ethan Carter falls in line with other notable interactive narrative experiences such as Gone Home and Dear Esther, Carter makes the refreshing move to focus entirely on exploration and puzzle solving instead of turning the experience into a quest about gathering audio logs. Despite my frustrations with the pace and the small amount of content to play through, the themes, maturity and imagination on display really stuck with me. Rating: 8 out of 10


Disclosures: This game was obtained via download code provided by the publisher and was played on the Playstation 4. Approximately 5 hours were devoted to the single-player campaign, and it was completed once. The game features no multiplayer.

Thoughtful review, a good read. I bought the game again last week for PS4 having played it on PC and I think it stands up well to a second playthrough – perhaps a little better as any frustrations as to what you’re supposed to be doing are removed. That said, I didn’t have the same issues as the reviewer in regard to missing rocks etc; but I like to poke around and take my time in this type of game. Loved the story, and it is true that “What starts as a possible kidnapping investigation begins weaving themes of family,… Read more »