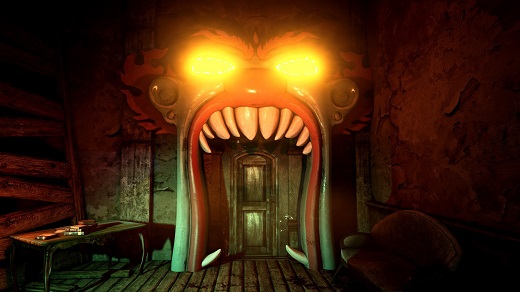 HIGH Deleting it from my hard drive after finishing it

WTF How can a developer with a pedigree make something so stale?

The Park is the kind of game that makes me feel bad, but not bad in the way that the devs ostensibly intend. No, I feel bad because I bet a good group of people put a lot of time, work, sweat and dedication into this game, and the end result is hot garbage. Although it’s perfectly playable—by that I mean it featured no glitches, bugs or errors in my time with it—it’s boring, not scary, clichéd, and over so soon I could barely grasp what was going on, nor feel intrigued enough to care.

Players take first-person control of Lorraine, a high-waisted jeans and leather jacket-wearing woman with a smoky eye, to boot. She’s getting ready to leave a local theme park with her young son Callum. Upon discovering he accidentally left his teddy bear inside, he storms ahead of Lorraine to find it. As it happens, they re-enter at closing time, and as the sun goes down, Lorraine loses her grip on sanity as players explore the park to find her son.

Horror titles likely wouldn’t exist if their characters didn’t make absurd choices, and The Park is no different. Upon entry to the park, I wasn’t sure what to do, so I followed the path ahead of me until I stumbled on a ride—a Loveboat. Although the last thing I’d do while searching for my son in an abandoned park is hop on the nearest attraction, I figured the devs wanted me to, so I got in the swan-shaped craft. Five boring minutes later, I exited after being treated to an on-rails retelling of Hansel & Gretel projected on the ride’s cave-like walls. Despite some weird sounds and the camera’s edges blurring here and there, nothing remotely scary happened.

Boredom is never the emotion I want to feel when playing horror games, but the sad thing is that my experience on the Loveboat basically encapsulates The Park as a whole—players walk Lorraine around and make her ride rides.

Between rides, Lorraine gives monologues about her life that are amateurishly written, full of tropes and melodrama. These bits also seem completely disconnected from what’s going on in the game—in one section she barks about how she hates her son, yet five minutes later she’s mentioning how much she wants to get him back. In another, Lorraine is audibly breathing heavily after being frightened, and then she’s talking excitedly about how she’s always wanted to ride the next rollercoaster but never has.

Maybe these internal monologues were written by two people across the world who never collaborated, and then inserted in the game by a third person? That’s my best guess.

The Park leans hard on bent logic attributed to its protagonist’s psychological problems, but it’s not used creatively. That concept is so tired at this point, I literally roll my eyes unless it’s approached in an inventive way. Some games, such as the Silent Hill titles and the recently released Layers of Fear play well on psychological issues. The Park is inferior to pretty much every horror game I’ve ever played in this regard, and Lorraine is the least likeable protagonist I’ve spent time with in recent memory. If I can’t root for the person I’m controlling, the rest of the game has to fight an uphill battle to create a worthwhile experience, and The Park’s rifle is firing blanks.

Only one area in The Park captured some excitement as I explored—a recreation of Lorraine’s home. However, even this slightly suspenseful setting is ripped out of a superior horror game (P.T.) because it’s a looping hallway with altered aspects each time it’s refreshed. I don’t know what’s more sad, that the concept is copied so brazenly or that it’s the best part of the game.

Although it was originally released for PC in the fall of 2015, The Park feels like a quick tech demo for virtual reality headsets more than a full release, and even if the content were presented in VR, everything about it is so bland that it wouldn’t be effective anyway. By my count, The Park (which I finished in fewer than 90 minutes) contained only one and a half scares. The kicker? It didn’t even have a single good one—it can only boast three half-scares in total.  Rating: 3.5 out of 10

Disclosures:strong This game was obtained via publisher download code and reviewed on the Playstation 4. Approximately 1.5 hours were spent with the campaign, and it was completed once. No multiplayer modes exist.

Parents: The Park is rated M by the ESRB and contains violence, blood and strong language. It should be considered for mature audiences since it offers mature themes and potentially scary, violent imagery.

Deaf & Hard of Hearing: Subtitles are available for all dialogue. Because audio cues exist for scary moments, hard of hearing players might miss out on them.

Remappable Controls: Y axis inversion is available, thumbstick sensitivity can be altered, and no options for button remapping exist. Because The Park is narratively focused, only the thumbsticks and a button for examining items are necessary for most of the experience.

I saw a Lets Play (or more technically a Let’s Walk/Monologue) after The Park came out, and I was astounded by just how dull this game is and how badly it botches its horror aspect. I mean, everyone can tell what the twist is going to be just from the first few minutes, right?