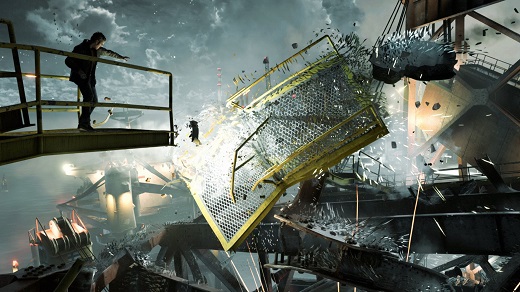 WTF Can we stop saying "countermeasure" every ten seconds, please?

Quantum Break is the kind of game I'd love if I were 13 years old.

From start to finish, the gameplay never evolves beyond shooting a bunch of copy/pasted commandos in different rooms while using time-altering superpowers to aid in the fights. That's something my 13-year-old self would get behind, but it's not enough for me in my late 20s.

What else does the game offer? Developer Remedy would probably answer that with "our mind-bending, dramatic story about time travel."

Late 20s me loves an engrossing time travel tale, but what Remedy lays out here is a sad excuse for a coherent or compelling story. Its time-travel logic isn't explained satisfactorily, and it's bloated with so many boring characters that Remedy made four superfluous live-action TV episodes between the playable sections to cram them all in.

Quantum Break stars Jack Joyce in the leading role. He's asked by old friend Paul Serene to fly across the world to help with a time machine experiment. When Jack arrives and the machine is engaged, it ruptures and forever changes the fabric of time and space.

Any story that uses time travel as its main plot device is a slippery slope, and Quantum Break is a full-on mudslide because things start bad and only get worse.

For example, Paul (Jack's best friend five minutes ago) inexplicably becomes the villain because he went back in time to start a mega-corporation to develop technology to stabilize time fractures.

What are fractures? They're periods when time stops, yet Paul invented magic vests that let people move through them. Coincidentally, Jack's superpowers also give him the ability to move when time stops.

Past Paul (or is it Future Paul?) also built a bunker to save select people in a non-time-stopping capsule so they can live after time stops forever to help figure out a solution to get time working again. Side note: Quantum Break never fully explains what it means when it says time is going to stop forever. Does it affect the whole world? Do people beyond Jack and the magic vest wearers even know when time stops?

In the end, Paul claims to know everything that's going to happen because he's seen the future and he also claims that nothing anyone does will change anything, which kind of sort of renders the entire game… pointless?

Why did a train just randomly ram into the lobby of an office building? Because time travel.

How can Jack free people from time-stopping fractures if they're not wearing a magic time vest? Because time travel.

Why can't Jack shoot enemies who are frozen in time fractures? Because time travel.

Quantum Break is full of nonsense like this, and it leans so heavily on time falling apart to justify nearly everything that happens in the adventure, it seems like they didn't feel it necessary to shore up other parts of the plot. And, any time Quantum Break can't lean on the altered-time crutch, it instead relies on the sort of narrative bad habits that might fly when I was still 13… but I'm not.

One example is how it litters rooms full of text documents that it wants the player to read because the story is so poorly-told via cut-scenes and dialogue. Despite the existence of these text entries, at least one character will keep repeating the current objective every ten seconds in an attempt to rush players into the next room where more commandos are waiting.

After each major chunk of play, Remedy wants gamers to literally put the controller down and watch a live-action TV episode of Quantum Break. These non-interactive portions were heavily hyped before release, but I can't see why they bothered with the idea beyond being able to claim no game has done it before. Just because it's innovative doesn't mean it's worthwhile.

The episodes mostly show inner workings of Paul's company and explore characters and relationships of his employees. Because Jack and other vital characters from the gameplay sections are rarely seen on the show, it's nearly pointless to watch.

When I thought it couldn't get worse, Remedy tried to put a bow on events by attempting a romance subplot with Jack and a side character late in the game story. This romance blossoms after the pair have known each other for less than a day, and it nearly comes out of nowhere.

So Quantum Break's plot is a dumpster fire, but how does it play? The gunfights are fine enough, but the time powers (they're the hook, remember?) aren't necessary often. Unlike other games which set up enemy encounters in ways that encourage players to use and experiment thoughtfully with powers, most of Quantum Break's enemies are easy to defeat with guns alone.

I played through the campaign on Normal difficulty and never spent a single upgrade point on powers because I never needed to. The bullet-stopping shield was useful, but the offensive powers were just novelties, rather than necessary tactics needed to gain the upper hand. There's also only one rarely-seen enemy type that actually required me to use a specific power to defeat him. For superpowers as a central feature, they're ultimately disappointing.

The only saving grace to Quantum Break are well-designed setpieces that offer nice visual flourishes. For example, sometimes enemies will stay suspended in mid-air once they're killed and light blooms off their suits. Other areas (such as a busy office) are frozen in time as Jack explores them. Although visually intriguing, they're not necessarily meaningful to the story or characters.

As Remedy's first game in almost six years, Quantum Break doesn't give me hope that I'm into its games anymore. I liked Max Payne an awful lot, but I was actually 13 when I played it. Remedy might still be making games for teenage me, but I'm a different gamer now. All Quantum Break made me want to do is invent my own time machine to go back and un-play this title, so I could reclaim the nine hours I spent on it. Rating: 5 out of 10

Disclosures: This game was obtained via paid rental and reviewed on the Xbox One. Approximately 9 hours were spent with the campaign, and it was completed once. No multiplayer modes exist.

Deaf & Hard of Hearing: Subtitles are available and visual cues for enemy locations when the player takes damage are available. Both of these make the experience less difficult for hard-of-hearing players.

Remappable Controls: Y and X axes inversion, aim sensitivity, and aim assist are available. Vibration can also be toggled among three strength levels or turned off completely. No button or stick remapping is available.

Having historically been a fan of Remedy, It’s a shame to hear that they didn’t make good on their primary gameplay hook. One thing I’ve felt that they always did well was to centralize their gameplay around the hook, whether it be Max Payne’s Bullet time mechanic, or even the middling Alan Wake’s flashlight. It sounds like they bit off more than they could chew here. Wasn’t the TV show angle originally supposed to be am ACTUALLY TV show tie in at one point, a la Defiance? In any case, I enjoyed your review Corey, and I don’t believe I’ll… Read more »