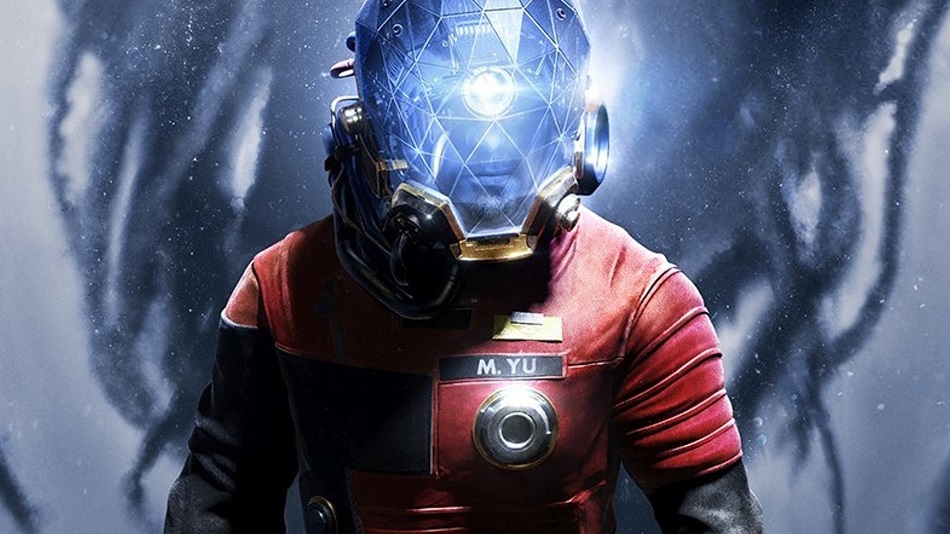 HIGH Thoroughly exploring Talos I for hours at a time.

WTF Harder than it should be, even on Easy Mode.

Arkane Studios must be staffed by magicians. Or perhaps hypnotists.

After Dishonored in 2012 and its sequel in 2016, Arkane has once again covertly put me under its spell with Prey — a first-person tactical sci-fi action game that builds upon layers of gameplay elements Arkane has been crafting to perfection since their first.

Full disclosure: I love Arkane’s games. They make what I can only describe as Corey-Ass Games — First-person actioners with a heavy emphasis on exploration, stealth, multiple approaches to combat situations, clever environmental storytelling and narrative choices. Prey follows in the footsteps of obvious influences such as Bioshock, Deus Ex, System Shock and Half-Life, but its foundation in the visual aesthetics and user interface from Arkane’s previous works are unmistakably present.

Prey serves as a reboot (if the second game in a series can be considered a reboot) to 2006’s identically-named game, but only carries a handful of similarities — those mainly being first-person action, a minority lead character and aliens. It’s probably best to look at it as an all-new standalone experience.

This new Prey takes place entirely on a space station called Talos I that was built during the space race and abandoned until a research company named Transtar took it over decades later. Now in 2032, players control Morgan Yu, who can be male or female. Transtar’s deep, dark secret is that it discovered Typhon, an alien entity, and is running experiments in order to understand it and map it to the human genome. As every sci-fi story in this vein goes, the experiments become unstable, the aliens break loose on the station, and Morgan — now suffering from memory lapses — must both discover the truth behind Transtar’s experiments and decide how to contain (or destroy) the outbreak. 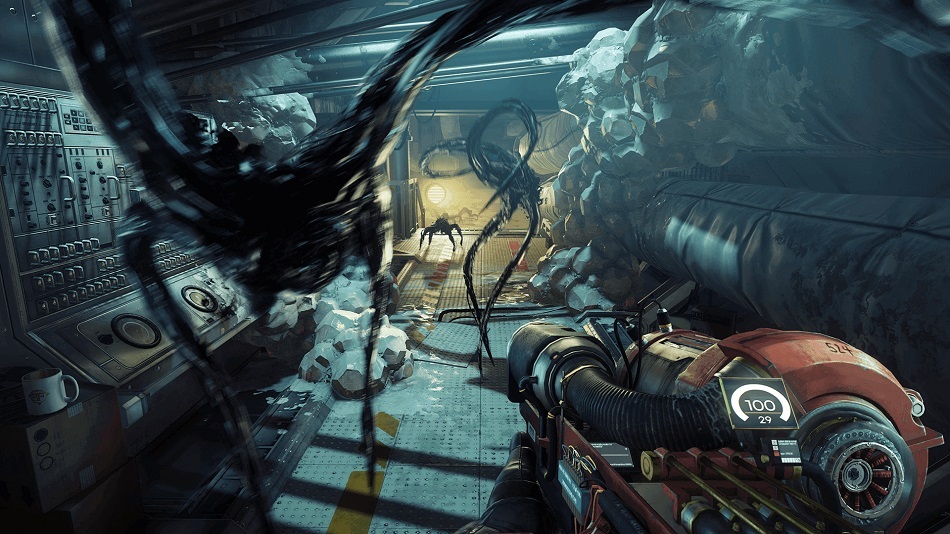 The magic of Prey, much like Dishonored before it, is how easily I got lost in its world. Every time I switched it on, I was in for a lengthy session of tension-filled exploration around Talos I, happily diving in for hours at a time before coming up for air.

At its absolute best, I’d be creeping down retro-futuristic corridors, cautiously scouting and not being funneled down any prescribed path while surveying for enemies, planning clever attacks or sneaking around to escape ambushes. Much like the titles that inspired it, Prey has the tendency to load me up with sidequests and then encourages me to do whatever I want at my own pace — a quality I appreciate while occasionally subverting my expectations on how to get around the station in the first place.

Unlike recent Deus Ex games whose branching environments mostly boil down to ‘find the closest air vent to climb in,’ I found thorough exploration in Prey to be trickier and require more creativity. It turns out grenades that dissolve Typhon into crafting materials are handy for eliminating barriers in front of doors, too. (I wish I’d thought of trying that twenty hours earlier…) Another handy weapon is the foam-shooting cannon that temporarily ensnares enemies. These hardening foam blasts can be repurposed into stairs, ladders or bridges if stuck in the right areas. The foam is also a perfect fire extinguisher! And that seemingly useless toy dart rifle? Don’t write it off before shooting through a window to hit a lock-release button in a sealed room.

Like others in its genre, Arkane slips in several moral choices, and I found myself rethinking my ultimate goal for the station as I met more survivors and learned about them — these missions go a little deeper than simply doing an extra task for a better gun. In fact, I was dead-set on pursuing one main-quest objective for nearly the entire campaign and ended up changing my mind in the eleventh hour. Although Prey initially sets itself up to seem like Morgan is nearly alone on Talos I, several surviving crew members — including some Morgan has previous relationships with — pop up and offer advice on the Typhon outbreak. Depending on how Morgan responds to certain inquiries, characters might be more or less willing to divulge helpful information and alternate strategies.

Although I came out of Prey loving it, it took a while to get tuned into its mechanics. It might look like a first-person shooter on the surface, but the combat is more of the strategic cat-and-mouse variety. It mimics Bioshock in its combat design with a gun in one hand, special power usage in the other, and no fine-tune aiming. Prey‘s special abilities are called Neuromods, which can be used to buy a standard array of abilities such as more inventory space, better melee damage, improved hacking and more stamina for sprinting and wrench-based melee attacks. 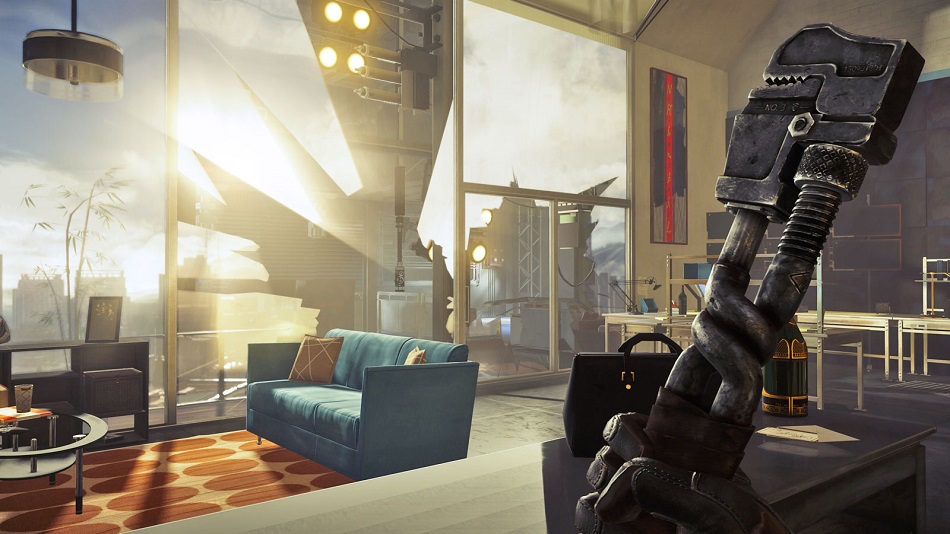 A couple of hours in, the upgrades deepen when alien abilities start unlocking. These varieties offer skills like shielding, telekinesis, kinetic blasts and the ability to transform into nearby objects. These alien mods aren’t groundbreaking, but they’re enough to spice up gameplay and even the playing field should players choose to acquire them. These abilities can also be chained for effectiveness — a levitation power can holds enemies in the air and set them up for either gunfire or a harmful kinetic blast.

It’s important to note that if Morgan chooses to pursue alien abilities, enemies must be scanned and researched to unlock them, so upgrading these takes considerably more time than the human ones. Another caveat is that companions on the station are quick to point out that if players upgrade too many Typhon powers, they’ll be seen as less than human and could be treated differently by survivors or Talos I’s station security.

Whether Morgan skews alien or stays human, my biggest issue with Prey is a slight over-reliance on enemy presence compounded with the relatively loose-feeling combat controls. The base enemy type, a Mimic, can transform into any mundane object to hide and deliver a surprise attack. These infuse a good slow-paced tension and caused me to cautiously scan rooms rather than run full-speed everywhere. However, the tension wanes when I end up spinning around like an idiot wildly swinging my wrench (and draining my stamina) trying to hit an antagonistic coffee mug. Another enemy type can teleport, so back-of-the-head cheapshots aren’t uncommon.

Although these combat examples might sound like deal-breakers, Prey is smart enough to rarely force combat on players. As long as I remained careful and approached each area with caution, I could deliver surprise attacks or avoid enemies altogether. It’s tuned just well enough to where I only died a handful of times over the 40 hours I spent with Prey. And because Prey doesn’t feature a kill-based leveling system, the only loss suffered from avoiding fights is missing items enemies might drop. Unfortunately Prey clings to the tired Triple-A idea that a game’s conclusion should require a combat crescendo, so the confrontations in Prey‘s last leg made for frustrating, overwhelming encounters. What a shame, Arkane. I’m not mad, just disappointed.

Occasionally the combat and exploration are hampered by an awkward control scheme, and some issues here are Game Design 101 problems. On PS4, only one control scheme exists with no remapping options, and it has some incredibly silly button assignments — Both L1 and R1 are used for leaning, which is a colossal waste since it’s rarely needed. Holding Triangle pauses the game for the easy-access weapons/power radial wheel. This seems fine, but Prey features a health bar and a suit integrity bar and there’s no option for Suit Repair Kits in the radial menu. I used these Kits all the time and had to pause and go into the inventory menu to use them. Both of these mapping choices seem like obvious whiffs.

After my love affair with nearly every game that inspired Prey, it seems tailor-made to satisfy me. It is indeed a Corey-Ass Game. Although it does have a few rough spots, Prey is phenomenal, and I immediately dived back in to play more as soon as the credits rolled — a rarity for me. Arkane Studios has been on a hot streak with its past three titles, and I’m looking forward to whatever they try to hypnotize me with next. Or maybe the hypnosis is so ingrained at this point they’ve simply conditioned me to enjoy everything they produce? Hypnotists, indeed. Rating: 9 out of 10

Disclosures: This game is developed by Arkane Studios and published by Besthesda Softworks. It is currently available on Playstation 4, Xbox One and PC. This copy of the game was obtained via publisher and reviewed on the PS4. Approximately 40 hours of play were devoted to the single-player mode, the game was completed once, and was played extra after finishing. There are no multiplayer modes.

Parents: According to the ESRB, this game is rated Mature and contains blood, use of alcohol, language and violence. Prey does contain all these, but they’re all pretty mild. Considering the player fights alien lifeforms for most of the game, there’s not much human-on-human violence, nor much blood. But it’s still best for mature audiences.

Deaf & Hard of Hearing Gamers: Prey contains subtitles for all dialogue, and on-screen prompts that show when enemies are suspicious and fully alert to players. These are helpful, but overall the game will be slightly tougher without sound.

Remappable Controls: This game’s controls are not remappable, and the control scheme is a little weird. I talk in-depth about it in the review text. The Y-axis can be inverted or standard. Sensitivity, Head Bob and Camera Roll can all be adjusted on separate sliders.

Colorblind Modes: There are no colorblind modes available in the options. Some areas in Prey are dark, and most enemies are black, shadowy creatures. Also, the onscreen alert prompt that pops up over enemy heads is light blue and red half-circle, and becomes fully red when enemies are alert.

Thanks for mentioning the Y-axis camera inversion option. And just to be clear, the X-axis is set and stuck to Standard with no option to Invert (this is my observation from the PS4 version).