If Hotline Miami and Olli Olli had a baby… 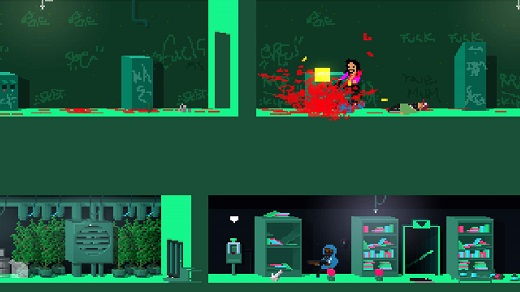 HIGH The silly dialogue made me laugh out loud

LOW It's constantly on the border between challenging and unfair

If Hotline Miami and its sequel didn't provide enough arcade-style, fast-shooting, chiptune-blaring ultraviolence, Devolver Digital has published something new for the same crowd.

Described as a 2-1/4D (whatever that means) sidescrolling shooter, players must help BunnyLord win his local election. This odd character's campaign platform is built on reducing crime in city gangs, which translates into the murderfest Not A Hero is.

Each stage provides a multi-level area filled with enemies. The meat of play is running and gunning, but there are twists. A slide button lets the character safely move into cover or trip an enemy if they're close enough. Downed enemies can be one-shotted with an execution. Power-ups can be found, such as flaming or laser rounds that last for only one clip. There are also secondary weapons, like grenades or pipe bombs.

Three optional objectives exist in each of the 21 missions. Some involve time restraints, some require killing everyone, some require using every weapon in a level, and so on. More secondary objectives cleared mean a higher approval rating for BunnyLord. The higher the approval, the more characters unlock.

Only one playable character is available from the start, but each unlocked assassin has distinct advantages and disadvantages. For example, one moves and reloads slowly, but holds a powerful machine gun. Another might be capable of silent executions, but has a small clip size, and so on.

Despite being all about killing quickly and efficiently, Not a Hero is often silly, funny and has plenty of charm. Most of BunnyLord's dialogue reads like a Mad Libs sheet because certain adjectives or nouns don't make sense when he speaks, but it's all tongue-in-cheek. The game isn't meant to be taken seriously in any way.

Despite the silly tone, Not a Hero's campaign is no cakewalk.

Much like Hotline Miami, my patience was constantly tested. Within the span of any given 30 seconds I could swing between relieved, joyful, irritated, surprised and so frustrated I wanted to throw my controller through the television.

Not a Hero's missions get progressively more difficult, and it too often toes the line between challenging and unfair. Cheap deaths (especially from one-hit-kill enemies in later levels) are abundant, and completing levels often feels more like good luck rather than skill. I imagine that each stage can probably be beaten in about a minute for those who've absolutely mastered the play, but I spent nearly an hour on certain missions due to repeat deaths and no mid-mission checkpoints.

With difficult games coming into vogue over the past few years, Not a Hero isn't fresh or deep enough to make it stand out despite the humorous notes. A title like this will have an audience for sure, but the silly charm didn't outweigh the irritating difficulty for me. Ratings: 6 out of 10


Disclosures: Not a Hero was obtained via a download code from the publisher, and it was played on the Playstation 4. Approximately 5 hours of time were spent in the single-player mode, and only 19 of 21 stages were completed. There are no multiplayer modes.

Parents: Not a Hero was unrated by the ESRB at the time of review, but it should be considered appropriate for mature audiences. Although it's a cute NES-style retro sidescroller, the main gameplay mechanic is shooting and stabbing people. The game contains lots of blood, body part dismemberment and mild language.

Deaf & Hard of Hearing: There is no spoken dialogue in the game, so subtitles are constantly on for written character dialogue. Despite the music being quite good, audio provides no additional gameplay advantages.

I’m a fan of this sort of arcade throwback but I agree about the controls here, that and difficulty spikes are what give an otherwise good game bad scores. I had the same issue playing the iOS version of Kung Fury, similar game and it was really cool except the difficulty during the waves was way too sporadic