Ghosts In The Shellfish 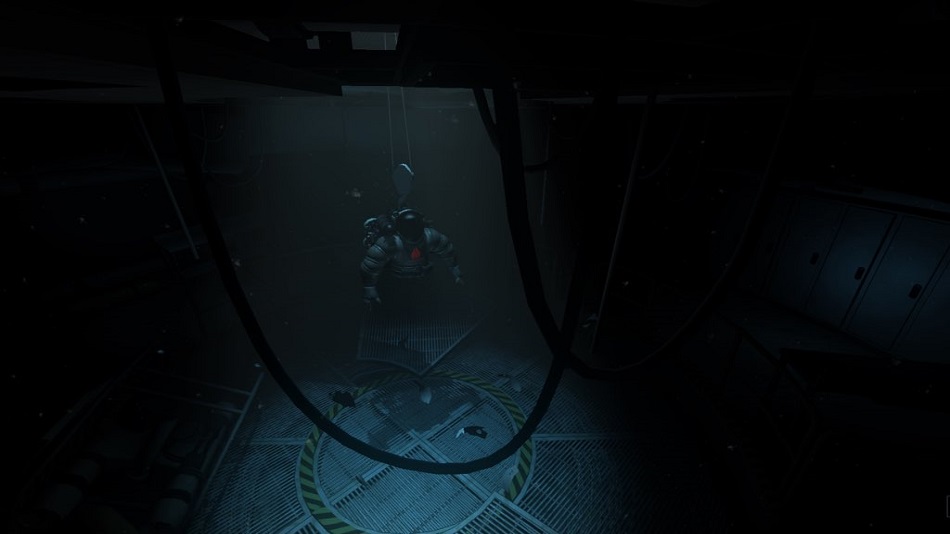 LOW Dying ten times while trying to navigate one section.

WTF Should it really take this many stabs to kill a squid!?

At a certain point in my gaming career, I thought I’d seen everything that could scare me in horror games. From Resident Evil’s vicious crimson-head zombies and Silent Hill’s twitching fleshy monsters, to Alien: Isolation’s deadpan androids and Condemned’s unpredictable vagrants, I thought I’d seen it all. However, every once in a while something will come out of the shadows and genuinely surprise me. After playing hundreds of hours of scary games over multiple console generations, Narcosis finally unveils the creature that scares me the most.

Take one of the things I fear most — spiders — and mix them with something I find absolutely repulsive — crabs. Throw in a bonus squeaky chittering sound when they’re close by, and it’s instant tension. For me, anyway.

Honor Code’s debut puts players in the claustrophobic diving suit of an engineer working in a methane-mining facility on the ocean floor. When an earthquake erupts miles away, its aftershocks rupture the station’s walls. In that instant, regrouping with the research crew and surviving to an escape pod become top priority. However, creatures lurking on the ocean floor have other plans. Cuttlefish, squids, bioluminescent anglerfish and — ugh! — the dreaded spider crabs all make the struggle for survival a little more interesting.

With first-person horror becoming oversaturated in the past few years, I was ready to write Narcosis off as a Soma clone, largely because both are thrillers taking place in research facilities on the ocean floor. I wasn’t expecting much, but boy was I wrong.

About fifteen minutes in, I was standing alone on the bottom of the ocean with only a measly headlamp to light my way and a little pocket knife to defend myself. I rounded a corner, and in a dark ravine ahead I saw what looked like a set of giant spider legs poking out from the shadows. As I crept closer, I realized it was a spider crab standing about three feet tall. At that point I was already sweating and mouthing some choice words, so imagine how I felt when the disgusting crustacean started marching out of its cave toward me.

Yeesh, I get chills just thinking about it now.

In that moment, I took back my thoughts of Narcosis being a poor man’s Soma. It proved itself more than worthy with a spider-crab encounter so squirm-inducing it now sits next to Limbo‘s shadow spider in my personal ‘creepy monster reveal’ hall of fame. Later, I entered a room with two spider crabs guarding exits and was so scared to move, I let all my diving suit oxygen run out while standing there. I’m not kidding around when I say this game made me realize one of my worst fears is spider crabs. Apparently I’d rather die than get close to them. 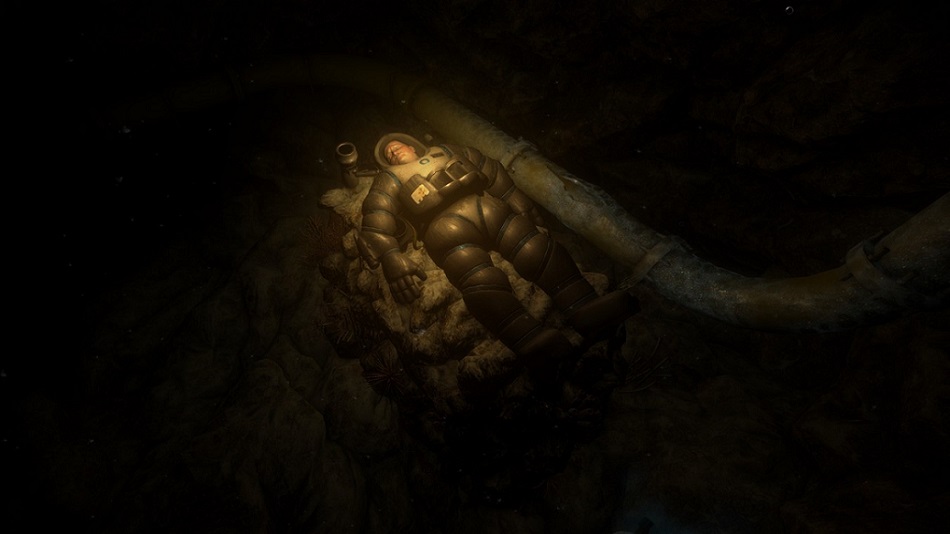 Along with these tight, intense opening segments, Narcosis impressed me with how well it set its rules and mechanics, and then follows them. For example, in the tutorial, I discovered the left thumbstick both moved me forward and turned me, while the right stick moved my head around in the helmet without turning. Initially this seemed like an odd switch from most first-person games, but the limited and awkward movement perfectly captures the feel of slowly trudging along in a cumbersome diving suit. This isn’t a swift action game, after all.

The diving suit also has an oxygen tank that depletes over time. This keeps tension up, as it encouraged me to keep moving. After all, if I stood around too long while paralyzed by spider crab fear, I’d suffocate. For the most part, the tank lasts long enough to never be irritating, and refill stations are paced out well. Encounters with dangerous wildlife or other stressful situations cause heavy breathing and drain the tank faster, which is a dreadfully nice touch. This tension is perfectly executed in situations where I’d enter a room full of dead (or are they?) squids and had to carefully navigate around them while also worrying that the stress would cause me to suffocate faster. Genius.

Narcosis‘ first half sets things up to be linear. In most instances, there’s only one way to go or a few rooms to explore. I didn’t mind this, because it let Honor Code set the stage for jump scares. There are plenty of cheap (yet excellent) frights, but they’re balanced with more abstract hallucinatory moments. In one instance the facility starts to fold over on itself and causes the walls to become floors and vice versa. I had to use the suit’s built-in thrusters to platform and get around. Although hallucinations aren’t exactly groundbreaking, they offered creative spice to Narcosis’ usual linearity while keeping me on my toes.

Unfortunately Narcosis suffers when it starts to stray from the path it initially set for itself.

About halfway through, I was stranded in an open area away from the research facility. Narcosis had been almost completely linear up to this point, but then decided to take a sharp left into exploration. With no identifying objective marker or trail to go by, I suffocated about ten times in this area while trying to figure out where the hell to go. When I finally found the path, it was blocked by a spider crab that was supposed to move away and get me to follow, but it didn’t actually move until after my fourth retry, each one ending in death. These deaths, of course, led me believe I was going the wrong way, so I died a few more times exploring other paths before coming back to the stubborn crab. Perhaps this was a bug, or I just wasn’t approaching the crab the right way to coax it into moving, but it was an incredibly irritating scenario.

From that point on, I became frustrated with Narcosis and pressed on to the end with annoyed determination instead of shaky dread. Nothing kills fear faster than frustration, and Narcosis‘ odd move to an open-ended area after a string of linear environments killed the pacing for me.

I also encountered a couple of deaths in areas with checkpoints that set me back about ten minutes each — it was more frustration that I didn’t need, especially when one of those deaths happened because I jetpacked myself into an area I couldn’t get out of and had to stand there and wait for my oxygen to run out. A ‘Restart Last Checkpoint’ option in the pause menu would’ve been greatly appreciated here.

Despite the second half not equaling the taut opening, Narcosis is still a great horror title. Now that first-person horror is a dime a dozen, it’s easy to be skeptical about these games, but Honor Code left a solid impression by mixing effective jump scares with abstract horror. They also know when to let off the throttle to build suspense instead of ramming enemies down players’ throats every ten seconds — and hey, if players (like me!) are incredibly creeped out by spider crabs and other gross ocean wildlife, they should get ready for a stressful ride in almost all the right ways. Rating: 8 out of 10

Disclosures: This game is developed and published by Honor Code, inc. It is currently available on Xbox One, PC and on Oculus Rift for VR. This copy of the game was obtained via publisher and reviewed on the Xbox One. Approximately 5 hours of play were devoted to the single-player mode, and the game was completed once. There are no multiplayer modes.

Parents: According to the ESRB, this game is rated Mature and contains intense violence, blood and language. Considering Narcosis is a scary survival horror game, I wouldn’t recommend it for anyone who isn’t interested in this genre. The whole game takes place underwater in first-person in a diving suit, so players bothered by claustrophobia should take note of the conditions. It does feature all of the descriptors listed above, but harsh language is used sparingly.

Deaf & Hard of Hearing Gamers: Narcosis contains optional subtitles for all dialogue. Due to the game being first-person survival horror, sound design plays into the atmosphere a lot. The only enemy that makes a distinct noise is spider crabs, and those are only lethal if the player is directly next to them. Much of the suspense and atmosphere dissolves without sound, but the game wouldn’t be much more difficult without it.

Remappable Controls: This game’s controls are remappable. The face buttons, bumpers and triggers can be customized. Y-axis inversion, look sensitivity, vibration, camera shake and head bob can all be adjusted as well.

Colorblind Modes: There are no colorblind modes available in the options. Because Narcosis takes place underwater with only a diving suit headlamp to light most areas, it is dark most of the time. Some doors that can be opened glow blue on their perimeters and locked doors glow red.

You are so like me – although I would have liked the open-ended “what do I do now?” stuff.