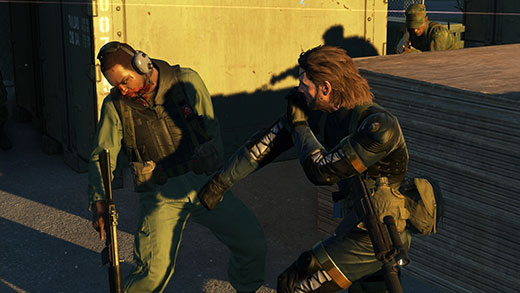 HIGH The slow-mo reflex mechanic that kicked in to save my ass countless times.

LOW Hitting "Restart Checkpoint" because a guard saw me across the map.

WTF That time a guard shot me from one foot away … with a rocket launcher.

Contrary to what some games say, war does change, and Metal Gear has changed along with it. Every entry in the series has evolved in some way, and Konami's newest tech demo, Metal Gear Solid V: Ground Zeroes

Gone are the corner menus for weapons and gadgets. Now they're replaced by contemporary D-Pad weapon switching. This also means only a few weapons can be carried simultaneously.

The Soliton radar is gone, too. Now Ground Zeroes embraces a Far Cry/Crysis-esque tagging system where the player highlights enemies through binoculars. After that, enemy outlines appear when behind walls and objects to help players keep tabs on them.

The long, gameplay-halting codec sequences are also scrapped. Now a shoulder button calls informants in real-time for mission updates as the action unfolds.

Cuts to ‘signature' gameplay haven't been this severe since Mass Effect 2, but they're all welcome for Ground Zeroes. The only time a player will have to stop the action is when the pause menu is accessed for maps or objectives.

Those small evolutions aside, perhaps the most notable new gameplay addition is Ground Zeroes's true open-world map. The entire campaign takes place in a sandbox without environment segmentation. As such, gameplay is significantly more strategic because a player can't hide behind loading area triggers or objective-clearing cut-scenes to get out of hairy situations.

Although Metal Gear always gives players the option of knocking out or killing opponents, Ground Zeroes gives that decision weight for the first time. If a player knocks someone out, that sentry might wake up 20 minutes later to cause alerts across the base.

Enemy sentries are also unpredictable in other ways, giving Ground Zeroes a believable, if not occasionally frustrating experience. If an enemy spots the player, several things might happen. The sentry could shrug it off, he could open his flashlight and inspect from a distance, he could waltz over slowly to check it out, he might run over, or even call for a search party. This randomness kicks the intensity up.

Naturally, the more carefully a player plans, the more successful the execution of a mission is likely to be. Ground Zeroes conjures up a Hitman-like feeling of progression where the player is bound to fail several times at first, but will eventually run through the campaign like a pro after a few attempts.

On the subject of replayability, Ground Zeroes is what a player makes it.

The first mission took me between 2 and 3 hours to finish the first time. More missions unlock after that, but they're on the same base with different objectives. However, despite minor differences, most of the secondary missions feel similar to the first, consisting of finding and assassinating someone, or gathering some sort of intel before exfiltrating. One on-rails, action-heavy helicopter mission is a striking and delightful exception, though.

is short and sweet, but if a player is truly invested, he or she can relish dozens of hours in replay value. On the other hand, $30 is excessive for what it contains, and it feels too much like a publicity stunt for the full-sized follow up, The Phantom Pain. That said, it's a successful one—despite some reservations, I'm intrigued by this evolution and will definitely pick up Phantom Pain on release day. Rating: 7 out of 10