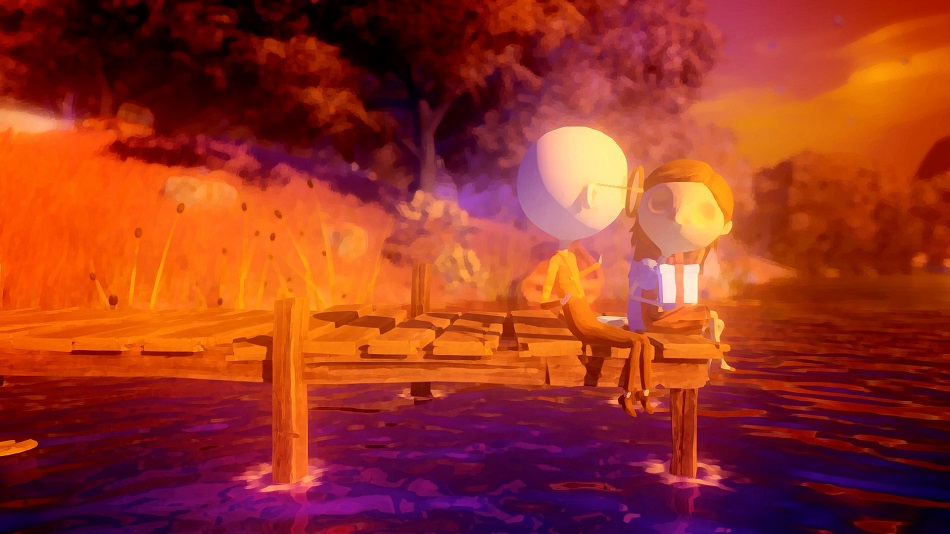 WTF The endearing character models look creepy after a while.

Last Day of June is one of those stories that begins with so much saccharine-sweet happiness that I just knew it wouldn’t be long before things took a grim turn.

Players control Carl, a man sitting on a lakeside dock with his artist partner. He delivers a romantic kiss while she takes a break from sketching a caricature of him in front of a gorgeous waterfront sunset, and when the sun goes down, she shivers from the cold and Carl heroically runs to the car to fetch a blanket. While he’s gone, she prepares a gift — a present she’s been hiding — complete with a beautiful bow on top.

Being the cold-hearted robot I am, I nearly rolled my eyes at how romantic the scene was. I knew the end was coming, and I was right. Before long, tragedy strikes and gives impetus to the game’s central mechanic.

Last Day of June is part third-person puzzler and part narrative exploration (aka walking simulator) where players must relive this lakefront vacation day repeatedly in an attempt to rearrange the events that led up to the accident for a less tragic outcome.

As the day resets, time reverses to the morning just before Carl and his partner leave their whimsical village cottage to visit the lake. A cast of secondary characters such as a young boy looking for someone to play soccer with and a bashful neighbor, among others, live nearby. Players can control each character in the village and alter their actions during the day to prevent catastrophe later.

For example, instead of Timeline A where the young boy chases a soccer ball which contributes to the accident, players can have him explore the village and find something else to do that won’t involve the ball. Also, certain characters have special abilities that open up new areas. The same boy can throw his ball at plant vases and knock them over to reveal new areas, but because he’s small, he’s unable to open heavy metal gates. An adult character such as Carl’s neighbor can open metal gates, and so on. 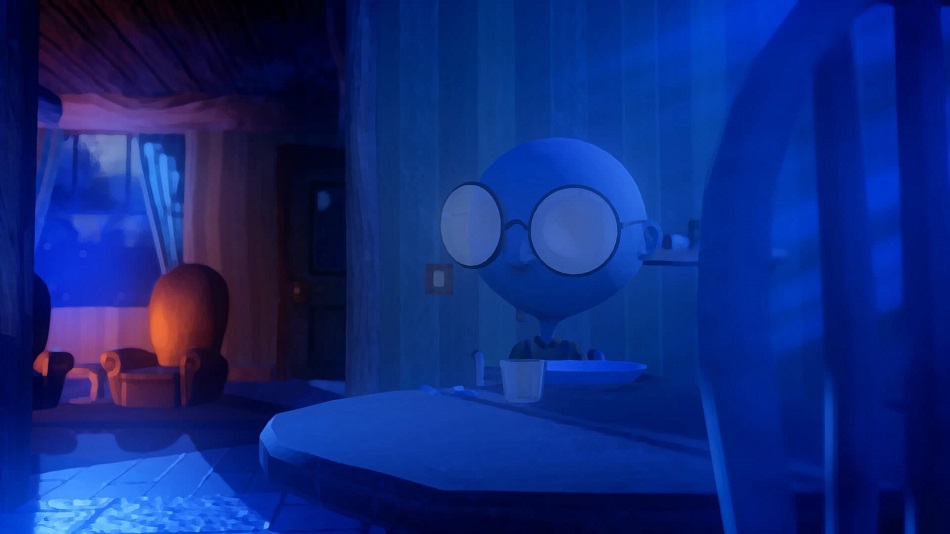 Of course, changing the timeline isn’t that easy, and fate tries to intervene. Even if the boy is appropriated to Timeline B, something else takes the place of the soccer mishap to create another accident. Players must then repurpose even more activities to prevent the accident in all possible ways.

This central puzzle element was intriguing at first, but it slowly got more irritating as I kept repeating the day. On the surface, it’s clever because players can redo the day as many times as they need to in order to use each character effectively, open the whole village, and pick up optional collectibles. However, it doesn’t take long before the repetition starts to drag.

Once I’d selected a character, I’d have to do all the day’s activities and watch the closing scene again just to go back and use a different character, at which point I’d be forced to watch their opening scene again. This got especially grating when I needed to swap back and forth between characters when one couldn’t perform some simple task that was assigned as another’s special ability. It’s occasionally obtuse in this regard.

This puzzle style, for better or worse, is the meat and potatoes here. Last Day of June is pretty short — about 3-4 hours — so perhaps developer Ovosonico feared skippable cutscenes or quick character swapping might cut that completion time in half and make for a shorter (and potentially less valuable) game. Sadly, the joke’s on them because if it had been shorter, I probably would’ve enjoyed it more.

However, I have to say that once all the character timelines were rearranged, Last Day of June‘s closing sequences were substantially more moving and powerful than I expected. As my irritation during repeat sequences mounted, I didn’t think the finale would be enough to erase it and win me over, but I found myself blinking tears out of my eyes when it was over. Ovosonico redeemed themselves.

Despite Last Day of June‘s slightly boring mid-game errands, its breathtaking art style and narrative payoff left a lasting impression on me. If it were streamlined a tiny bit more and had some fat trimmed, it would be a truly remarkable work. Although I do recommend it, there’s some room for improvement here. Rating: 6.5 out of 10

Disclosures: This game is developed by Ovosonico and published by 505 Games. It is currently available on Playstation 4 and PC. This copy of the game was obtained via publisher and reviewed on the PS4. Approximately 3.5 hours of play were devoted to the single-player mode, and the game was completed once. There are no multiplayer modes.

Parents: According to the ESRB, this game is rated Everyone and, oddly enough, contains no content descriptors. Although it might be rated E and contain a whimsical art style, I wouldn’t recommend this for young children. The story has mature moments and features allusions to pregnancy difficulties, anxiety and depression. A sequence which shows the two main characters experiencing a car crash is shown several times during the game. It’s not violent and you don’t see the actual characters make any crash impact, but it’s still dicey for young children to see. There is no dialogue in the game (characters make emotive noises instead) so there’s no bad language to worry about.

Deaf & Hard of Hearing Gamers: Last Day of June is super accessible for hard-of-hearing players. Character don’t speak in real words, they only make emotive noises, so there’s no subtitles or dialogue to miss out on. I don’t recall any noise cues either.

Colorblind Modes: There are no colorblind modes available in the options. It’s worth noting that a few scenes take place in a lakeside dock that features very oversaturated purple and orange tones. I don’t know if that would present a barrier. Most of the game has regularly colored, although whimsically designed, atmospheres. Some scenes take place at night with a darker atmosphere, but they’re not difficult to get around in.