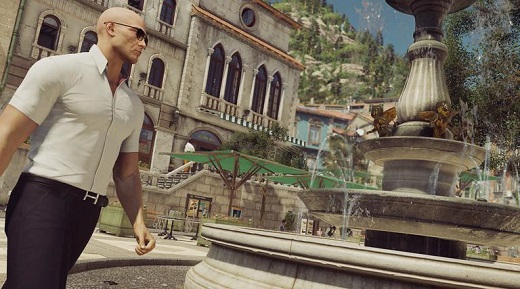 Based in the seaside town of Sapienza, Italy, Agent 47’s objectives are threefold:  eliminate a quirky scientist who’s developing a bioweapon, take out his top assistant, and finally, find a way to sabotage the virus itself. Much like the previous episode, Tomorrow feels like a mashup of everything that made older Hitman games great.

(Some inside baseball for Hitman vets: this mission is a perfect intersection of Anathema from Hitman 2, Hitman: Contracts’ Chinatown levels, and Absolution’s R&D area in the Death Factory mission.)

The area of operation in Sapienza is enormous. City blocks surround the central target’s mansion with several indoor areas. A beach and dock sit below the mansion. The mansion itself has several floors, garden areas and side buildings to explore, as well as a restricted underground lab area. My eyes lit up as the content opened with a camera pan to Agent 47 sitting on a bench in a cool white shirt, slacks and sunglasses while reading a newspaper. The whole thing has Quantum of Solace-era James Bond written all over it.

As expected, the gameplay hasn’t changed since the first episode. Players can still disguise themselves as different people to hide in plain sight, plan clever accidents to anonymously kill targets, or shoot their way in and out, which is not recommended due to the small amount of health 47 has. The only notable change since Episode 1 is that IO patched the ability to reconnect to servers immediately if players lose connection. Because Hitman requires a persistent online connection, this patch saves players from losing their progress in case of an internet obstruction. For those who want it, my review of Episode 1 contains more basic gameplay information.

Now, getting back to Tomorrow, I noticed something unexpected about it. Despite my overall like (but not love) of 2012’s Absolution, this new Hitman makes me nostalgic for it—or at least its Contracts mode.

IO Interactive has set its gameplay up so that much of the replay value is user-generated. Contracts mode, which allows players to play through a mission while selecting up to five targets and publishing that mission for others to try, was first seen in Absolution. I liked it at the time, but IO Interactive drops the ball hard here with the save system, or should I say, the lack thereof.

Although Hitman features four gameplay modes (the main campaign, Contracts, Escalation missions and Elusive Targets) players can only save their progress in the main campaign. Absolutely no saving, manual or auto, is allowed in the other three game modes, which is totally bogus.

Not being able to save in Absolution’s Contracts missions wasn’t a big deal because many of its missions were smaller, more bite-sized versions of the norm, and only a maximum of three targets could be marked. In Tomorrow we have a mission area with city blocks, immense mansion grounds and an underground lab. Since Contracts missions can feature up to five targets, I’m really supposed to do it all in one shot without saving? It’s totally ludicrous considering a single attempt at a mission could take well over an hour to execute. The last thing I want is to carefully plan how to exterminate five targets, somehow blow my cover on the fourth, and have no option but to shoot my way out or start all over.

IO also keeps pumping out Escalation missions. These are missions where players are tasked with playing a scenario five times, with a new objective added each time. It’s a novel idea, but a gimmicky way to get me to play a map multiple times when I’d rather just play the campaign. I wish IO Interactive would take all the effort they’re putting into secondary game modes and develop an extra campaign episode or two instead.

One last thing worth mentioning are the Elusive Target missions—not because they’re great, but because they’re MIA. Not only has Hitman been out for a month with two episodes released, the Elusive Target missions still haven’t launched. They’re prominently featured on the main menu screen, but I don’t even know what they are or when they’re coming out.

As far as its technical side goes, no Hitman mission would be complete without weird bugs. In my 15 or so hours with Episode 2, I didn’t notice anything as bad as Episode 1’s problems, but I did have minor issues. In some instances, targets I choked out to incapacitate would die instead of going to sleep. It happened randomly, and with different people on different attempts. It’s not the end of the world, but considering non-target kills deduct from score and certain challenges hinge on not killing anyone but the targets, it’s not good news.

In another instance of weirdness, I killed a target by placing an explosive golf ball in his practice area and he flew thirty feet in the air upon hitting it. I successfully killed him, but NPCs only reacted temporarily. Minutes after his death, I overheard his golf coach talking to a lover on the phone saying he’d come see her when the golf lesson was over. Apparently golf lessons go beyond the grave for this dedicated instructor? When I reached the second target, no one (including the target herself) seemed to even know the first mark was dead, despite him dying spectacularly in a highly-visible explosion. I figured his death would set off some kind of AI chain reaction, but no one seemed to care.

For Xbox One owners feeling burned over the Playstation 4 exclusive content, let me say that the Sarajevo Six missions are not great. They’re nothing more than a Contracts mission set in whatever current episode map has most recently launched, and don’t even get their own maps or special areas. Microsoft supporters have no reason to be jealous about missing this content.

Although I love the direction this Hitman reboot is going in (and World of Tomorrow is better than the previous episode, which was stellar) IO always seems to make one big, dumb mistake when they bring out a new project. The save system is the error here, and it’s made more frustrating considering what an easy fix it could be—saving data is not rocket science. I’m holding out hope for a fix in the future, and considering Hitman isn’t even halfway through its planned content yet, there’s a real chance it’ll be patched. Save system aside, IO keeps raising the bar and I’m looking forward to the next episode. Rating: 8.5 out of 10

Disclosures: This game was obtained via paid download and about 15 hours were spent with episode two and other game modes. The main Sapienza mission has been completed eight times and the PS4 exclusive Sarajevo Six mission was completed once.

Parents: Hitman is rated Mature by the ESRB for blood, drug reference, intense violence, strong language and suggestive themes. Although long stretches of this game can feature no violence or blood, the game is ultimately about planning and murdering people, so it’s best for mature audiences.

Deaf & Hard of Hearing: Subtitles are available and visual cues for enemies detecting you and trespassing warnings are available. The HUD makes Hitman a smooth experience for hard of hearing audiences.

Remmapble Controls: X and Y axes can be standard or inverted, vibration can be toggled and Aim Assistance is offered. However, no button remapping is available for the controller.

I am fan of Hitman, this game are really excite me, i like this game more then pub

World of tomorrow is something i am really looking forward to, thanks for giving a review.

Wow! Thanks for the run down. I quite enjoyed Absolution and have been a little curious about World of Tomorrow. I’m not a big fan of the no autosave for such large missions, but I guess it adds to the realism? Considering you spent 15 hours without completing it makes it sound like a decently long game. Or maybe it has to do with redoing entire missions over and over. Either way, thanks for sharing!

Hello GamerDee,
Just to clarify, the game does have 8 autosave and 8 manual save slots, but players can only use them in the main story mission. Secondary game modes (Contracts, Escalation) don’t allow any saving. And I did complete the World of Tomorrow mission 8 times in my 15 hours of play and I’ve played it more since the review was published. I highly recommend the new format of Hitman, including the previous Showstopper chapter that came out first.

That makes more sense. Either way, it sounds like a pretty sick game to play. I can’t believe have far this game has come from playing the original on PC. Anyhow, Thanks for the suggestions. 😉