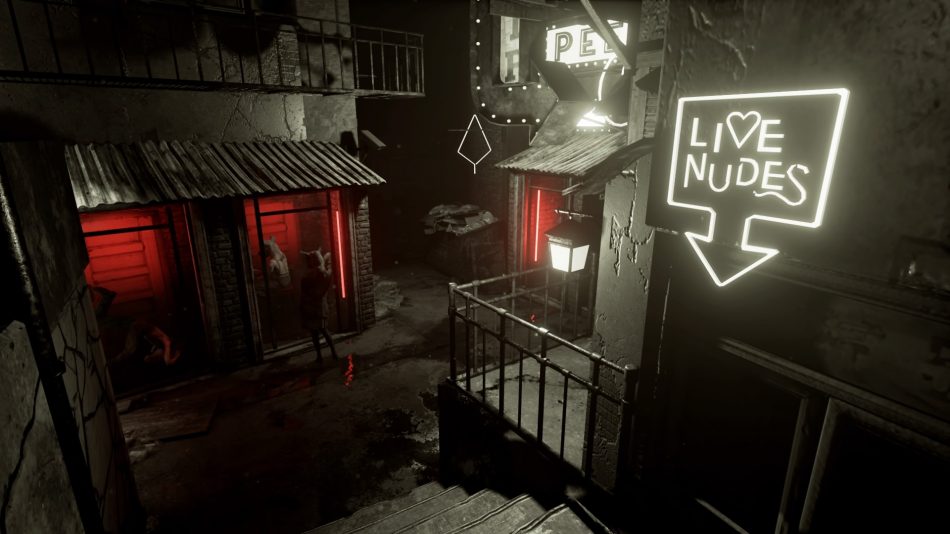 LOW The story didn’t quite come together.

When Here They Lie launched for Sony’s Playstation VR, I was bummed I wouldn’t get to play it. This first-person atmospheric horror game full of bloody subways and lurking humanoids in animal masks seemed right up my dimly-lit alley, but I had no plans for a virtual reality upgrade. Developer Tangentlemen must have heard my whimpers because four months after release, they patched in support for standard, non-VR displays, and I’m glad they did.

Here They Lie starts strong with the protagonist — a nameless, aging white guy — riding a train to a deserted station. A strong visual style washing out most of the world in a dingy grey sepia tone is immediately established. Saturated colors punctuate certain areas, such as orange fire or red neon signs.

The protagonist is in search of Dana, his previous romantic partner. As he travels, payphones throughout the environment ring. When answered, they feature a mystery man speaking as if he’s a friend, and he’ll help direct players along. Photographs and letters can also be found that attempt to offer extra creepy flavor.

I say ‘attempt’ because despite Here They Lie‘s interesting Silent Hill 2-esque story of lost love and redemption didn’t quite come together. It’s a prime example of narrative that’s either far too smart and drenched in symbolism for me to understand, or it’s just poorly-written and incomprehensible. In this case, I honestly can’t tell the difference. Fortunately, Here They Lie relies more on mood than story, and serves it up in spades. 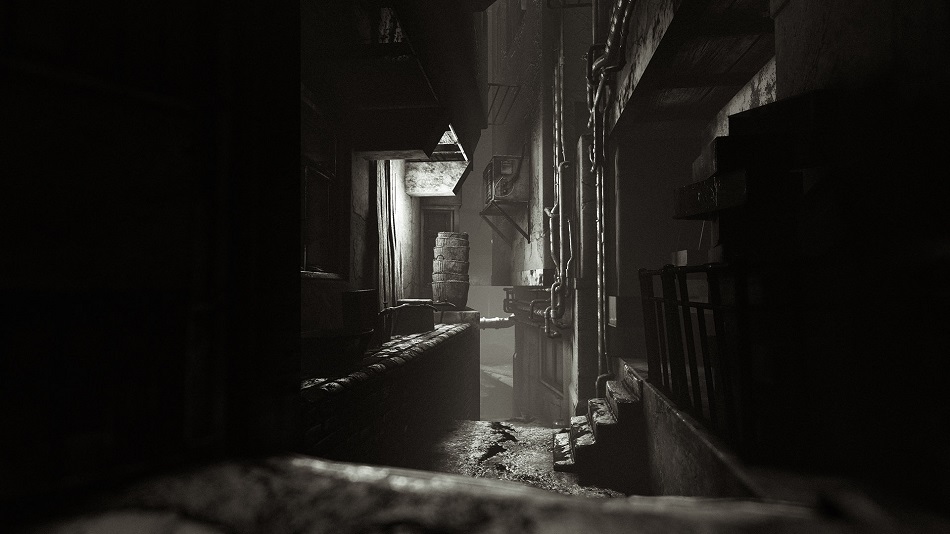 The excellent sound design in particular caused me to play cautiously. Because most of the world’s inhabitants are humanoids with animal heads, no one speaks in real words — just grunts, moans and yelps to convey their attitudes. This was particularly terrifying in one instance when I could see a box I needed to get to, but two men in wolf masks were standing close to it. As I crept closer, they pulled out steel pipes and began grunting and hollering, as if daring me to come closer and get what’s coming. If I’d played this in VR, I probably would’ve died of shock.

Another stellar example involved weird panting noises erupting right behind me as I walked through claustrophobic subway tunnels. I didn’t dare turn around to see what made the noise behind me, but thanks to some masterful level design, the tunnel reached a dead-end which forced me to turn around (ever-so-slowly!) to see if the noises were being produced by an entity or if they were just echoes in the atmosphere.

Here They Lie also does an outstanding job of holding its cards close to its vest. Oftentimes in horror games, once I figure out how NPCs react or how certain mechanics work, they’re less scary going forward. After all, a mystery is only mysterious as long as it’s not spoiled. Due to the irrational behavior certain characters exhibit, I was never sure how they’d react to my presence, and this unpredictability induced a state of constant tension around NPCs . Further, the environments don’t necessarily adhere to reality, and I never knew what to expect with each new turn in a hallway. I was always on my toes.

The sometimes-surreal environments were a double-edged sword, though. I appreciated the constant unfamiliarity of each setting, but because the narrative threads weren’t strong enough to hold them together, I never felt like I was playing a story actively building towards anything. As such, Here They Lie often comes off as just a series of abstract environments to be creeped out in. Some later level areas even involve bizarre on-rails sequences that seem more like playing through an interactive White Stripes music video than something delivering narrative payoff. In these instances, it’s easy to imagine how mesmerizing the game might be in VR, but that magic didn’t translate well to a standard display.

As a PSVR launch title from a new development studio, Here They Lie impressed me. Tangentlemen have good ideas, atmosphere and sound design, but ultimately the meandering pacing and sporadic story beats of their work left me feeling more disappointed than scared. I’ll be keeping my eyes on these developers, though — if this is what they deliver for their debut game, I’m eager to see what they serve up next. Rating: 6.5 out of 10

Disclosures: This game is developed by Tangentlemen and published by SIE Santa Monica. It is currently available on Playstation 4 for PSVR and Non-VR. This copy of the game was obtained via publisher and reviewed on the PS4 without VR. Approximately 5 hours of play were devoted to the single-player mode, and the game was completed once. There are no multiplayer modes.

Parents: According to the ESRB, this game is rated Mature and contains Alcohol references, blood, partial nudity, sexual themes, strong language and violence. Yep, Here They Lie has it all. I wouldn’t recommend it to anyone who isn’t prepared for a trippy, violent horror game.

Deaf & Hard of Hearing Gamers: Much of the game’s jump scares and suspense lie in its audio cues. There are no visual cues to aid in helping the player if he or she is hard of hearing. Here They Lie would be more difficult and lose much of its creepy atmosphere and tone without audio.

Remappable Controls: This game’s controls are not remappable. Turn and pitch sensitivity can be adjusted on a scale and Y-axis inversion is available.