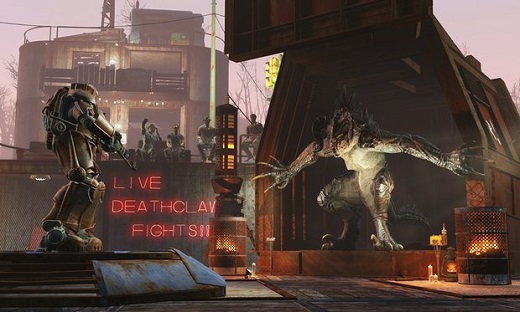 LOW No new quests to justify the new items

Fallout 4's second DLC package, Wasteland Workshop, is clearly aimed at the players who're interested in making improvements to their settlements. It features new crafting items to place as desired, and also offers new cages that can be built for catching living creatures and making them fight each other.

Most importantly, Wasteland Workshop features no new quests in any form, so it's largely cosmetic.

When I originally played Fallout 4, I was frustrated by Bethesda's lack of direction and tutorials for building settlements. I hoped Wasteland Workshop would fix that, considering most of this DLC is about settlements, but no, it doesn't. I had to poke around in the workshop menu until I found the new items before a menu popped up to tell me what the items were for.

The only tutorial menus supplied are for cages, which told me that a creature might be caught in one if I left the settlement for long enough or slept. There are cages for most entities in Fallout 4 including raiders, supermutants, cats, insects, deathclaws and more. Along with the cages, red and blue octagonal floorpads are available to build. Existing settlers or captive creatures can be bound to them, and once an entity is assigned to each octagon, they'll battle until one of them is no longer breathing.

Although some players might find the idea of catching two deathclaws and unleashing them on each other thrilling, I don't find much value here. This DLC seems produced for the kind of kids who fed bugs to spiders in their gardens, and then grew up to build deathtrap houses in The Sims to watch virtual families die in horrible scenarios.

Getting back to the workshop items, the new additions are things to place around the settlements, including generators, defense mechanisms and lighting. The most notable of the lot are neon signs. Each letter of the alphabet is available for crafting, and they also come in several different colors. The option to spell out nearly anything on the walls of settlements is available.

Although I try to judge content for what it is rather than what it isn't, it's a shame Bethesda didn't include a new quest to go along with these new items.

In the previous DLC, Automatron, Bethesda introduced robot building. It also included a 5-hour quest that gave good reason to build robots. If the quest hadn't existed, I probably wouldn't have cared for robot crafting, but I ended up enjoying it.  If a quest for Wasteland Workshop existed to justify catching animals and fighting them to the death, I would've felt more compelled to spend time gathering materials and catching critters.

Players who haven't started (or finished) Fallout 4 yet will likely get more out of Wasteland Workshop than I did, but this content was too insubstantial to keep my attention for long. Rating: 4 out of 10

Disclosures: This game was obtained via publisher review code, and was reviewed on the Playstation 4. About 2 hours were spent with the DLC.