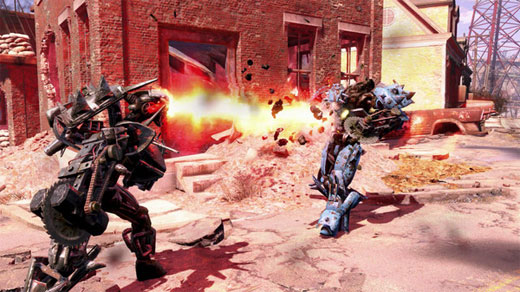 Bethesda can usually be counted on to publish high-quality DLC for the Fallout games. Since Fallout 3, most of the add-ons feature entirely new areas off of the main campaign map, complete with new storylines to follow. Automatron is the first post-launch episode for Fallout 4, and this time, things play out a little differently.

Although Automatron features a new quest, enemy types and companions, it never takes the player away from the Commonwealth wasteland. Instead, it expands upon Fallout 4's crafting system—love it or hate it—and lets players build robot companions or upgrade existing ones.

The new content begins with a caravan distress call. Upon arrival at its location, a full-scale battle is underway—Automatron doesn't mess around and gets things sparking. Once the situation is dealt with, the lone caravan survivor (a robot named Ada) asks the player to track down the leader responsible for instigating the attack.

Early on, Ada teaches the player how to build a crafting station for robots. As someone who wasn't enamored with the original crafting mechanics, making metal buddies ended up being more enjoyable than I anticipated.

In general, it's similar to customizing power armor. Players can alter the head, torso, arms and legs to create whatever kind of killing machine they desire. Enemy robot parts can also be collected after battles, which opens up more options.

At one point I turned Ada into a hot pink bipedal machine with a nailgun for one arm and flaming sword for the other. Later on I gave her an energy sniping arm and a stealthy ninja sword. Taking her with me and watching her unleash weapons I'd built was a delight, and made me feel like a proud robot dad.

I predict Automatron will be more successful for players who haven't finished the game, or for those who jump in with the inevitable Game of the Year edition later on. Going through this slice of story in the middle of the campaign instead of at the end will probably be more satisfying, especially considering the immense possibilities of building robot companions to assist for the rest of the campaign. Also, certain aspects of robot crafting require skill points that players might have already spent if they finished the game prior to this DLC. If Automatron popped up more organically mid-campaign, players could tailor their perks with robot building in mind.

As for me, I'd already put over a hundred hours into Fallout 4 and completed just about everything in it. I breezed through Automatron's quest easily, and already had enough materials to build just about any kind of robot I wanted. It was entertaining, but it didn't provide much challenge or mystery—it was just more of what I'd already been doing, plus robots. It's a good foundation for future DLC episodes, but I admit that I'm a little jealous of players who'll get to experience this when it might make a real difference in their adventure.  6.5 out of 10

Disclosures: This game was obtained via publisher, and was reviewed on the Playstation 4. About 5 hours were spent with the content, and it was completed once.

Parents: Fallout 4 is rated Mature by the ESRB for blood and gore, intense violence, strong language and use of drugs.

I loved this new content update, at least the robots provide real utility. If this had been in from the beginning what a different game it would’ve made it.