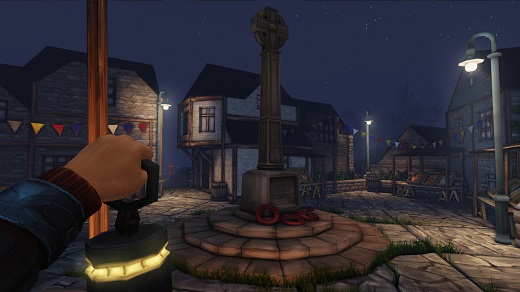 HIGH Abstract without being pretentious

WTF Gamebreaking bugs didn't get patched until a month after it hit PS Plus.

Ether One is like a middle-class Myst, and I mean that in a complimentary way.

Ether One puts the player in the role of a nameless worker for a modern, experimental medical company that lets "Restorers" (as the company calls them) travel through the memories of mentally ill patients to pinpoint moments of deterioration in an attempt to heal them. Most of the game takes place in one specific patient's mind and the player's only connection to the outside world is Phyllis, the doctor who's spearheaded this entire process.

Although she's never shown onscreen, Phyllis walks the player through environments and points of interest as he or she explores the memories. Many times her messages hint at something bigger going on in the real world. For example, players must take her word that the patient is, indeed, safe during the experiment. The faith being asked of me created a tension where I wasn't sure that I was actually doing the right thing by exploring this unwell mind.

The world is made up of four quadrants and a central hub the player can teleport back and forth to. The hub contains storage shelves for items and copies of clues found in the environment. Each area is large, and two are parts of a town that both contain a city block with several buildings to explore. Another is a multi-story factory area with intricate floors.

Although the game is devoid of NPCs, each area contains substantial amounts of environmental storytelling, especially for thorough players. On the other hand, the biggest drawback of the environments is I tended to get lost in them, even after spending a couple of hours in each because there's no in-game map to aid exploration.

The puzzles themselves are handled cleverly in Ether One because, as mentioned, most don't have to be completed to progress. It sounds odd, but the bulk of them exist simply to flesh out the patient's mind and the overall story.

In the factory area, for example, the player can make engineering adjustments throughout each building to start the production line. It's a tedious objective meant for those who love Myst's type of figure-it-out-yourself puzzle solving. The reward is extra information about the patient, the environment and clues about her condition. However, none of this must be completed in order to progress to the next area. However, be aware that every once in a while a puzzle is required to move on, and it's not always clear which ones are mandatory, especially given the game's non-linear environments.

Ether One's most exciting moments occur when abstraction heats up. As the player begins to alter aspects of the patient's mind, he or she gets funneled into unexpected and scary places. Moments from the film Inception came to mind. Although these parts represent what I love most about Ether One, I don't dare spoil it here.

Although I enjoyed Ether One, the game is based entirely on exploration, and unraveling the story is key to its appreciation. Players who don't have the patience for this sort of slow-burn adventure might find that things are fairly incomprehensible if they don't take the time to do some of the non-essential puzzles. However, those who find the idea of a casual stroll through someone's mind would do well to check this one out. Rating: 8 out of 10


Disclosures: Ether One was downloaded as a free PS Plus title on the Playstation 4. Approximately 8 hours were devoted to the main campaign and it was completed. There is no multiplayer.

Parents: Ether One is rated E for Everyone by the ESRB and contains alcohol and tobacco references and mild language. This game is suitable for all audiences.

Deaf & Hard of Hearing: Subtitles are available for all in-game dialogue. Because Ether One is entirely exploration-based, no audio cues are necessary. However, some in-game clues feature audio cues as the player gets closer to the clue. Gameplay might be slightly more difficult because of this, so track down an FAQ if needed.

As if “pretentious” meant anything else than “I am in a bad mood because I sense some people are understanding something more than I about this, and my pride wants to fire back”.

(Now of course such things happen much more frequently with abstract content than otherwise.)

Great review. I loved this game when I played it last year, and like you I thought some of the best moments are the pangs of uncertainty when you began to doubt Phyllis’ sincerity or the shock of seeing what altering the patient’s memories created. Also agree a map would have been very useful, especially in the mines.

Strange that it still suffered game-breakers; you’d think those would have been fixed given the time to port to PS4.