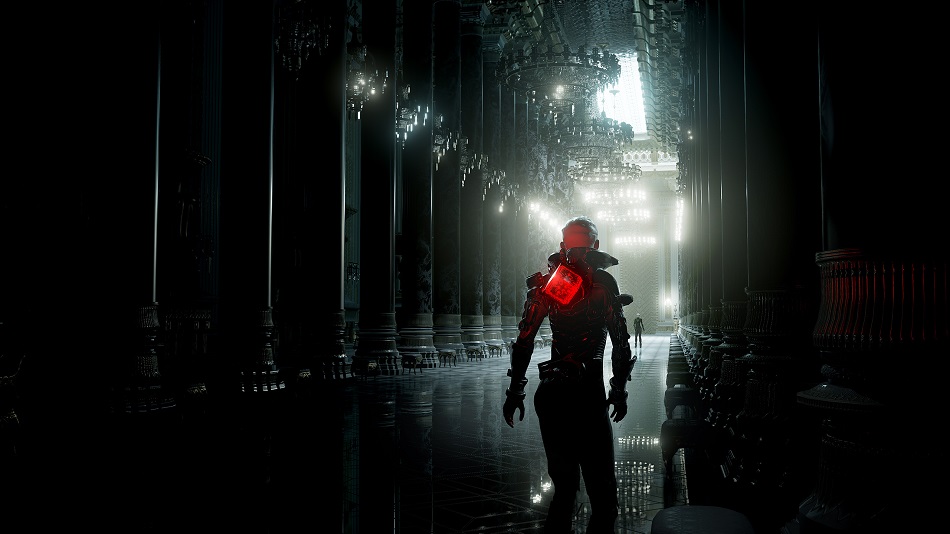 WTF The protagonist’s name is… En?

After playing games for more than twenty years and writing about them for more than ten, it’s rare to come across something that feels unique and fresh. I go through dozens and dozens of games each year, and only a tiny slice feel truly innovative. As such, my hat is off to Echo because it’s in that tiny slice.

Echo, the first game from Ultra Ultra (comprised of former Hitman developers) is as slickly designed as it is intriguing. Players wake up as En, who’s been in stasis for a century aboard an AI-controlled spaceship. London, the ship’s AI pilot, is the Jarvis to En’s Iron Man, except that they disagree on everything. Where her flippant positivity borders on being near-religious, London remains her pragmatic, often cynical foil.

En and London’s journey through space leads them to a structure En believes will help resurrect Foster, a mercenary who risked his life to help her out of sticky situation several years ago. Upon reaching the planet, her expectations are turned upside down — despite a drab decaying facade, the structure’s inner workings reveal an elaborately ornate palace. Gold statues, high-end furniture, pianos, harps and brightly illuminated panels run the lengths of its maze-like halls. It’s somewhere between Tron and 2001: A Space Odyssey, but maintains its own identity.

After a deliberately slow-paced and mysterious intro, things heat up when En realizes the palace has a mind of its own, and it creates duplicates of her that patrol the environment. At first the doubles act like zombies and are barely able to walk, but every few minutes, the palace completely powers down. After each blackout, the clones become more fully formed and begin learning En’s moves. In short, players teach the duplicates how to hunt En based on how they play. 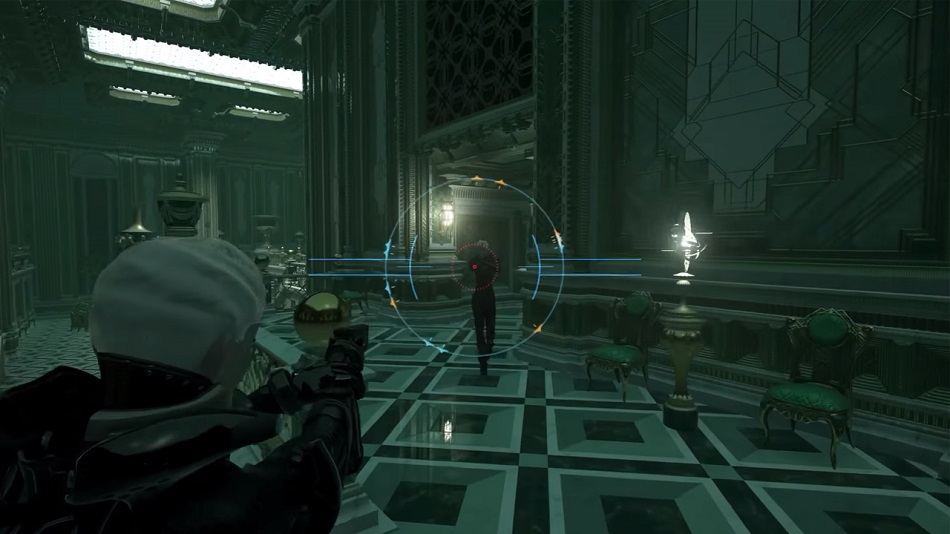 To stop the duplicates from copying all of En’s moves and having a full arsenal early on, they only mimic her moves from the time before the last blackout. So, if I noticed the clones were getting too trigger-happy, I could lay off my gun for a wave and after the next blackout they’d put theirs away, too.

These clones pick up on other inputs as well. Some areas feature water reservoirs, and the echoes won’t step in water until En does. They also won’t open doors, climb up small ledges or drop from balconies until they see it being done. Diversionary behaviors can be copied to the player’s advantage too — if I stop to have En hit a few piano keys or stroke a harp, the echoes will experiment with their own musical artistry (and pay less attention to me) in the next wave. The precise, strategic movement choices make Echo feel like a board game.

Because shooting through the adventure would be too easy, Ultra Ultra has put safeguards in place to make sure Echo doesn’t become a full-on run-and-gun. En’s pistol draws energy from her futuristic space suit for ammo, and she only starts with enough juice for two shots. The last one always regenerates (slowly) and more capacity can be acquired through pick-ups. She can also choke out echoes if she sneaks up on them, or she can use small, single-use crystal ball ornaments in the environment as lethal melee weapons. 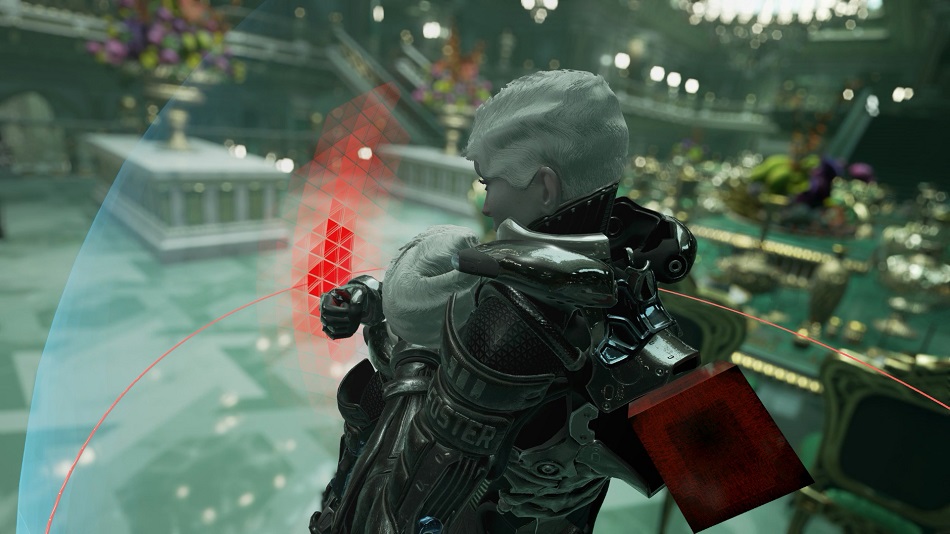 Ultimately Echo was a thrilling, fly-by-the-seat-of-my-pants ride for most of the campaign. I felt pressured to be quick, strategic and efficient while carefully choosing each move I made knowing the echoes might turn those moves on me after the next blackout. And if I made one mistake or an echo detected me? Things would start snowballing into oblivion unless I found a solution, fast.

As much as I love Echo, it’s not without faults. For example, the beginning is well-paced, but the narrative keeps getting pushed further and further aside as the game goes on. The developers spend a lot of time setting up En’s backstory, how she was born into a snooty, competitive upperclass society and why she ran away from it, but this whole thread is just, kind of, dropped? Effort is made to build interesting layers of lore and then Echo takes them nowhere.

Also, it has to be said that the hook of an AI that copies actions is a one-trick pony, though a great one. However, it doesn’t evolve as the game goes on,  it simply gets more difficult instead of more interesting. I would’ve loved to see En acquire a new gun or new melee attacks to even the odds against increasing numbers of enemies, but her moveset is basically the same at the end of the game as it is in the beginning — a problem when, for reasons never explained, bigger, more difficult echoes start appearing and En’s moves are nearly useless against them.

Between the disappearing narrative and fairly static gameplay, the campaign starts running out of steam toward the end and ends up about two hours too long. While playing, I never had a clear idea of how far I’d come or how much I had left to go, and the last leg was too difficult, too repetitive and too drained of its story. Ultimately, it felt like the writer penned about 70% of the story then stopped cold, and then the devs finished the project with what material they had.

Although Echo fizzles out instead of building to a crescendo, I still loved it. I mean, we’re talking instant entry into the Top 5 games I’ve played this year. It’s just a shame that Ultra Ultra didn’t keep layering in mechanics and that the story lost focus. However, despite these issues, Echo remains an incredibly strong debut from a developer I’ll be keeping my eye on in the future. Rating: 8.5 out of 10

Disclosures: This game is developed and published by Ultra Ultra. It is currently available on PC and PS4. This copy of the game was obtained via publisher and reviewed on the PS4. Approximately 7 hours of play were devoted to the single-player mode, and the game was completed once. There are no multiplayer modes.

Parents: According to the ESRB, this game is rated Mature and contains Violence and Blood. Echo does contain those, and also mild language, which is left out of the official ESRB description. The light blood is probably the only thing pushing it into Mature territory — Echo is considerably less violent than some Teen-rated games I’ve played (*cough*Uncharted*cough), but it’s still probably not suitable for kids.

Deaf & Hard of Hearing Gamers: I found Echo to be pretty accommodating with the sound turned down. En, the protagonist, has a sphere-like HUD interface that surrounds her body if there are threats around. Parts of the sphere glow blue, yellow, orange or red depending on how close and alert enemies are to her. The music alters slightly if an enemy starts becoming aware of En, but the sphere allows for total visual awareness of enemies around her with no sound. Subtitles also exist for all dialogue.

Remappable Controls: No, this game’s controls are not remappable. The Y axis can be standard or inverted, and the camera sensitivity can be adjusted on a scale.

Oh man, this looks great! From Hitman vets as well – one of my all time favourite series. Shame the mainstream game sites aren’t making more noise about this game though, I guess “How to level up quickly in Destiny 2” is more appealing to mass market than what Ultra Ultra have crafted here. Also, Activsion has a ton of money. You’re shocked, I know.