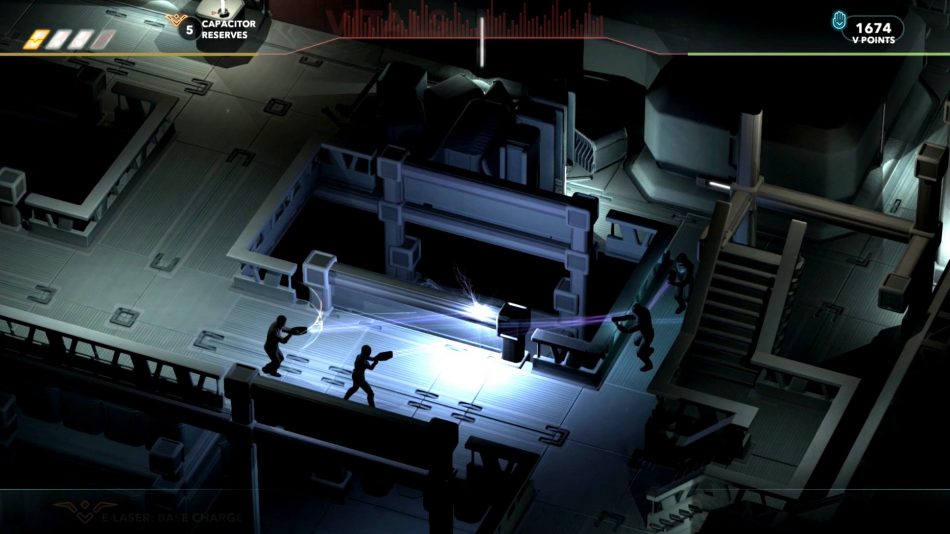 LOW Enemies shooting me from offscreen.

WTF A bad map, no waypoints and no objective markers?

Divide is a classic example of a game that starts strong, only to slowly disintegrate into mediocrity.

It begins with an interesting premise — David, an average middle-aged guy gets a call from someone who used to know his deceased wife. The two meet and David receives a briefcase that belonged to her. He returns home, opens the case and finds some augmented reality contact lenses along with a weird orb that transports him into a futuristic science base. Now he must escape the complex, and also find his daughter who vanished during the transport with him.

Divide’s camera is isometric, and it controls like a twin-stick shooter, although leans more toward exploration than combat. There’s little sense of urgency as David explores the facility, reads emails, hacks robots and accrues items for future use. For a while I enjoyed exploring this slick sci-fi world — I got the same sense of creepy satisfaction I did from hacking computers in Deus Ex: Human Revolution and checking emails for deep, dark secrets. However, once Divide gets the ball rolling, it starts rolling straight downhill.

Because David’s been transported into a lab environment, certain areas are walled off until he gets clearance codes. When he gets the codes, more areas become accessible, and he can eventually start backtracking to find new things in old areas. This would be all well and good if Divide helped me keep track of objectives, but it fails hard here. 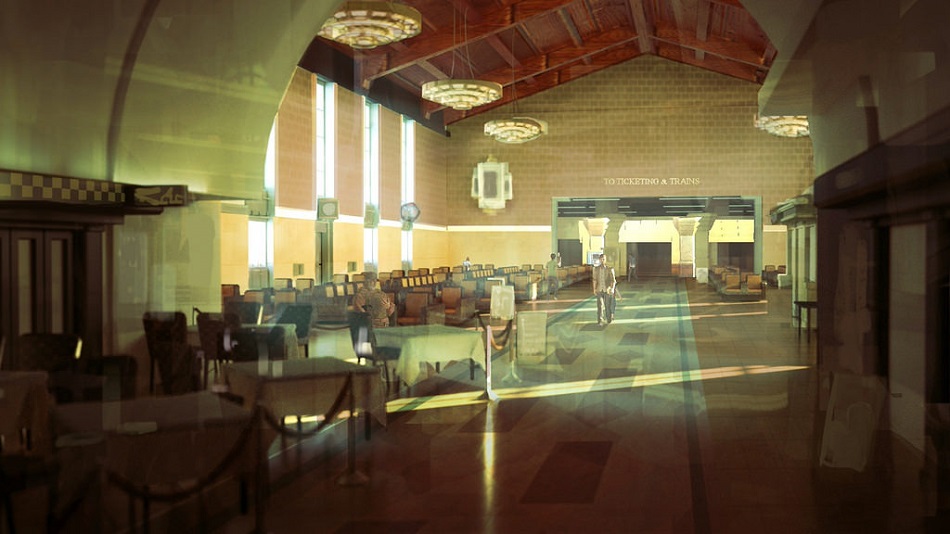 The map menu, for instance, is a small, terrible-looking schematic that can’t be moved, zoomed or rotated for better detail. While a small star showing David’s position is visible, the rooms and halls all look alike and no waypoints or guides exist to point him in the right direction. After a short while, trying to find my way through the mazelike environments felt hopeless, and probably half of my total playtime was simply wandering around, trying to locate the next goal.

Further into the adventure, human enemies show up and traditional combat surfaces. David is extremely fragile and dies after two shots from an enemy gun — making things worse, enemies are masters of quick-draw with 100% accuracy. I would often lose half my health before having a chance to react. David’s stun gun (his only weapon against humans) takes several seconds to charge between shots, and it takes two or three shots to incapacitate an enemy. Combine that with inaccurate aiming and no lock-on, and I died nearly every time I couldn’t run from an enemy encounter. Oh, and enemies frequently shoot David from offscreen — that’s always a joy.

I thought between the labyrinthine lab areas, lack of direction, fragile protagonist, bad aiming mechanics and nearly unreadable map, I’d discovered everything bad with the game… But no, Divide had one last trick up its sleeve.

After being bottlenecked by off-screen enemies and being unable to progress, I came to the conclusion that Divide was too tough for me. I didn’t think I’d be able to finish the game before writing this review. My hopes lifted when my PS4 downloaded a patch, and I fantasized that the developers had fixed some things — maybe they added waypoints, maybe the map could be maneuvered for clarity, maybe aiming would be smoother — but no. All the update patch did was corrupt my save data.

Honestly, I guess that data corruption was a blessing in disguise because now I don’t have to suffer through this poorly-designed, buggy mess anymore, and I’m sure as hell not going to start a new game now. A good experience is buried somewhere in Divide, but it will never come to fruition in its current state. Rating: 3.5 out of 10

Disclosures: This game is developed and published by Exploding Tuba Studios. It is currently available on Playstation 4. This copy of the game was obtained via publisher and reviewed on the PS4. Approximately 5 hours of play were devoted to the single-player mode, and the game was not completed. There are no multiplayer modes.

Parents: According to the ESRB, this game is rated Teen and contains fantasy violence and language… and it’s all technically true. There’s no blood or gore, but humans occasionally shoot at each other with stun guns. Divide is pretty tame.

Deaf & Hard of Hearing Gamers: Divide would be slightly more difficult without sound. Sometimes enemies and sentries make noise if they’re in close proximity to the player, and there are no visual cues on-screen to signify this.