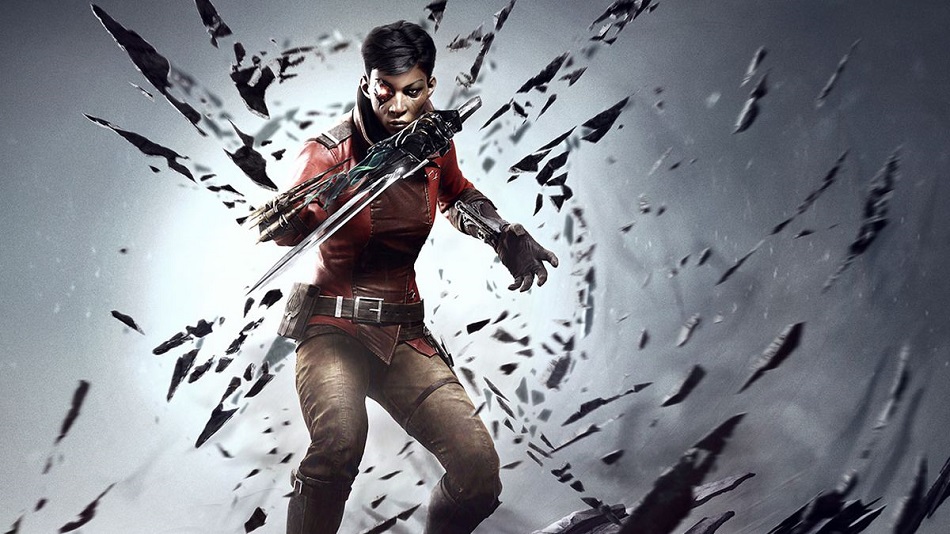 Reviewing post-launch add-ons or downloadable content sometimes feels like a superfluous venture. More often than not, story-based DLC just ends up existing as more of its progenitor. It’s not really the place for developers to try new unique ideas, and, odds are, the only people playing the DLC will be those who enjoyed whatever came before it. However, post-launch DLC does tame the thirst for new stuff to do for a fraction of a full-priced purchase, and to this end we have Dishonored: Death of the Outsider — a standalone expansion tying a bow on the stealthy-action franchise originally launched in 2012.

Arkane originally approached DLC in a clever way by using it to unfold supporting characters’ stories rather than giving players even more of protagonist Corvo’s adventures.

For Dishonored, two story-based add-ons had players controlling a villain. It turns out that bad boy Daud had demons of his own, and fans were able to explore his side of things over several levels. Not only did these add-ons put players in a new set of boots, they also introduced a key character to the franchise — Billie Lurk. Now in Death of the Outsider, players step into her shoes on a quest to reunite with Daud after nearly two decades apart.

Death of the Outsider doesn’t add anything incredibly new or interesting to the Dishonored franchise, but that’s hardly a complaint. It remains a first-person adventure where players are open to decide when and how to accomplish objectives at their own pace, and objectives can often be solved in many different ways. It’s possible to dash in with a sword and crossbow and leave Karnaca’s streets bathed in blood. It’s also possible to sneak through the whole game undetected, only interacting with a few targets and exiting with none the wiser. Or, any combination between the styles can also work.

Anyone who’s familiar with Dishonored, Prey or Deus Ex knows what they’re in for here, but Arkane staying in their comfort zone isn’t a criticism. I love Dishonored, and this is exactly what I thought it would be — more of the same. The only asterisk here is that it’s much more of the same. For a shorter standalone experience, I expected maybe three missions as most, but Death of the Outsider features five missions that all contain sizable maps and several methods of completion. I spent about 12 hours in my first playthrough, then immediately dived back in for a second run.

Something I’ve noticed is that Arkane finds ways of tweaking their characters’ supernatural abilities to suit them with each entry in the series. In the original Dishonored, Corvo’s starting ability was Blink — basically a teleport. In a small adjustment, Daud had a similar teleport in his DLC, but time halted while aiming for his desired destination. Emily in Dishonored 2 had phantom arms that reached out, grabbed a surface and pulled her toward it, and these arms could also grab items and bring them to her. For Death of the Outsider, Billie’s version of the teleport allows her to place her silhouette somewhere and, as long as it’s within range, she can wait to trigger it. 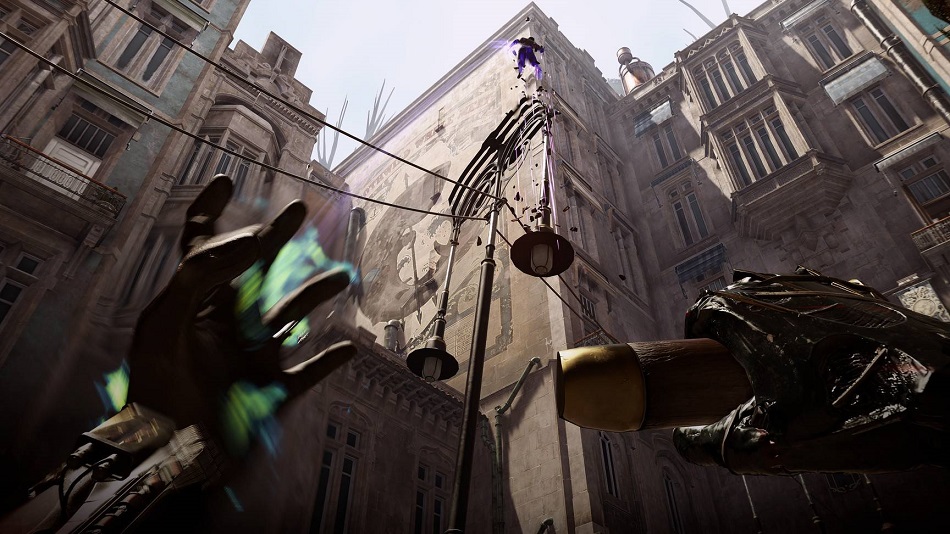 These variations on the same ability might sound like gamified semantics, but they all feel distinct enough to have their own flavor. Another common ability in Dishonored’s universe lets players temporarily look through walls and see enemy outlines. Billie’s version actually pauses time and lets her sight leave her body for an omniscient view that can be floated around the environment to mark enemies. Furthermore, her teleport silhouettes can be placed while flying around the environment, transport, so linking these abilities in clever ways adds an additional level of strategy that spices up standard Dishonored play.

Other than Billie’s power tweaks that make them her own, Death of the Outsider streamlines things to make the content feel like Dishonored-Lite. For example, in previous entries, characters’ mana meters had to be refilled with potions, but Billie requires no potion. Her powers always recharge completely. Also, past titles featured runes planted around the environment to be used as a currency for upgrading powers and abilities, but nothing on Billie can be upgraded outside of some minor armor, weapon and stealth upgrades purchased at black market shops.

Interestingly, bonecharms, a staple in the series, still exist that offer permanent buffs such as slightly more health or quieter running. These can be equipped and swapped out anytime during gameplay. However, despite bonecharms existing in all the same places in the campaign during repeat plays, the specific powers they hold are randomly assigned. So, it’s possible to get that extremely helpful high jump in the first mission in one play and not find it until later in the game in subsequent plays. In addition, the last mission is loaded with bonecharms, and it feels like a waste to have so many of them in the final area when given such a short time to use them.

This might not seem like an issue for those planning to do a New Game+ run, but for some incredibly annoying reason, none of Billie’s powers carry over. Instead, the game starts over with supernatural powers swiped directly from Dishonored 2, omitting all the black market upgrades, bonecharms and weapons that were previously earned.

It’s also worth mentioning that some Trophies need Billie’s standard powers to complete. I thought I’d start a new game+ and clean house on the Trophies, but nope. Perhaps even more disappointing is that my favorite power from Dishonored and its sequel — one that makes bodies vanish into dust as soon as players kill them — isn’t anywhere to be found. Talk about dropping the ball, Arkane.

At this point it must be said that if my biggest nitpick with Death of the Outsider is how it handles some New Game+ options, then that’s a pretty small complaint, and it’s true. Although Arkane hasn’t served up much I haven’t seen before here, stepping back into the world of Dishonored to sneak around, rummage through people’s belongings, teleport across rooftops and choke the occasional guard out is a delight.

Although this is ultimately just more Dishonored,  fans now have five more missions to play and some new powers to test out. Those who didn’t like the original games or who feel burned out on the franchise won’t find anything here to change their minds, but if this is, indeed, Arkane’s sendoff for the series, they went out on a good note. Rating: 8 out of 10

Disclosures: This game is developed by Arkane Studios and published by Bethesda Softworks. It is currently available on PS4, Xbox One and PC. This copy of the game was obtained via publisher and reviewed on the PS4. Approximately 21 hours of play were devoted to the single-player mode, and the game was completed twice and played some beyond that. There are no multiplayer modes.

Parents: According to the ESRB, this game is rated Mature and contains Blood and Gore, Intense Violence and Strong Language. Although it’s possible to play the entire game without killing anyone, violence can get quite graphic should combat occur. Sword swipes often dismember enemies, and explosives can cause enemies to explode into pieces. Mature language, and alcohol and drug references pop up, as well. This game is not suitable for kids.

Deaf & Hard of Hearing Gamers: Dishonored: Death of the Outsider would be slightly more challenging for hard of hearing players, but not exceptionally so. When enemies start becoming alert to the player’s presence, a visual cue pops up over enemies’ heads to coincide with the audio cue. In a few areas sounds give a clue that traps are around in the environment (such as the buzzing of electricity near a tripwire) and no visual cue aids that. Subtitles are available for dialogue, but occasionally players have to be somewhat close to another character (such as unimportant NPCs wandering the environment) for the subtitles to pop up.

Remappable Controls: No, this game’s controls are not remappable. Three controller presets exist, the Y axis can be inverted or standard and the X and Y axes’ sensitivity can be adjusted on a scale.

For Deaf gamers, enemies can surprise us “warning” since we can’t hear their footsteps. One solution is to use the Foresight ability and mark every enemy you see. Once the Void for Foresight depletes, you will be able to see the marked enemies through walls and such.

Mark B
Reply to  Mark B

…surprise us (without) “warning”…