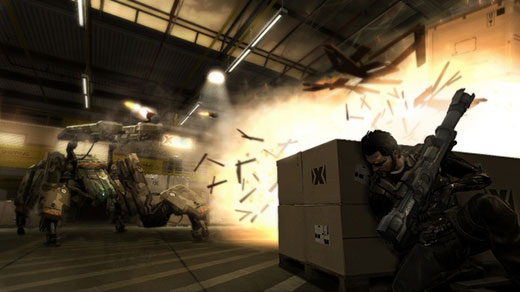 HIGH This is the best version of Human Revolution available.

WTF Occasional drastic pop-in that didn't exist in the original.

is a refined version of Eidos Montreal's well-received 2011 title. The DC features a wealth of content that was previously only available from preordering the original, but the most obvious reason for a Director's Cut? Altering the widely-panned boss battles in the first game.

The problem with them was that in the first version, Eidos Montreal had outsourced the boss encounters to another studio and they didn't fit with the rest of the game. Throughout the campaign, players could cover-shoot their way through a level or be stealthy, hack computers or turrets, or simply tranquilize enemies instead of killing them. In stark contrast, the original's boss battles were heavily action-focused with no options for hacking or knocking bosses out, so they put stealthier players at a distinct disadvantage.

Now in the Director's Cut's redone version, the first boss (Barrett) features a much larger main room with more cover, side hallways with a few rooms to move through, an entire second-floor, air ducts to escape into, and turrets that players can hack to their advantage. The expanded area makes the boss encounter easier, but still keeps the intensity as it turns into a more cat-and-mouse experience. There are also weapons scattered around the map and several explosive barrels to accommodate players who might enter the fight with little ammo, or only non-lethal weapons.

Federova, the second boss, used to take place in a tight circular room with little cover. Now there's a side stairway that can be hacked open to reveal a second story directly above the first, with a glass floor to track Federova's (often cloaked) movements. Gas valves on the second floor can be used to stun her on the first, or if she comes upstairs, the player can shoot the gas pumps to flood the top floor and catch her off guard. Two turrets also hang on the second-floor ceiling and can be hacked to attack her. I found Federova's fight still difficult, but it's far deeper than it was before.

Namir, the third boss, also has several side rooms, second-floor rooms, balconies and vents to explore. Many more weapons are scattered around the fight arena, and two mobile robots can be hacked to follow and attack Namir.

Human Revolution's final boss remains unchanged, from what I could tell. Given that the fight already includes ways to hack and that the player is fighting an immobile enemy, it's not surprising that it was left unaltered.

Also included in the Director's Cut is all of the preorder weapon packs, which include a silenced sniper rifle, a fancy double-barreled shotgun, a grenade launcher, remote explosives and an auto-hacking gadget. Unlike the preordered version, players don't automatically start with these new items at the beginning of the Director's Cut. Instead, they're found in the game world or can be purchased from merchants at several points. The grenade launcher, however, is still given to the player after the short bonus mission from a character in the game after completing it.

The Missing Link, a post-launch DLC mission is now seamlessly integrated into the main campaign. Players who bought The Missing Link will remember that at its beginning, the game strips players of all weapons and augmentations. Now that it's integrated into the campaign, the player is still stripped, but at the very end of the mission, a weapon box is available to pick up every item that was taken away, including every upgrade kit collected over the campaign. I was worried the DC would cheat me out of upgrades I had previously purchased, so this was a relief.

What wasn't a relief was that I discovered that any weapons the player spent time upgrading in the previous games are gone. By the end of my first game I had a completely upgraded pistol and rifle, and they were nowhere to be found  when I began the New Game+. Bummer.

Also included is an optional in-game commentary from several development team members. As the player progresses through the game, incoming transmission cues will appear in the top-right portion of the screen with the option to play or skip them. If they're played, members of the team will begin talking about the segment the player is at. It's a game's equivalent to movie commentary, and I found the discussions among the developers and writers informative and entertaining. The commentary isn't inserted in the most logical way, though.

For instance, there are no visual cues for where the commentary can be activated aside from the HUD pop-up, so I would stumble around in search for the cue to come up in the corner before I could play the audio. It's also possible to play the same commentary track twice, and it's impossible to skip them once they start. Worse, if an in-game character says something to the main character during a commentary track, the track stops permanently and the player must find the cue and start it again. This commentary should've been integrated much more elegantly, especially considering the Director's Cut launched almost two and a half years after the original.

The final addition to the Director's Cut is second-screen availability.

In the Wii U version, the gamepad screen is the second screen. On PS3, a Vita can be used and on Xbox 360, any tablet or smartphone with Microsoft's SmartGlass app will work. However, I reviewed the game on an Xbox 360 and the SmartGlass second screen features did not work at all in any way, shape or form. The second screen is supposed to be available for inventory management, hacking, in-game map usage (without having to pause the game) and, according to the options menu, a tablet can be used instead of a controller to operate the entire game. I don't know who would prefer that, but the option is there.

When I originally began, I had my iPad 2 with the SmartGlass app open. The game's options menu has an entire tab that explains SmartGlass features, but I couldn't get the game to recognize my tablet. I could still use the tablet to control the Xbox's interface menus, but couldn't figure out how to use it for uman Revolution's second screen features. The baffling thing is when SmartGlass is open, it shows the current game in the 360, and it didn't differentiate the Director's Cut as a separate Deus Ex. It still showed that I was playing the original Deus Ex: Human Revolution. Raptr, an online gaming social network, also doesn't recognize the Director's Cut as a separate title.

I can't attest to second screen support on other consoles, but the 360's is completely broken. Second screen wasn't a feature I was highly anticipating, but when a feature like that is plastered on the back of the physical box and it doesn't work, red flags go up. Worryingly, the DC was an under-the-radar release for Square Enix, and I'm concerned it will never get patched.

Even with the second-screen setbacks and the wonky in-game commentary, the Director's Cut

of Deus Ex: Human Revolution is still the best version of the game. Players will no longer be hampered by ill-fitting boss battles, and they'll be treated to new weapons and a 5-hour DLC mission to boot. Rating 8 out of 10

Disclosures: This game was obtained via retail purchase and was reviewed on the Xbox 360. Approximately 35 hours of gameplay were devoted to the single-player campaign, and it was completed once. There are no multiplayer modes.