Par for the corpse 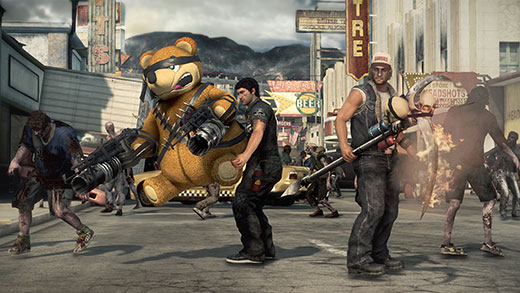 I'll preface this second opinion by saying I've never been into the Dead Risings. I played about an hour of the first two, and never got hooked. The third time's the charm, I suppose, because I played Dead Rising 3's

entire campaign… for better or worse. As I chopped, shot and stabbed my way through rotten flesh, I kept sensing it was the zombie-game equivalent of Saints Row, just not as good. Among other, more serious zombie titles, Dead Rising is just a silly romp.

Main character Nick Ramos is a mechanic in Los Perdidos, an island recently overtaken by the undead. Luckily, Nick's crafting skills are sharp. Any time a player discovers a weapon or vehicle blueprint, Nick can whip it up using the right components in seconds—we're talking anything from simple stuff like a flashlight strapped to a gun, all the way up to a propane tank/traffic light staff that shoots sparks and flames. Despite the variety available, I used the same few items repeatedly, because why would I shoot floppy, ineffective dildos out of a leaf blower at enemies when there's a flaming scythe in my back pocket? In fact, my rough estimate is that 99 percent of Dead Rising 3 is weapon crafting and killing, so it's one of those games where 15 minutes of it represents the entire package, and by now, Capcom has zombie killing down. As such, it's a shame other areas of the game aren't as polished.

For example, traveling among the city's quadrants is often lame. The layout of Los Perdidos is four city chunks in each corner linked by four stretches of highway. Not only is it boring, but roadblocks along most highway segments actively discourage riding Nick's custom-made flame-shooting motorcycle steamroller to different city hubs. It's as if the game is showing me all the fun toys I can make, but then pulls back on the leash as soon as I start enjoying anything.

Another example of buzzkill is its abundance of locked doors. I'd often approach a building only to find it locked until the story said it was OK to enter later. Sometimes I'd run the perimeter and find a window I could break, but could not jump or crawl through. This problem is only made more baffling by the fact that the first objective in Dead Rising 3 requires players to use a wrench to break a gate open. Yet later in the game, the rocket launcher Nick carries can't blow a house's door down? Give me a break, video games.

Irritation exists on a larger scale as well. As the game unwinds, tasks pop up all the way across the map, and Nick will have to find or build a vehicle and travel across a boring, zombie-filled highway to get there, unless the player would rather run, which is always a lengthy hassle. I'd often completely skip side quests if they were in a different section of the island, due to my own impatience. I often hoped a helicopter or jetpack blueprint would pop up to make traversal easier, but one never did.


Disclosures: This game was obtained via rental and reviewed on the Xbox One. Approximately 10 hours of play were devoted to the single-player mode, and the game was completed. No time was spent in multiplayer modes.