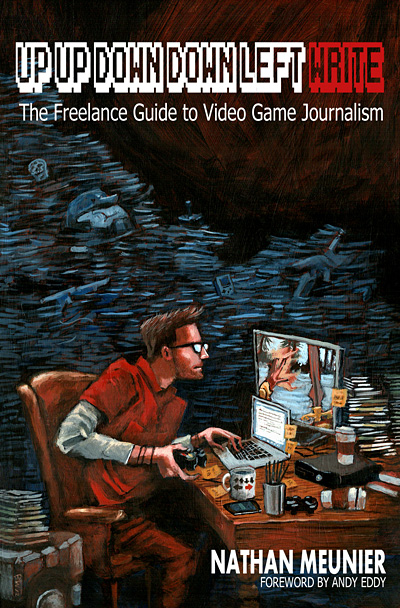 Up Up Down Down Left WRITE: The Freelance Guide to Video Game Journalism
Written by Nathan Meunier

After a successful Kickstarter campaign for his debut guidebook, Nathan Meunier's Up Up Down Down Left WRITE: The Freelance Guide to Video Game Journalism

seeks to unlock a few of the mysteries that lie hidden within the world of freelance video game journalism. Over the course of 32 chapters, Nathan takes us through the myriad ups and downs of working in the industry with his laid-back, yet straightforward style. Expect concrete advice and more nerdy references than you can shake a bat'leth at.

Meunier's approach here is that of a friendly and welcoming veteran, trying to help green beginners to put their best foot forward while protecting them from the potential pitfalls that could wind up leaving them stuck at the starting line.

It's also worth noting that the book's value is not solely limited to the freelance game writer spectrum, either. Indeed, a significant portion of the advice and information provided by Meunier equally applies not only to those interested in going freelance in any particular field, but also to anyone considering starting their own business.

For each industry-specific chapter with advice on attending game conventions, there's another focusing on accurately filing self-assessment tax forms, for example. Meunier is careful to excuse himself from liability regarding legal expertise, of course, but there is much to be learned here for those who believe that freelancing is as simple as "do stuff, get paid." Oh, would that it were true!

Unusual though it may sound, some of my favorite parts of the book were those that focused upon the darker and less glamorous sides of the profession. From waiting weeks and weeks for payment, to the ego-crushing realities of failed pitches, Meunier is careful not to sugar-coat the freelance world even one iota. Indeed, at frequent points throughout, he sounds the alarm bells ring loud and clear that this kind of work is not for everyone, and that the luster of "getting paid to play games" has a shine that soon fades when your home and well-being are on the line.

A highlight from the more positive end of the spectrum is Meunier's crash course in writing good pitches—easily one of the hardest parts of the freelance profession.

There is some repetition of ideas between chapters, but this seems geared towards reinforcing his most key points, such as the super-effective practice of "being polite." That said, there was never a time where I felt patronized, nor that Meunier felt over-important. This book is akin to sitting down for coffee with an expert, and listening to them talk shop.

Time and again, the book offers simple and yet startlingly powerful pointers to the reader. For those who have already invested time researching the prospect of moving into a freelancing career, some of the advice offered within will be obvious, but there is no doubt that Meunier's book is a must-have.

Whether it's the pleasure of nodding and agreeing on best practices, empathizing and commiserating with being "that guy," or simply screaming in horror at the prospect of a month-long ramen diet, Up Up Down Down Left WRITE: The Freelance Guide to Video Game Journalism

will provide readers with plenty to delve into. Rating: 8.0 out of 10.


Disclosures: This book was obtained via the author and reviewed on the Kindle. Approximately five hours of reading was devoted to it and it was completed.