Did You Know that Only 75% of iPhone Users Download Apps? 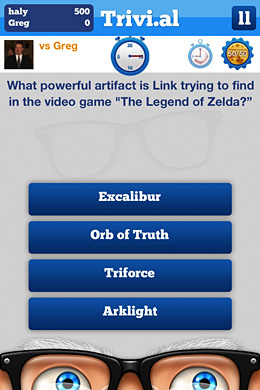 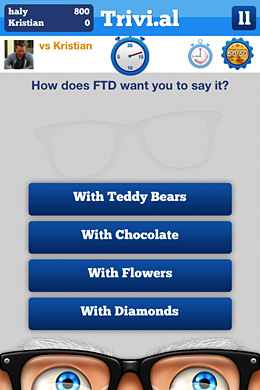 HIGH Getting 7 correct answers in a row.

LOW The game crashing when I got 7 correct answers in a row.

WTF The feeling that my random opponents were imaginary.

I love a good spot of trivia, I do. I am of renown for my proclivity to store only the most irrelevant and useless facts in my brainbox. Given the opportunity to investigate an iOS App specializing in trivia questions, I felt compelled to heed the call.

MobileFWD are the latest developers to throw their hat into the ring, trying to grab some of the fanbase ever-dwindling from Draw Something. Their entrant is Trivi.al.

Play consists of answering a series of questions, and then matching your answers against an opponent. The most correct answers wins. There are three categories: Facebook Friends, Random Foe, and Search by Username. Devoid of a Facebook profile, I played against random foes, and against the username of a certain Brad Gallaway, too. This is where the problems began to surface.

Asynchronous play is an excellent avenue for the casual gamer, but it falls apart when you have no-one to be asynchronous with. Every “random foe” I was matched up with introduced me to a person using their full, real-life name and a photograph of themselves. It begged the question whether these people were actually real or not.

Their failure to respond to turns only served to discourage my faith.

For a new app just beginning, a dearth of available players is a bad start. What would improve the gameplay experience tenfold would be to offer a single-player function too. As a trivia aficionado, I would relish the chance to dip into a few minutes of Q&A when I get a spare moment. Waiting 72+ hours to get a second round with my opponents was not conducive to producing a positive play experience, and that was the sole instance that I was responded to.

Complaints about player agency aside, the trivia questions are exactly what one might expect. I encountered a mix of US-focused history, geography, and popular culture. Of ten or so rounds that I attempted, I encountered one or two repeats, which isn't bad at all in a free app. A second quirk was when I encountered two video game-themed questions that complemented each other in such a way that the wording of the first provided the answer to the second. Again, bearing in mind that this app is free, this is acceptable, but still a disappointment when it happened.

The app seeks to purloin funds through its Common Cents system. Simply put, it costs you cents to play games. These generate after fixed periods of time. While I had no problems with running out of cents, this could get frustrating if you have a number of trivia buddies with whom you are playing the game. Similarly to Draw Something, you can also spend your credits on three power-ups.

With enough of a userbase to support it and a healthy supply of questions waiting in the wings, Trivi.al could be a knockout game for those who get their kicks from knowing the most westerly city in the USA. As it stands, the lack of players is what most makes the title difficult to recommend. Unless you know enough people to get a decent flow going, you won't look at it more than once or twice. On that closing note, if you do, let me know, because I will take you down. Rating: 6.0 out of 10.

Disclosures: This game was obtained via download and reviewed on the iPhone. Approximately 3 hours of play were devoted to it. There is no single-player mode.

Deaf & Hard of Hearing: The use of sound in this game is incidental. Play is just as rewarding for both hearing and hearing-impaired players.

Hey thanks for the review man. We love the good with the bad helps us to get batter. Anyways we updated the app last week and fixed the random problem you and many others we’re having along with a ton of new features to make it better. We would love it if you would check it out and maybe even re-review the app. There are over 10s of thousands of users now playing and we think you’ll enjoy the game. Here is a promo code for the PAID version for you to check out as well: EX94R6M9N3TT Here is a… Read more »

Thanks for the write up. The newest version has a brand new random engine so that it will only play other players that are looking for games. It also has a ton of fixes.

We appreciate the coverage.