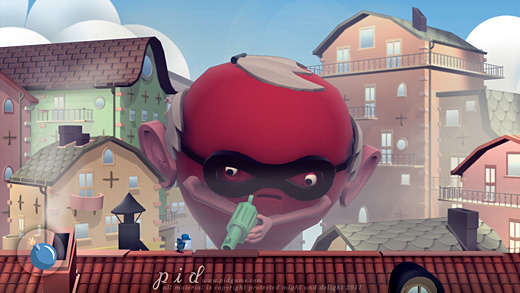 WTF Why is that giant waiter so angry at me?

Pid, pid, pid, pid, pid. I want to like Pid so much, I really do. When I previewed this game before release, it struck me as a wonderfully cute platform puzzler that was perhaps a little rough around the edges. I had the impression that by the time the game was released, certain imbalances and obviously frustrating aspects would be resolved, and I would be able to tell the world about the wonderful universe that protagonist Karl finds himself in, and how Pid would draw players in with its universe, tantalizing them with its novel gameplay.

First off, allow me to clear the air: I love sinking my teeth into a properly difficult game. In a climate of mollycoddling the player with tutorials and overly simple challenges, it is always a refreshing sight when a game comes along that holds its players to a higher standard and refuses to forgive poor performance. What makes games like this so enjoyable is the calculation—the attention demanded from the player is reflected clearly in the game’s precision, which asks that they remain vigilant and rehearse effectively in order to succeed.

Conversely, no matter how much rehearsal, nor how much attention is paid to it, Pid consistently remains a frustrating experience that plays to the detriment of itself. This is a game that starts out full of fun and whimsy, and quickly degenerates into one of annoyance and distaste.

Players must take Karl, newly arrived on a strange planet after falling asleep on a bus, and help him find his way home. Before too long, Pid's defining mechanic arrives: gems that enable Karl to create, and propel himself in, light beams. Thus ensues much exploration and using the gems to damage enemies who block his progress. This standard gameplay level-to-level is challenging enough, but I’ll wager that it will be during one of the game’s boss fights that those oh-so-patient people finally set down the controller, never to play again.

The main problem is that the game’s controls are too floaty for their own good, which makes them frustrating and unreliable in a one-hit-kill ruleset. This lack of control fidelity is what separates Pid from luminaries of the genre such as Super Meat Boy, or Fez. Unreliable controls and frustrating gameplay do not a winning combination make. This is then further exacerbated by levels that have a tendency to drag on just a little longer than one might otherwise like. In a light-hearted platformer, getting bored is a terrible thing to happen.

Despite these problems, the game looks and sounds great. The world of Pid is cute, yet mysterious. It is genuinely enchanting, and discovering more about it is likely to be the sole factor that urges more patient folk through its faulted gameplay. Beyond this cute exterior, however, there lies a dark and unsettling atmosphere. The characters that inhabit this world are mysteriously apathetic, save for the few that encourage Karl to escape. Of course, by the end of my time with Pid, I felt as if I could fit right in amongst them. Perhaps they had met their fair share of those frustrating end-of-level bosses, too.

Pid has so much going for it, save for the actual act of playing it. A quick run-through of the trial version will provide a succinct taste of the fun and whimsy of the environments. Might and Delight would have greatly benefited from better channeling that same sense of fun and whimsy into the game’s playstyle, too. As it stands, Pid is a misguided platformer that is set to quickly disappear from memory. Rating: 5.0 out of 10.


Disclosures: This game was obtained via publisher and reviewed on the Xbox 360. Approximately 15 hours of play was devoted to single-player mode, and the game was not completed. There are no multiplayer modes.

Parents: According to the ESRB, this game contains cartoon violence. The unforgiving difficulty of this game will likely try the patience of younger players. The story’s cheerful appearance belies its dark tone.

Deaf & Hard of Hearing: There are a few moments, such a particular boss fight where gunshots are heard off-screen. It’s perhaps not insurmountable, but could offer an undesirable extra challenge to an already difficult gaming experience.

I finished game as single player, and played co-op for an hour with my girlfriend. I liked co-op, but it has flaws.

When playing on co-op, players have only one gem and you have to use them properly, in order to achieve success. It made the game harder than ever, almost barely playable.. dying all.the.time.

Thanks for pointing that out! It was nothing more than a simple editing error. Thankfully, the protagonist’s name doesn’t affect the game in any way whatsoever. I appreciate your keen eye.

I would have *loved* to have tried the co-op, but unfortunately I had nobody else to play it with. I am sorry about that.

Did you enjoy the co-op?

thanks for bringing that up, but just to clarify, when this review was written by the author, those things didn’t exist (and they still don’t exist on XB360, last I checked.)

It’s a real challenge to draft a comprehensive review these days, since developers are now more in the habit of patching things and adding things after release than they used to be. We do the best we can to stay on top of it, but keeping up with every update that gets put out is a tall order.

Just wanted to mention this as it is not mentioned! PC-version was also updated last week with a Easy Mode!