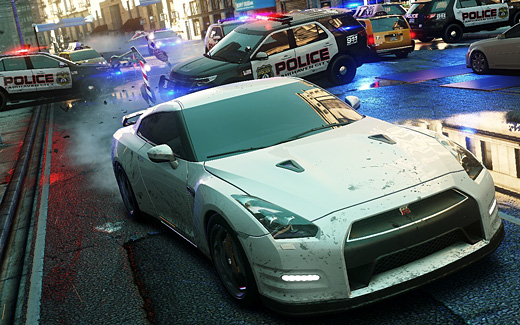 HIGH Blistering down a sunset highway at almost 200mph.

LOW Hurtling straight into a divider at almost 200mph.

WTF Where is the start menu?!

As someone raised firmly in the simulation racing stable, I was a touch dubious about Need for Speed: Most Wanted

—arcade racers have always felt far too forgiving and chaotic to hold my interest. Criterion's latest effort seems to occupy a middle ground between both ends of the spectrum.

Racing through Most Wanted's city of Fairhaven is a joyous experience. Keen travelers will recognize familiar landmarks that bear more than a passing resemblance to locations in London, Paris, New York, and Boston, to name just a few. There is much to do and much to see, and so many billboards to hurtle through at high speeds.

All that hurtling will require cars, and the game boasts a vast range of vehicles. The sole caveat is that players must find them hidden throughout Fairhaven's environs. Once discovered, vehicles can be driven immediately, or chosen later at leisure. With the structure of play, it's unlikely that most people will drive everything they find since the campaign steers the player towards devoting time towards upgrading whichever cars suit their preference.

The competitive circuit and point-to-point races are traditional arcade rubber-banding with a slight simulation twist. It's definitely not a game that overlooks reckless driving, as most standard arcade racers will, and there's a focus on using good racing lines and cornering.

The game is totally unforgiving when it comes to its traffic system, though—expect to crash into a lot of NPC cars. For example, oncoming traffic will often turn in towards the player's car. This random implementation of traffic is totally counter to the game's semi-simulation focus, and why anybody would steer towards someone driving head-on at breakneck speeds is beyond me, but it's abundant in Most Wanted. This crashing, alongside the demanding cornering, will try even the hardiest level of patience.

Most Wanted's multiplayer takes an interesting twist from the standard point-to-point or circuit races, offering extra challenges such as "Who can drift the furthest?," or "As a group, collectively jump 1200 yards." These are interspersed with more traditional races and time trials, and are a refreshing way to play with the vast array of vehicles in an open-world game. 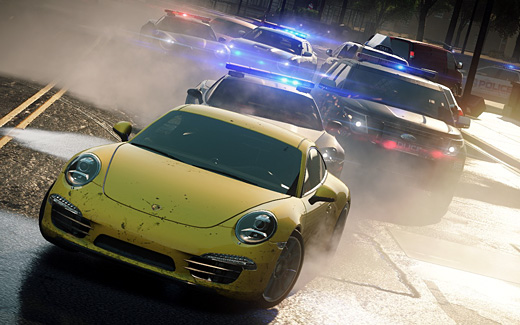 Sometimes, however, the challenges can seem obtuse, ranging right up to nigh-on impossible. For example, when playing online as a team we were tasked to jump from one Fairhaven monument to another, and it was no mean feat. The level of challenge combined with a lack of coaching resulted in a long session of eight people driving aimlessly, waiting for the tournament round to finish.

This anecdote is evidentiary of the game's core issue: it doesn't seem able to choose between being an arcade racer, or a driving sim.The multiplayer confusion represents one facet of this, but these issues persist elsewhere, too.

The worst aspects of Most Wanted are the terrible navigation and waypointing systems—the game is crying out for some kind of GPS voiceover because at the speeds the vehicles reach, there's no time to look at the corner map for where to turn. Consequently, doing so often results in crashing, missing checkpoints, or otherwise invalidating the race and necessitating a restart. Of course, when playing online that option is gone. It's a matter of making one tiny mistake, and winning becomes a far-off dream.

Navigation problems extend beyond the driving. The lack of a manual or useful tutorial leaves it up to players to learn the game on their own, which is easier said than done in an open world driving game. Additionally, the pause menu is sluggish and slow to respond—a problem seen in previous Criterion racing games—and makes using it a trying experience.

As something of a replacement, Criterion offers a new in-game menu system, called EasyDrive, which is designed for use with the d-pad whilst playing. If my earlier comments concerning the difficulty of map consultation while driving are still fresh, similar difficulties apply to navigating a menu whilst driving. In an effort to counter this, Kinect functionality allows the EasyDrive menu to be navigated through voice commands, but with no game feedback, it's never clear if the highlighted option is where it needs to be without checking it. The important problem is looking at the menu, rather than using the controller to navigate it. In this sense, it has failed.

Need for Speed: Most Wanted

is caught between two worlds. The game can't quite decide if it wants to be an arcade or a simulation racing game, and it takes a lot to get used to this in-between zone it occupies. That said, once the adjustment period is over, there is a lot of enjoyment to be had when it's not being frustrating. For players that find Forza too fussy and Burnout too casual, Most Wanted might be be the racing game of the holidays. Rating: 6.0 out of 10.


Disclosure: This game was obtained via the publisher and reviewed on the Xbox 360. Approximately 25 hours of play were devoted to the game. In single-player mode, the game's primary campaign was completed. The multiplayer mode was played, with approximately five hours dedicated to it.

Parents: According to the ESRB, this game contains alcohol references, comic mischief, and violence. The car crashes are shown in explicit detail, and while there is no blood or gore, there is a clear and present sense of risk and damage which may be disturbing to children. A core theme of the game is defying the law, and directly challenging and behaving aggressively towards law enforcement. This may be a concern for some parents.

Deaf & Hard of Hearing: The most important sound cues are hearing approaching police sirens, and the gear shifts in cars. If you find driving games to be unfettered by a hearing impairment, there is nothing of particular note in this title. All menus and game instructions are textual.

I appreciate the time you put into this response, as it really makes clear what you considered to be the prevalent simulation aspect. I’m not sure what your experience has been with other Need for Speed games, but the ones I played (namely Hot Pursuit 2 on the PS2, Hot Pursuit and Shift on PS3) have had this traffic mechanic in the game. Perhaps it’s the inclusion of too much traffic that made this game confused about its own nature, as I can definitely see a rise in the number of obstacles in general. I myself have also been frustrated… Read more »

Hey there Blacksea, That’s interesting about having not experienced the same traffic-driving-into-you as I did whilst playing. It’s not uncommon for there to be subtle differences across ports of games, whether in play styles or graphical appearances. In your own description of the traffic as being logically there to slow players down/offer obstacles, and then your follow-up on the game as “The entire thrill is on the racing and ability to have no pressure while having a joyride in a city at breakneck speeds” is more or less what I mean when I describe the game as being unsure whether… Read more »

Interesting take on the game, as I find it to be rather different than my experience. I played on PS3, and found that cars never went straight for me or actively turned towards me; all that they’ve focused on is staying straight in my playthrough. My crashing into them was always entirely my fault. When you stated that the game is unforgiving in regards to the traffic system, it seemed like you were referring mainly to this issue, but what exactly were you expecting? If you are in an open world environment, you can’t expect there to be no traffic,… Read more »