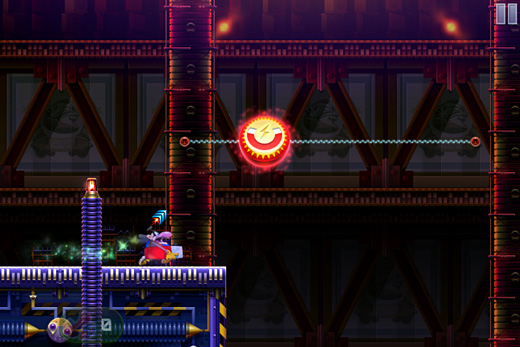 Pagoda West are a small independent studio who rose from the ashes of now defunct fan-game Sonic 2 HD. If that wasn't strange enough, they've just released their first game—poles of attraction platformer Major Magnet. I spent some time talking to two thirds of the team, Jared Kasl and Tom Fry, to hear about the process of making a first game, how magnets work, and why The Ren & Stimpy Show is such an influence. Read on to find out more!

Jared: Hi, I'm Jared Kasl, and I'm from Portland, Oregon. I'm the game design director for Major Magnet. I do any design-related stuff to do with physics, level-design, etc.

Tom: Hello, I'm Tom Fry, and I'm from London, England. I'm the art director, which makes me responsible for everything you see in terms of how the game looks. Animation, marketing, level tiles, HUD—you name it, I've done it visually.

How did the two of you wind up together?

Jared: We found each other through a fan-game, Sonic 2 HD, which was an HD remake of Sonic 2. We joined that project independently, and hit it off right away. We worked for around a year and half on that project, but it didn't pan out the way we'd hoped. We figured we'd take the skills we'd learned from it, and use them on something that we'd have better control over, and that could possibly go somewhere. Pagoda West was born from that point!

Why the name "Pagoda West?"

Tom: When you think of company names that really stick with you: Nintendo, Sega, companies like that, they are their own words. If they were in the dictionary, they'd simply point to that company. Although the words "pagoda" and "west" are their own words, we stuck them together—welded them together. "Pagoda" we chose because it sounded nice. It's easy to say, you can read it easily, and then, well we're both based in the West. So, "Pagoda West." It rolls off the tongue nicely. Something that sounds pleasurable to the ear. It's all about the sound.

Not to forget that if you wind up expanding, you're also left with a host of other compass points…

Tom: Exactly! That will be the natural course of action to take. [Laughs] 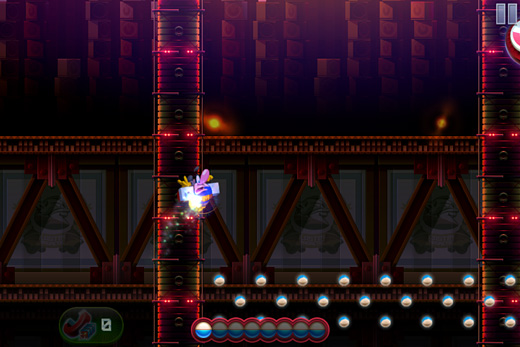 How did you both get into game design, and when?

Tom: Sonic 2 HD was something of a gateway project. Both of us have been passionate gamers all through our lives, since as long as we can remember. Prior to Sonic 2 HD, I was working as an animator in London in different studios, and working freelance as an animator and illustrator. I always had the dream of doing something with games one day, of going to a triple-A studio—that kind of pipe dream. When Sonic 2 HD started, even though it was a fun side-project, it gave both of us this realization of "Actually, we could really make a go of this." It got to the stage where, as fun as Sonic 2 HD was, it would be nice to exercise our creative muscles and explore something new. By the time S2HD had run its course, the timing was perfect for us to go and start Pagoda West.

Jared: I have programming and art experience, and I always knew I wanted to run a company, but I didn't know what it would be. After we had our run with S2HD, I discovered a passion that I could really get into. It used all of my skills and it felt like a real coming-together for everything. Game design had always been a distant thought in my mind, but I never thought that it would actually come true this quickly. It's come about through chance, but it's been great.

Tom: We talk about this so often. If our lives had not crossed, then we would be doing very, very different things right now. It was sheer fluke that I even found S2HD in the first place—I found a random image from the project whilst searching on Google Image for something completely unrelated.

Right, so you both worked on this Sonic 2 HD remake for a significant amount of time. What went wrong?

Jared: Tom joined a little earlier than I did. It all started as a community project on a site called Sonic Retro. Anybody can submit anything to the project, but they started forming a core team of developers. They chose anyone who was slightly better than the standard level of ability. Then Tom and I joined and we had a totally different vision for the project, and figured that if it kept going as it was, it would never come to anything. So we took charge of the project, cleaned house of the staff, and did all of the art ourselves. The big problem came with our programmer, who had his own vision for what he wanted to be in the game, and what he thought it should be. He would do things like make sure people were unable to take screenshots of the game—something none of us had talked about, and in fact absolutely didn't want to block players from doing—and he basically held the game hostage. We finally released what we had achieved, and decided that it was time to move on to something we could have more control over. That's when Major Magnet was born. 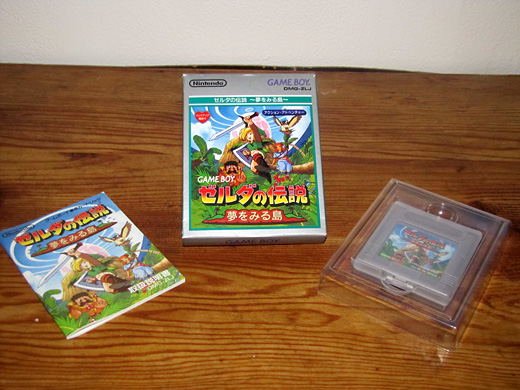 What inspired that move to a new IP?

Tom: At its most basic, it was that shared desire to make something original. Based off what Sonic meant to us both when we were young, we wanted to try and formulate an IP that could really resonate with a broad audience in the contemporary space. Sonic was very appealing to a wide audience in its day—and still is now—and we wanted to do the same. On top of that, you can't have a character that just looks appealing. The most important thing is that it's a game that's really fun to play and that captures the player's imagination.

We looked at the proliferation of touchscreen devices out there and harnessing that to create an experience unique to that platform, and that would make the device core to the game's design. We knew we wanted to do something 2D and side-scrolling. We initially thought it would be more of a slower-paced puzzler. We thought that a fully-fledged action platformer, like Major Magnet now, wasn't really possible. We thought that would be too much, given the various inherent limitations of the device. We kicked around ideas of ways that you could control a game without using virtual controls, or anything like cutting ropes, throwing birds out of slingshots, etc.

The last criteria was that it had to be something that players were intrinsically familiar with. Although some cannot conceptualize exactly how they work, most people get how magnets work—that opposites attract, and so forth. Once we settled on the magnet idea, that's when we drafted a whole dossier of ideas, and that formulated the base for how the game was going to work.

Why did you choose to release on iOS?

Jared: We actually started on Android, and went looking for an Android developer. During our search, we found a software development kit (SDK) called Corona, which can output to iOS and Android, and then the more we worked, the more we realized that the best way to get our game to the most people would be to focus on iOS. We still have plans to release for Android in the future, but right now our focus is shifted towards iOS.

Are you planning to keep it touchscreen-focused?

Jared: Right now, we don't have any plans for a PC release, but it's not out of the realms of possibility.

Where does the art style come from? The major himself looks almost Ren & Stimpy-esque.

Tom: It comes from a number of places. When I was younger, I was an avid viewer of Nickelodeon shows, particularly The Ren & Stimpy Show. John K. is the man responsible for that show's distinctive style, and is someone who I look up to in terms of various techniques he uses, right down to how he draws a line. I was trained as a 2D animator, and he is a great point of reference for rock-solid animation staples. 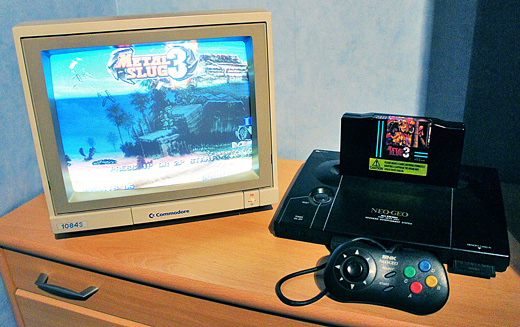 In addition to that, there are a number of game influences. To Jared, I'm a broken record, but my #1 inspiration is Metal Slug. As far as I'm concerned, it's a visual tour de force. It's a masterpiece that drew power from the Neo Geo that nobody knew was there. Everything is so smooth, it's like an interactive cartoon. There is so much detail. Even to this day, when I sit down and play it, there are still visual surprises still to be discovered.

What's next for the game? How close are you to release?

Jared: The official release date is February 14th. We still have some cutscenes to add, a few more finishing touches. The gameplay is totally complete at this point, though. We also have big plans for keeping the game updated… We don't want to say too much about it just yet.

Tom: We certainly have some plans internally that we're dying to release. If the game really catches on, players will love what we've got coming. Big surprises, let's just say! There is another IP that we're looking into, but we have nothing to announce on that yet. We're building solid bases, and we're very excited for it, too.

Sounds like you have plenty going on in the coming months! Last question, what's your most prized geek possession?

Jared: I have two collections that I really prize. I have a huge Sonic merchandise collection. I have a collection of Link's Awakening cartridges, Japanese and American boxed versions. My US boxed version of that is likely my biggest gaming possession. I love it. It's one of the best games ever made.

Tom: Not surprising after my rant, but I have a NeoGeo collection which includes Metal Slug 1, 2 and 3. Probably Metal Slug 3 is my most prized, as that game is so disgustingly expensive now. I got it for a bargain-basement price, and I'm so pleased to have it. My other most-prized is something I got in 2011. Sega re-released Sonic CD, and they ran a competition to draw a scene from the game. I entered and won one of the grand prizes! The prize was a CD soundtrack signed by the game's composer, art director, and a few others who I can't recall right now. If I was to go back in time and explain to my five-year-old self what that was, I think I probably would have melted.

Major Magnet released on the iOS App Store on February 14th. You can learn more about the team at www.pagodawestgames.com