You might not have heard of a new game outfit called Modern Dream yet, but you will.

I spent a short while chatting with Oliver Clarke, one of the members of Modern Dream, and this is what he had to say about buttons, affairs, and what it's like to start making your own games. 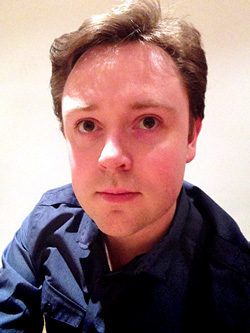 Hi Ollie, tell us a bit about yourself!

I'm a guy crazy about games and crazy enough to try and make games with my friends—I've started a game-making movement called Modern Dream. We're at the bottom of a mountain, and we want to climb it all the way to the top where hopefully we're making a new style of games that people love, feel richer for having played, and keep coming back to play more of.

What got you started making games?

I got into games from the age of four. My dad brought home a Commodore Vic20. I could feel his excitement and my curiosity led me to a lifelong passion of playing video games. This in turn led to a need to make them. I've been lucky enough to work in the industry for over ten years, during which time I've been learning all I can.

Seeing so many cool games being made by people really inspired me to try it out for myself. It was a scary decision to go for it but I haven't regretted it so far.

Your latest game is The Button Affair. Give us your elevator pitch.

The Button Affair is the story of Enzo Gabriel. His quest? To steal the priceless Button Jewel from the infinitely wealthy business tycoon, Victor Meirelles.

Its a 1960s vector-inspired stylish game with a comic book-lite story with really over-the-top death effects and a challenging difficulty curve. The Button Affair is designed to give game lovers with busy lives 15 minutes of quality entertainment that they can enjoy, and then move on just a little richer for it.

It can be downloaded from here for free. We only ask, if you love it, to consider making a small donation to Special Effect, a British charity helping disabled gamers. It's a cause we believe in and are making a massive difference to the quality of life for disabled gamers.

So you've just mentioned Special Effect. How did you discover their work?

I read somewhere about the case of a man who was physically "locked in," and his ability to interact with the world was severely impaired. He repeatedly communicated that he wanted to die and was fighting in court to have that right. I felt it was terribly sad to see someone in such pain, especially when we're on the verge of technologies that could seriously increase the quality life of those who are severely disabled.

During Eurogamer 2012 in London we met the guys from Special Effect, who were also at the show. They were demonstrating how they modified games technology so that people could play games if they were disabled in some way. The work they do leads to a massive increase in the quality of life for people all around the UK.

After speaking with them, I could tell they were totally passionate and very kind people. I wanted to see if we could help. Over the last year it's been great to see Special Effect go from strength to strength, and I feel that within our lifetime it's possible that no one will have to suffer the inability to express themselves, or to be unable to take part in life. But we have to keep supporting these guys!

It's a worthy cause, for sure. So, back to The Button Affair. What inspired you to make a runner-style game?

I wanted to make a game that was really accessible; something that people could pick up, play and enjoy with minimal faff and fuss, especially as it was going to be a short 15-minute game. Tutorials are the enemy and must be defeated!

Canabalt was obviously an inspiration. When I played that game I realized that a game doesn't need to be complicated. In fact, games can be far more compelling by not being complicated. Not everyone wants to spend their time learning complex button combinations.

I had a few other reasons in addition, but here are the two main ones:

1) I really like runners but I hate that they don't end. I like resolutions, I like finding answers and new questions. The idea that things don't end is actually terrifying to me. So I needed to make a running game with a "purpose."

2) I wanted to focus on actually getting a game made and solving the problems that come with it. I deliberately avoided being clever with a game design and took one "off the shelf" as it were, trying to execute it really well. It is damned hard work finishing a game. It really is. I take my hat off to anyone that manages it.

In getting The Button Affair out, we feel we've reached an important stage in climbing the mountain. It's a big undertaking. We want to do it and to do it right, and that means having the patience to do lots and lots of things in the right way over a long period of time. We're in it for the long haul.

I saw great influence in the art direction. Is it closer to FX's Archer? Or classic 1960s British spy adventures?

My big passion is color. I frickin' love it. When handled right, it can really punch your eyeballs out, and there were lots of inspirations, ranging from TV shows to art movements to games from the 80s and 90s. The pop art movement in the 50s and 60s was a big inspiration, as well as vintage travel posters like the Monaco racing images.

I did watch a lot of 60s spy movies and TV shows like The Man From Uncle. Those were definitely in my mind. One of the most obvious influences is the title sequence for AMC's Mad Men. Its style is just so cool and refreshing, especially after we've seen so many grey and brown games on consoles in recent years. I saw Mad Men and felt like I really wanted to play a game that looked like that.

In terms of games, Another World is a classic title that lots of game makers refer to as inspiring. I'm no different. I keep an original copy of that game hidden in my safe box.

(Okay, that's sad but i really love that game!)

Interstate was another classic influence which showed how a vector style could work in 3D. I just had to try and get it to work, and The Button Affair was the result!

It's fairly uncommon to play as the "bad guy." Was that a conscious design decision?

Yeah it was. I think good people can do bad things and bad people can do good things. In The Button Affair I wanted to explore that theme, and it was always intended to be the first of three parts.

In the first part the player is the villain and the wealthy tycoon Victor is really just protecting what rightfully belongs to him. In the second part I wanted to twist it so that Victor rages after being wronged by the player character, Enzo. And in the final part, I wanted to reverse it to show that there is both good and bad in people. To demonstrate that we have a choice in how we behave.

Whether parts 2 and 3 will ever get made… I don't know. But if we did get round to making them, we would explore different types of gameplay, like point and click, so that people can explore the world more. 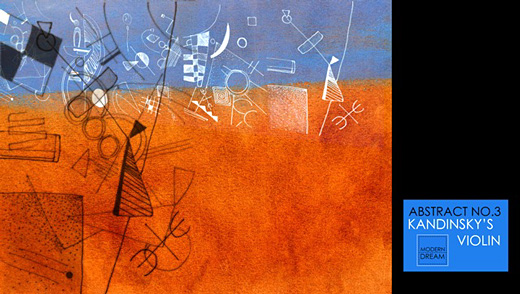 What's up next for you and the team?

Well, we've just created the name for our group—Modern Dream. It's a take on The American Dream. I love that positive message that you can achieve your dreams if you work for them. I feel lucky to be able to realize my dreams, and ours is to make great games sustainably in the right way that players come to love. It's a Modern Dream.

Our first game under this label is called Abstract No3—Kandinsky's Violin. It's a re-visit of our first game called The Cat That Got The Milk. We still get lots of great feedback from players about it, and with this game we want to get a project to market that gives players more of what they loved in the first one. If we can get it right, well, we've got some very cool plans in place to reach up to the next level of game making.

If people want to catch up with how it's going they can check out the development blog.

We've been going back to raw art basics and are actually making concepts and art assets through traditional art media using similar methods Wassily Kandinsky used at the Bauhaus. Its been an enlightening journey so far. We want to share the development process with everyone through the blog.

It looks really interesting, Ollie. Thanks for stopping by!

The Button Affair is available now for free.