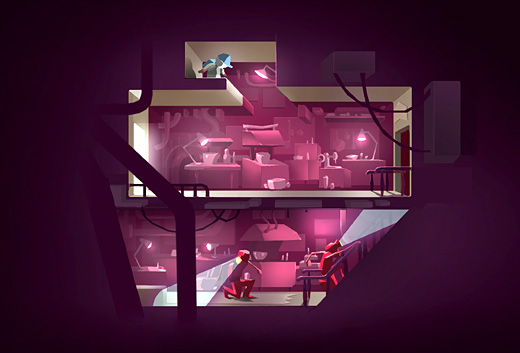 Before reviewing the new puzzle-platformer Pid, I had an opportunity to talk with Jakob Tuchten, Might and Delight's art director. If you're curious about hearing more on the next game from the studio that released the excellent Bionic Commando: Rearmed, this is the place to be.

[This interview was done while Pid was still in development.]

Why did you choose the name?

We always wanted a name that resonated well with the undefined and strange tone of the game world. Peculiar Destination and Planet in Distress were two names that we talked about during production. Pid was sort of the short-form name that we used daily. When the time came to decide upon a title, we felt we couldn't desert it. The game had become Pid for us, and so we decided to let it be that to everyone else as well.

The papercraft look of the game is so subtle as to be barely-there. What was the inspiration behind it?

Simplicity is one of the founding pillars of the visual style in Pid. We played a lot with the idea that the characters and objects of the world could all be translated to wooden toys. We also studied the basic construction style of doll house props, and liked the fact that material definition is rare—it's more in the colors and design that the objects come to life.

There's definitely a sense of imagination at play. Even the music has this sort of dreamy, loose almost muzak guitar style. What led the decision for such a somnambulant backdrop?

The sleepy undertone is a theme we work in with all the games' different components; we had a strong ambition to bring forth traditional crafts in the project. The visual style depends more on classical art values than technical marvels—same goes for the music. We wanted to work with traditionally schooled musicians who would bring a creative and organic sound. And we got more than we bargained for. Retro Family created the score for the game and they didn't just interpret the mood of the game: they helped define its core.

Was there a conscious decision to opt for Banjo-Kazooie style sound-effect voices, rather than full voice acting?

I can't claim that those were ever our options. We had zero budget for anything like that and had to come up with other, more creative solutions. Since we didn't have any facial animations, we needed something to help communicate emotions with the player. Text can be interpreted in so many different ways, and it is hard to create a menacing or ironic tone using only written word. The gibberish voice language helps us to give that emotional sense of direction that we want the player to experience. 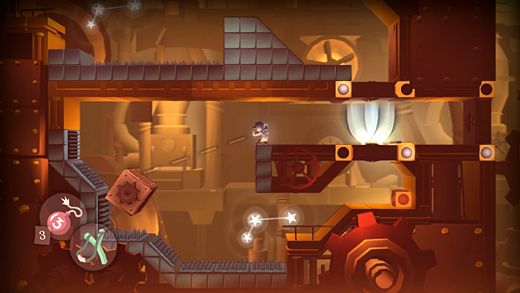 Pid is full of slogan posters, such as "Enjoy Your Night With the Finest Chef" on the Planet. Is there something deeper going on here?

Both yes and no! I assure you that they all have a planned purpose. But that purpose is often to give a flavor to the scene or a small taste of the culture on the planet. Some are designed simply to be amusing or visually attractive, others to be thought worthy concepts or ideas that has a relevance even outside the game world. In the example you mention, we wanted to strengthen the portrait of the butler and his status on the planet—to make his fall from glory even more brutal.

A number of your team previously worked on Bionic Commando: Rearmed, and the two share a theme of free exploration and movement. Is this a significant theme for your work?

Great question! In the early stages of Pid we decided to use that part of Rearmed as a sort of recipe. The balance between a platforming foundation that everyone knows by heart and a mechanic that brings complexity is something we worked hard to create. Rearmed was a great mix of the two factors and I can only hope people will feel the same about Pid. That being said, it not necessarily a theme in the future projects from Might and Delight.

Beneath the light-hearted, child-like look and feel of it all, the game's characters and levels are imposing, leaving players with a constant sense of menace. Why is this?

That's a great way to define it. Well, to describe our method in short, we started by defining how we wanted the game to "feel." It was agreed that the game should have a playful and creative sensation, but with a tone of relevance or depth. Moving forward, we decided that the game mechanics and the visuals should relate to the cheerful imaginative emotes, and that the story should be a counterpoint to that—bringing a sense of sadness and sincerity to the mix.

Personally, I always saw Charlie Chaplin and Disney as a sort of compass for that balance. They managed to be both silly and serious simultaneously. I can only pray we come anywhere near that.

Levels such as the dining hall really play with perspective, giving us the impression that the protagonist, Kurt, is infinitesimally small. Did you want the game to recall the memory of being a little kid in a big world?

Yes, most definitely! Scale is something we use constantly to underline Kurt's role and to cement the fact that he doesn't belong there. Age is another such factor. You will encounter very few child characters in the game, but the ones you meet are resourceful survivors whereas the adults sees themselves more as victims. That is important with Kurt. He is also one of the few conventional personas in the story. He often says the expected and reacts to the bizarre happenings in a manner that is close to how players would react.

Fascinating. Thank you for your time!

You're welcome. Thank you!

Pid is still in development. You can find out more information on the official website and listen to the The Retro Family, who scored the game.