What do all of these big-name games have in common? They were all worked on by a studio you might not recognize—Demiurge. After helping the big boys with these heavy-hitting titles, they've 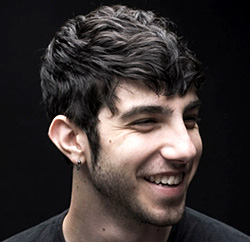 stepped out of the shadows with Shoot Many Robots, their own original IP.

Freelancer Christopher Floyd had a chance to speak with Associate Producer Justin Lokey on behalf of Gamecritics.com about the studio, its future, and interestingly… the fact that they are hiring!

Where did the name Demiurge come from?

In the studio's inception more than 10 years ago, the founders spent a late night with a thesaurus, searching for synonyms to "creativity" and "innovation." Eventually, they came across "demiurge"—the entity in Plato's writings that created the material world. We create worlds in our games, so the name was a perfect fit (though, admittedly difficult to pronounce).

How was the shift from developing for other companies to developing Shoot Many Robots solely on your own?

We have learned a lot over the years developing games in many different genres and platforms—experience that was invaluable when we started our solo venture into game development. The biggest change for us was probably that we no longer had outside entities driving the vision of the game—it was all ours. When Ubisoft picked up the game to publish it, they had tons of great feedback and design input, but for the most part, we were the sole arbiters of quality. We suddenly had tons of power, a prospect that was both terrifying and exciting. 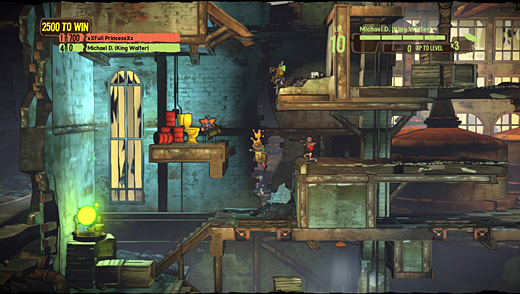 What sort of mercenary work are you currently doing for the Wii U version of the perpetually delayed Aliens: Colonial Marines?

The Wii U GamePad gives us an opportunity to create an experience that can't be found on the other platforms, and we're taking full advantage of it. The motion tracker is a great example of something in the Aliens universe that we're able to put on the screen in your hands, such as how it would appear to a marine. In multiplayer, it's useful to have things like the scoreboard and map in your hand, so you don't have to obscure the TV screen to get information at a glance.

Has your team been touched by the manifold problems that have plagued the game since its announcement in 2001?

We haven't been affected negatively by Gearbox's development of the game. We were brought on a few years ago to do some work for the game, and when the work was complete, we moved onto other projects. We were brought back on the project this year, with tons of progress made since we last saw it. The game's come a long way, and as fans of both the Aliens universe and Gearbox's games, we're certainly excited to finally see the finished game.

You've announced the bold move of an open call for new talent. What's inspired such a broad move?

We're always hiring, but with the success of Shoot Many Robots, we're looking to grow our family so we can take on more original games.

What are you looking for in potential applicants? If I really love playing games, is that enough to put my name in the hat?

Loving games is definitely a requirement, but while we encourage concise resumes, your application should probably have more than "I Love Games" below your name. We carefully evaluate new hire candidates, and often ask "Does this person do one thing better than anyone else here?" We're a small, indie studio, so in addition to being awesome at one thing, we look for people with a broad and versatile set of skills. Having multi-talented peers has helped us be able to jump from making iPhone word games to music games to shooters, and back again.

How many new recruits are you planning to take on?

We don't have a quota to fill—we're just looking for talented individuals with a passion for video games.

Are staff 100 percent focusing on development for Shoot Many Robots: Arena Kings right now, or are there other projects in the pipeline? Will the situation be similar for new hires?

We have a handful of projects in the pipeline right now, but the only announced ones are Arena Kings and Aliens. New and existing Demiurge staff are put on projects where we know they'll thrive. We've got some new games in the works that are part of our pursuit of creating more original titles, so there are lots of opportunities here. 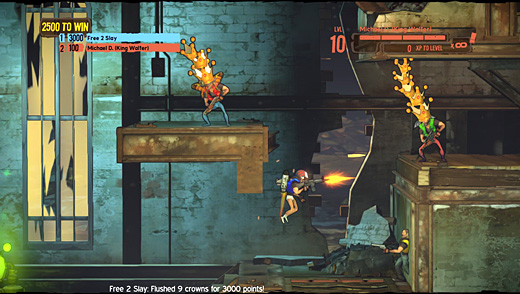 How's developing coming along for it?

Development has been really fun—this time, we're focusing on community involvement to drive the vision of the game. We're releasing weekly updates based on feedback we get directly from players. This is completely new territory for us, since we're not used to releasing our weekly progress to the public. Working on other developers' titles, they see our progress weekly, but they're not expecting a finished product. Gamers have limited time to invest in their games, so we have to make sure each update is worth their while, and is of a certain quality. It was scary releasing something we knew wasn't finished, but the positive feedback we've been getting has been extremely reassuring.

Tell us a bit about what separates this from Shoot Many Robots.

For starters, you're shooting other players instead of robots. Shoot Many Robots was a cooperative game, and we wanted to make a PvP experience in the same universe. It's still a side-scrolling shooter, but we've built upon the existing gameplay to bring something unique to Arena Kings. In the first mode we've released, Royal Flush, you must kill the other Kings and collect their fallen crowns. To score points, you have to flush the crowns down a teleporting golden toilet, with more points awarded for a larger stack of crowns. We also have a new way to upgrade weapons by completing challenges for each weapon. We have a ton of ideas for new things to add to the game, and with influence from the community of players, the future of Arena Kings is an open book.

What inspired the move to free-to-play for this PvP follow-up?

Making a game free-to-play is an easy way to get your game into more gamers' hands. People are hesitant to throw down a lot of money for a game they're unfamiliar with, so by making the game free, you're removing the first huge boundary between you and the consumer. And it goes without saying, the more people playing our game, the better.

Are there any plans for an open beta?

Yep! We'll eventually open the game up so you don't have to be invited into the beta. The game is still early in development, and we've got a lot of stuff we want to add before making it available to everyone. Making a good first impression on gamers is vital to the game's success, so we want to make sure it's ready for prime-time. Until then, we're getting great feedback from the players in the closed beta. In the mean time, you can sign up to be put on the list for a beta key.

Finally, if you could shoot any robot in science-fiction, which robot would you shoot?

Definitely Mikaela Banes. The Decepticons had nothing on her.