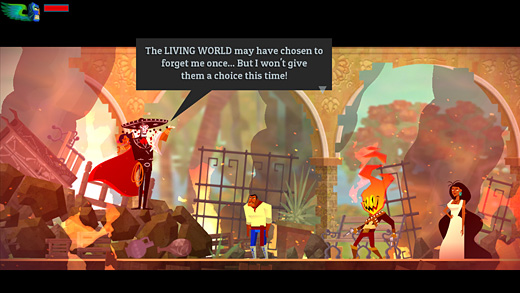 "At a high level, Guacamelee is a platform brawler that's in a Metroidvania world. Oh, and also, it's Mexican themed. It's based in an imaginary land within Mexico. We borrow a lot of style, culture, and folklore references that we've put into the game. Have you played before? There's co-op…"

McQuinn's description underserves the game's singular appeal. Suffused with south-of-the-border style, Guacamelee's points of reference come thick and fast. Brad Gallaway reviewed the full game and scored it a sterling 9.0 out of 10, but just how exactly did the Canada-based studio find themselves making it?

"We knew we wanted to do a platform brawler, and we have a very horizontal design process at the studio. So internally, we threw a lot of ideas around, and then our animator, who is from Mexico, said "Hey, why don't we do luchadores in Mexico?" We weren't immediately taken by the idea, and then the more we looked into it, the more awesome we realized it was. There's so much material, so much style—it was wicked."

It is a gamble that has paid huge dividends, leading Chris and the team to a visually striking final product with no substitutes. 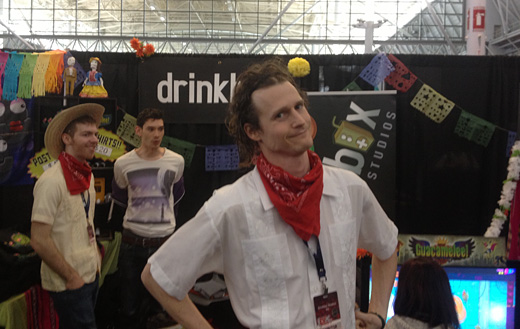 "So that was the genesis of the style, and it's really worked out. We tried to incorporate as much of the material as we could. For example, you see that we can't get into this temple, but if you jump up and hit the portal, we transport to the world of the dead. This is a very important aspect of Mexican culture. They don't treat it as a spooky place necessarily, the way that those of an Anglo-Saxon background do. For us it worked really well, because we wanted to implement a dual-world mechanic."

Chris and the team have broadened their horizons with Guacamelee. What could so easily have been a hackneyed tying-together of erroneous details has instead been imbued with a passion for myriad aspects of the Mexican way of life.

Throughout our conversation, Chris delivers tidbits about the culture and fairytale history of the country as if he had been studying it his entire life. Early into the play session, we meet Xtabay, the girlfriend of Carlos, the game's primary antagonist. "She's based on this character in Mexican folklore who would wait for men to walk home when they're drunk, and she would seduce them and they would disappear and never make it home." There is a fascinating level of mythological depth here.

Such attention to specifics might offer the impression that Guacamelee is overly serious about its subject matter. In any brawler, the core component is fun. Rest assured that Guacamelee is fun. Riffing on its Metroidvania roots, the game centers around three-hit combo mechanic. Players can string these together with in combination with directionally-controlled power moves, such as an upper cut and a head-butt. These moves also serve as ways to access the game's different areas. Jumping and using the uppercut amounts to a double-jump, granting access to hitherto unreachable heights, and so it continues.

"We wanted to allow players enough time to learn all of the various movements and actions. There are different colored blocks, and each block refers to a specific superpower. Uppercut is red and doing so leaves a red trail, head-butt breaks yellow blocks, and so forth. We do that so that early in the game, you can recognize where you can and can't get to."

If that breed of exploration does not sound like enough fun, players may also transform into chickens. Yes, chickens. Still with me? Chris excitedly argues in favor of these poultry powers.

"Okay, so a) chickens are awesome and b) well, we fell upon it as a joke. We didn't intend to keep it, but it turned into a way to access areas that the full-size player couldn't access. We soon embraced the idea. You always see chickens wandering around rural Mexican towns. In the game, there's a storyline section where the player is transformed into a chicken, and there's a whole portion of gameplay like that."

Such a combination of inspired art direction, cultural symbolism, and tried-and-tested gameplay mechanics add up to make Guacamelee's proposal all the more tantalizing. As our session draws to a close, I ask Chris how he feels to be this close to Guacamelee's release. He leans forward to reset the demo, then turns to me with a smile: "Yeah, we're excited."