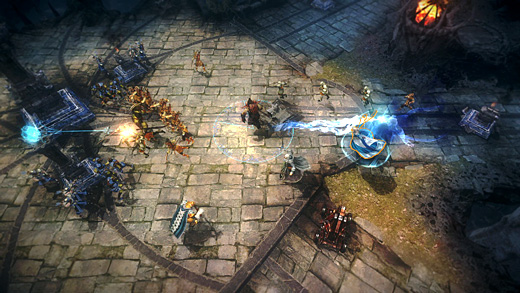 LOW Getting ambushed and destroyed before I knew what hit me.

Despite its relatively unannounced appearance on virtual and retail shelves, Guardians of Middle-earth

is an important moment in console gaming. With its release, Monolith Productions is the first developer to release a MOBA on consoles, and they've released a fantastic one at that.

First off, some readers may be wondering what exactly a MOBA is. MOBA (which stands for multiplayer online battle arena) is a genre borne out of a specific modification (Defense of the Ancients, or DotA) for an old Warcraft game. In the past few years, it has been gaining increasing attention in the PC space, with Valve and Blizzard even competing over rights to the "DOTA" name for their own creations.

In a nutshell, gameplay revolves around two teams competing to invade the other's base, done by attacking along multiple paths which are guarded with towers. The first team to destroy a base is the winner. It's fast-paced, action-heavy, and in short: so hot right now.

Play begins by choosing a "guardian." This is the player's character, and each guardian has a particular set of skills and abilities. Some guardians are melee, some use ranged attacks, and so forth. To increase a guardian's power, they must earn experience points by killing other players, or by killing AI creatures that fight for either side, known as "creeps" or "minions." Over the course of each round, this earned XP enables upgraded abilities to last longer, cause more damage, or have a wider range, for instance.

Combat tends to take place through one of three "lanes," which act as pathways from the player base to the enemy base. These paths are defended by towers, so the player's aim is to systematically destroy them in order to advance, all the while defending one's own towers from other players. Most sessions involve a lot of back-and-forth over which lanes to focus on, who should be defending or attacking, and who should look at unlocking team buffs from the shrines scattered throughout the map. There's a lot to do and it can be overwhelming at first, but before too long, MOBA-style games create an itch that cannot be scratched anywhere else. Guardians of Middle-earth is no different in this respect, but it does add a few new elements to the formula.

The prime concern for anyone already familiar with the gameplay is how it translates to a gamepad. All fears may be checked at the door—Monolith have performed commendable work in cleverly mapping the interface to controllers in a way that keeps the action moving and avoids getting tied up in menus during the heat of battle.

The traditional style of play one might expect on a PC has also been streamlined for consoles. However, this isn't an example of a game "dumbing down," but one where almost every design decision has been made for the better. There's little difficulty in getting to the action, and much less time that needs to be spent learning potentially-overwhelming details. Dota 2 and League of Legends have a reputation for their deep skill customizing, but this can be daunting and unappealing for newcomers. With a robust and immediate combat system in place, Middle Earth's the finer points are there to be picked up with practice, but aren't as much of a barrier as the fine-tuning in its PC siblings can be.

The last big difference is the use of the Lord of the Rings license, which does much to bring excitement to the genre. With the leading titles, there isn't too much focus on story. As such, choosing to play as well-known characters such as Legolas or Gandalf imports a thrill that few other MOBAs can immediately offer. While it's unlikely that the trilogy's stars have lent their voices to the game, the characters do bear their likenesses and the performances sound as close to the real thing as one could need for immersion.

In Guardians of Middle-earth

, console players finally have the chance to investigate a hitherto unknown area of gaming, and it's arguably one of the most positive experiences I've had in the genre. Licensed games are often to be taken with a pinch of salt, but that is most certainly not the case here. With a quiet month between now and the new year, this is a title that should most definitely be on the radar. Rating: 7.0 out of 10.


Disclosures: This game was obtained via publisher and reviewed on the Xbox 360. Approximately one hour of play was devoted to single-player modes and five hours of play in multiplayer modes, which is the game's focus. Due to its ongoing nature, it was not, and cannot be (at time of print) completed in the classic sense.

Parents: According to the ESRB, this game contains fantasy violence. There is no gore, though the game is predicated on destruction and killing. Fire, magic, and hand-to-hand combat are the extremes on display here.

Deaf & Hard of Hearing: Character voice-overs inform players of some important off-screen events, such as areas of enemy attack. There are small alerts that may show on the map, but this won't happen in all instances. MOBAs also typically involve a lot of team discussion, so this could be a hard sell.