When did the Dream Become a Nightmare? 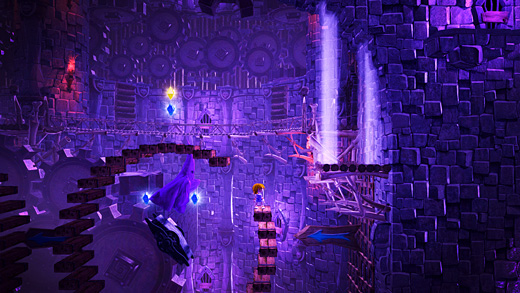 HIGH The blistering SID-metal half of the soundtrack, courtesy of Machinae Supremacy.

LOW Puzzles that try, stretch, and ruin your patience time and again.

WTF How many precious stones can you fit in one game?!

Kickstarter games, by their very nature, are going to be held up for closer inspection than their publisher-funded siblings. After raising over $180,000, Black Forest Games had reached their base goal for "Project Giana," as it was known while in prototype, but had fallen short of the three further tiers on offer. What was most concerning about their funding model was this image:

What we have been delivered, by Black Forest Games's own admission, is the "basic game." And boy, does it ever feel that way…

From the moment that Giana Sisters: Twisted Dreams launches, one can't help but feel that something is missing. The menu looks rushed, the settings screen leaves a lot to be desired, and it generally feels confusing to the uninitiated. Add in the fact that the game cannot be launched from this menu without a further mouse-click despite the "Play Game" logo being a gamepad and a start button, one can't help but begin to worry.

After starting the "Adventure" mode, we are treated to rudimentary shadow puppetry that sort-of, kinda-vaguely, not-quite explains that something may or may not have happened to cue the events of the game. Two girls are sitting on a bed, when a jewel appears and sucks one of them into a vortex. The other girl then jumps into the vortex after her. Are these the titular sisters? Players are largely left to draw their own conclusions on this and more as play progresses. A lack of any script or voice-acting was yet another indication that this game has been rushed to release without adequate polish. However, the central concept of gameplay is a dual-worlds mechanic—a brilliant, if flawed, idea—and the only shred of original thought on show in Twisted Dreams.

Worlds come in one of two flavors: "cute" and "punky," which, besides being asinine terms, capture their essence: one is fairytale; the other akin to a Tim Burton movie. The twist is that the fairytale world is where punky Giana resides, and the Tim Burton-esque world is where her cute half calls home. 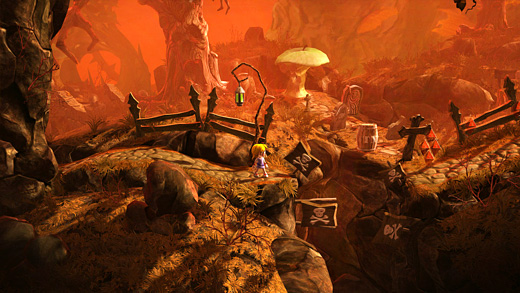 Players will be required to switch between the two of these at breakneck speed throughout each level in order to navigate various obstacles while making use of the special floaty jump and quick dash move associated with each half. It will arguably take players more than a few levels to get a full grasp on how to unlock the best of what this mechanic has to offer, but the constant switching causes the world to sway between states at such a rate that it soon begins to lose its appeal. It's a sorry state of affairs, but with a frustrating difficulty level posed to players, there are only so many times that one can be shown a neat trick before it fails to further impress.

If plot motivation was unclear, the gameplay that follows is even more so. Throughout the levels are huge blue crystals, pink stars, and then three colors of gems: red, yellow, and blue. Of the last three, you can collect yellow in either of the worlds, and only red or blue depending on your current form. The blue crystals unlock artwork viewable in the game's Gallery, while the pink stars served no purpose I could ascertain. It's never even particularly clear what collecting the smaller gems is for, only that Giana can only collect them in a certain form. This was yet another point scored on the tally of misguided moments in Twisted Dreams.

The 2.5D visuals are gorgeous, and those who have seen or experienced the Trine series will draw immediate comparison, to which Twisted Dreams holds its own. Unfortunately, it's largely a case of style over substance, as the geography of the levels persistently blends itself with the scenery, too often resulting in players jumping to their death. Points of peril are also consistently unclear in this game. For instance, sometimes water is something in which you can swim, while at other times, you will die as soon as it's touched.

While much of Giana Sisters goes wrong, the score is one of the game's genuine successes. The soundtrack is split into one flavor for punky Giana, and one for cute Giana. Provided by Giana Sisters' original composer, Chris Hülsbeck and Swedish SID-metal (Commodore64 soundchip-infused synth metal, genre fans) band Machinae Supremacy. In the launch menu, the game can be configured to only play one of these soundtracks, and this is recommended since the music switches when the worlds do. It's a jarring experience. Both are wonderful works in their own right, but as a longstanding MaSu fan, I was quick to pledge my allegiance.

In my view, not much about this game feels finished, and it's hard to ignore since the team offered four separate stretch goals for their Kickstarter while only attaining the most base. Fans of the Giana Sisters likely Kickstarted this game, thus earning a copy of it in the process. However, for those who don't already own a copy, there's no way that I can recommend it without it weighing on my conscience. Giana Sisters: Twisted Dreams is simply not worth the time. Rating: 4.0 out of 10.


Disclosures: This game was obtained via the publisher and reviewed on the PC. Approximately five hours of play were devoted to the single-player mode, and the game was not completed. There are no multiplayer modes.

Parents: According to the ESRB, this game contains comic mischief. Aside from the macabre use of coffins, etc in the punky world, there's not much here of concern to younger players.

Deaf & Hard of Hearing: During my time with the time, I encountered no significant audio cues. As an old-school platformer, sound is not too integrated with gameplay. No problems should be posed as a result.