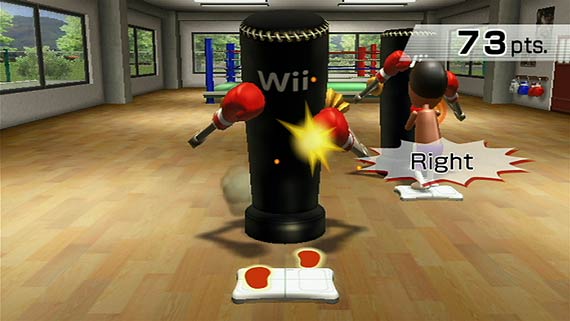 After hurting my back (diagnosed as a possible muscle spasm by my physician), I was pretty depressed. I had just started exercising regularly for the first time in years. I felt stronger than my college years and I had lost over 10 pounds. X-rays didn't show any herniation of my spine, which was a relief, but I was still incapacitated for a week.

On the second week after my injury, my back was about 80 percent recovered and it felt like a good time to do some light workouts. In addition to resuming my power walking, I thought the low-impact/resistance exercises in Wii Fit would be a good way to ease back into my weight training.

So for my first Wii Fit rehab program, I thought it would be a good idea to start with 10 min of aerobics to get the heart going, 15 min of Yoga to stretch out and around 30 min of strength training to get my core back into shape.

Starting with aerobics, I was excited because I had finally unlocked the boxing exercise. Like the regular Wii Sports boxing game, the Fit version requires the use of the nunchuck attachment, but after trying it, my enthusiasm faded. The exercise consists of an instructor demonstrating a punching/stepping combination and then having the player perform the combination simon-sez style. The end of the session rewards players by being able to freely swing away freestyle, but overall, the start and stop pace of the exercise didn't work up much of a sweat and felt like a wasted opportunity for a really awesome workout. Perhaps Victorious Boxers on the Wii would be a bit more intense. Thankfully, the Super Hula Hoop was more productive. Like a commenter said in a previous post, try doing six minutes of continuously hula hooping is HELL!

I was finding the rest of the workout to be a bit of a mixed bag as well. The lack of any structure was also getting a bit frustrating. I was finding little rhyme or reason as to how any form of a routine is structured. Some of the Yoga poses like the Warrior and Chair and Strength Training exercises like the Tricep Extension and Side Twists—were ridiculously easy while some like the horizontal Arm and Leg Raise and Plank—were incredibly tough. The amount of time on holding poses and repetitions felt too short.

Since many of the exercises were newly unlocked to me, the program requires that you watch a demonstration of the exercise before trying it on your own. This is definitely a good thing for the more advance Yoga poses, but my session lacked intensity as a result and I had to chalk up a light day getting acclimated to the intricacies of the program.