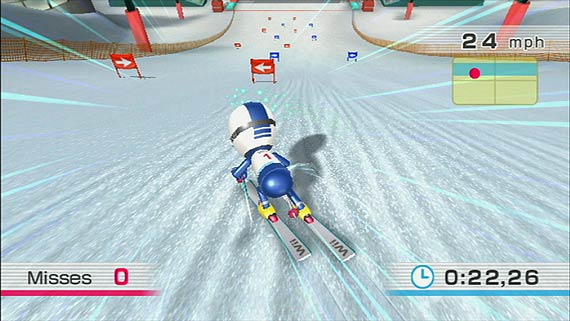 I normally try to do spread out 40 plus minutes of power walking everyday for cardio, but since I had an intense full-body workout in my home gym yesterday (with no rest time between sets), I figured I'd take it easy on my rest day. Without any strenuous activity planned, I thought this would be a good time to test out of the Wii Fit balance games.

On my second day of Wii Fit, I began the session with a Body Test, which measures your weight and calculates your BMI and Wii Fit Age. The program does not automatically scan your weight each session so you have to manually select this option to chart your progress. My BMI increased a fraction to 23.56 and my weight went up nearly went up a pound to 173.9. This felt a little strange since I had an amazing workout the day before and sweated buckets. Did my difference in clothes play a factor? The program asks the weight of your clothes before calculating, but it's not like I weight my clothes and know the exactly how much they weight. I also performed miserably on the one-leg balance test so that upped my Wii Fit age to a whopping 38! I did find it funny that the Wii Fit guide (shaped in the form of the balance board) mentioned to not be discouraged by the setback and that progress would be slow. Boy I can't wait for Wii Therapy!

I loaded up Soccer Heading first. The object of the game is to head incoming soccer ball in one of three possible positions (left, center, right) and dodge any other foreign objects. I was immediately put back by how poorly I did on my first time out as I managed to only score a measly four points! If I thought these games were going to be a breeze, I was wrong. The pressure on the balance board is extremely sensitive so typical kinetic action in sports becomes over exaggerated and simple actions like standing straight-up are more difficult than I would have thought because returning to a precise balanced middle between frenzy dodges is not something I do everyday. Add to the fact that heading movements have a degree of travel time and inertia so anticipation is required to succeed. Spurned by my competitive side, I played several more times to increase my score and I finally managed to score in the several hundreds, but I was still ranked very low and would need a lot of practice to get higher.

I thought Ski Slalom was an awesome extension of Wii Sports. It's a very familiar setting made a tad more interesting with the balance board just like the other Wii Sports titles. Shifting weight to the left and right of the balance board controls the direction of the skier. Again, the precision required was not something I was used to. I'd either over-steer or under-steer and it took several tries to get a halfway decent time, but again, I ranked extremely low. Scoring on these games is tough!

The rest of the games follow a similar pattern. Simulating jumping by bending your knees and straightening up for Ski Jump and walking in place for Tight Rope walking were interesting applications of the balance board. The Table Tilt game was just kind of frustrating for me.

I ended the day testing a couple of new Yoga poses and I logged in a total play time of 33 minutes for the day. I didn't break much of a sweat, but I do see some benefit in improving my balance on some of the games. I'm not sure how often I'd select them over the more exercise-oriented activities. I do think kids and groups/families playing together will have a good time with the series of balance games, although switching between profiles could be annoying. Nintendo needs to flesh out quickplay multiplayer options for the next iteration quick otherwise, there's going to be trouble in senior communities across the country.

[quote=Dale Weir]Congrats dude. I didn’t think you’d make it to Day 2. 🙂 Not that I thought you’d quit, it’s just that daily updates require commitment on top of the training.[/quote] I don’t plan on using the Wii Fit daily so these numbering is reflective of the days I use the Wii Fit for training or gaming which could be 1-3 times a week. [quote=Dale Weir]One thing though, don’t sweat (pun intended) daily weight loss or gain. The human body can fluctuate by about two pounds on a daily basis. On top of that depending on what kind of weight-loss… Read more »

Congrats dude. I didn’t think you’d make it to Day 2. 🙂 Not that I thought you’d quit, it’s just that daily updates require commitment on top of the training.

One thing though, don’t sweat (pun intended) daily weight loss or gain. The human body can fluctuate by about two pounds on a daily basis. On top of that depending on what kind of weight-loss diet/training regiment you are on, you could actually gain weight before you start losing it.

Somewhere in that Wii Fit manual Nintendo has to have mentioned this stuff or it’s not doing its job.