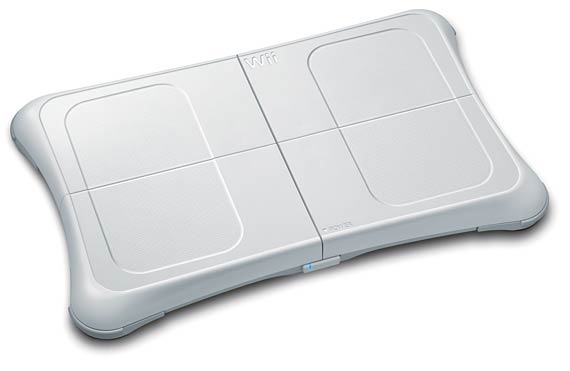 Prior to purchasing the Wii Fit Balance Board

, my health had been on the decline for years. After getting married, having a child, and buying a home in New Jersey, I stopped exercising due to a perceived lack of time and at the age of 32, I thought physically my best days were behind me. I felt weak when moving things around the house and my eating habits were atrocious. I frequently ate fast food and surrounded myself with chocolates and donuts at work for snacks. My waist had ballooned up from 29 inches in high school to 34 inches (with a nice pot belly to match) and I reached a new personal low when I had to buy new pants because I no longer squeeze into my old ones. To top things off, I developed an unexplained randomly occurring facial tick on the right side of my face that had become rather distracting to friends and family.

Three weeks ago, I reach my breaking point and decided it was time to turn things around not just for me, but also for my family. My wife, Regina's weight had also increased dramatically to borderline unhealthy levels and the last thing I want would to do is pass that along to my soon-be-three year old son Ryan. I decided this isn't the lifestyle I wanted for me and my family and that 30 years old wasn't the end, but only the beginning (Thank you Tony Robbins

). I went out and bought an inexpensive bench from Sears, converted our sun room into a little make-shift gym and started to lift weights every other day. I also power walk my way to work and during lunch break every weekday for cardio and my wife and I started doing the Atkins diet to improve our nutrition.

So two weeks into weight training and one week into Atkins (Induction phase), I had already lost 7 pounds and I much felt stronger and more energetic. I realized that Regina needed to do more cardio on a daily basis and I wanted to mix things up to keep my workouts fun and fresh. I just ordered this funny-looking punching dummy

and was considering a rower when I realized the Wii Fit was due out in stores this week. I'm weary of gimmicky exercise equipment, but I liked the idea of Wii Fit being able help my family squeeze in more cardio exercises on busy days and in the least, I thought it could serve as a weight monitor to track my overall progress. 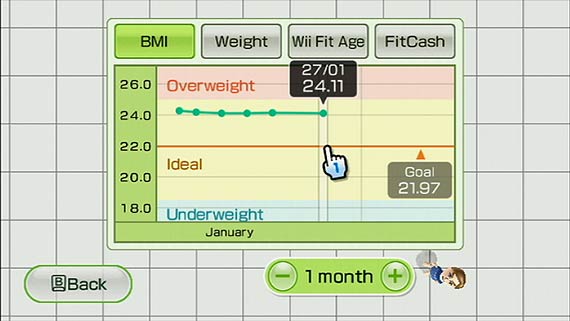 So on Monday, during my lunch break, I walked over to Nintendo World in Rockefeller Plaza and stood on line for 30 minutes to pick up my Wii Fit (damn it was much heavier than I expected). Once it was synced up with the Wii console at home, Regina and I registered our profiles through a series of questions about our height and age and a couple of balance tests by stepping on the board. My BMI (Body Mass Index) was 23.50 (generally good) and my weight was 173.5. Through the program, I set a goal of losing 13 pounds in three months (the Wii recommended no more than 3 pounds per two weeks) and Wii Fit wanted to see my BMI go down to 21.74. The program also assigned me a Wii Fit age of 30, whatever the hell that means.

Afterwards setting up my profile, I didn't have time for a serious workout so I went through the series of exercises to get more acclimated. The training is divided into four categories: Aerobics, Yoga, Strength Training and Balance Games. In going through the initial exercises (more gets unlocked as you progress and earn fitness credits), I learned the following: 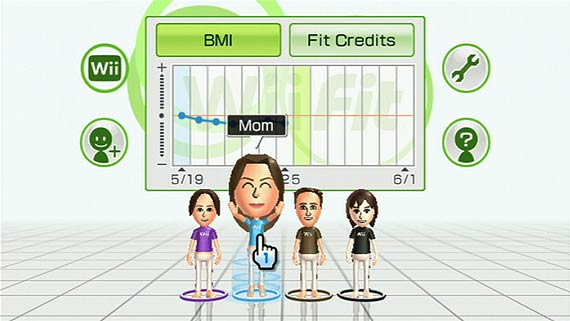 Once each exercise is completed, you are giving an arcade-like score and ranking for competitive fun and tracking improvement, Wii Fit credits are awarded for unlocking stuff and workout time is accumulated. My first day ended with 25 minutes of training and a generally positive reaction. I'm hopeful that Wii Fit can provide me with decent supplemental training and have a positive influence and benefit to my family. I'm excited to see how the Wii Fit will perform in days to come.

I though this was a funny comment: Three complete generalizations with no reasoning/evidence given. In response to Mike’s point 1: The Wii fit may not be perfect, but it can certainly help people on the road to improving their fitness. Point 2: And, obviously, you’d have to change your lifestyle to get a benefit from it (i.e., you’d have to use the Wii fit). Point 3: ????

My wife and I gave each other the Wii console with Wii Fitness for Christmas. Fitness was our prime reason for buying the Wii. OK, it’s not the same as hitting the gym or playing adult soccer (which I did for years) but it’s better than sitting in a chair watching TV; which we were tending to do more of. An hour of Wii fitness CAN be much better than nothing at all but like traditional training, you have to push yourself; and that is one thing going for Wii Fitness. It’s fun, motivational and can be challenging. I’ve used… Read more »

So for my first Wii Fit rehab program, I thought it would be a good idea to start with 10 min of aerobics to get the heart going, 15 min of Yoga to stretch out and around 30 min of strength training to get my core back into shape.
——————————
michael.gentry

Body building is not fitness training. Body builders are bloated and take drugs and are definately not fit.

The WII fit is a million miles from true fitness training and anybody who thinks it is a beneficial fitness machine is deluded.

If you get any benefit from it at all, it says more about your own lifestyle than the product.

If you don’t understand what fitness is by the time you are 30, you never will.

My husband got me the wii fit for my 30th birthday (last week). At first I was a bit disappointed, I was hoping for a Nikon d60, but hey…we can’t always get what we want. I have to say, I’m in LOVE with my wii fit. I have 3 children, a tiny living room and it’s still FABULOUS. My two older children (4.5 years and 6 years) love it too–especially the 6 year old, she’s got better motor skills, so it’s more fun for her. So you wonder if it’s challenging??? Ever tried hula hooping for 6 or 10 minutes… Read more »

[quote=Anonymous]You might want to redraft your writing before uploading it though, or get a proofreader. There are some occasional typos or grammatical errors which have no place in a professional site. It’s not a huge issue, but it’s worth doing all the same.[/quote] Our reviews and features normally go through a more rigorous proofing process, but this is my personal blog and I typed it up 3am the morning to get it up for Wii Fit launch day before I went to work. We’re not a professional site, but its I appreciate that you think so highly of us to… Read more »

Thanks for an interesting and informative article. It was a pleasure to read.

You might want to redraft your writing before uploading it though, or get a proofreader. There are some occasional typos or grammatical errors which have no place in a professional site.

It’s not a huge issue, but it’s worth doing all the same.

I don’t plan on getting Wii Fit until I hear more impressions, but I also plan to use it as a supplementary form of exercise, primarily for its yoga and keeping track of my weight. Weight, however, has never been a problem for me, it’s muscle mass. And as far as I know, it only tracks BMI, so if I was a hugely muscled guy, I’d probably be considered overweight. However I’ve always floated around the 160-170 lbs. range, and with my height of six feet tall, weight is definitely not an issue with me. Therefore I don’t see any… Read more »

As a trainer, I’ve always felt like selling fitness equipment is a sort of “freezers to Eskimos” kind of business. Some home gyms can be effective, but they tend to collect dust. And much of it is completely worthless, but sells on empty promises and bad science. When I look at the Wii Fit, I wonder how many of the exercises will be truly demanding. Something I find often in practice is that very few people, even those who have been working out on their own, are really aware of how hard they have to work to get results. It’s… Read more »