I was scanning the NYTimes.com Arts section yesterday and was surprised to find two articles about Halo 3 featured there. I wondered when The New York Times started qualifying videogames as "Arts?" With all the recent debate about whether or not videogames should be consider (good or bad) art, would it not be of cultural significance and a sign of the times (no pun intended) if the venerable news institution declared that videogames was indeed worthy of being covered alongside the paintings by artist Willem de Kooning, the singing of soprano Natalie Dessay or comedic "genius" of Dane Cook in Good Luck Chuck?

Upon closer inspection of the two articles in question, it turns out to be not such a bold declaration of videogames cultural ascendance, but it does still reveal several interesting topics of discussion. 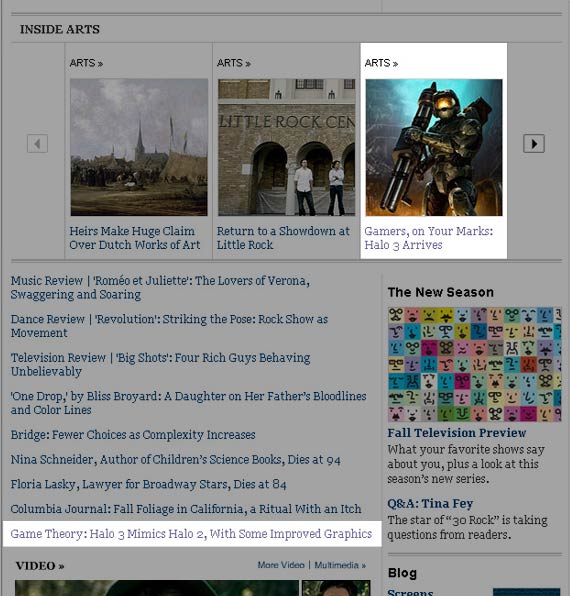 The first article titled "Gamers, on Your Marks: Halo 3 Arrives," published September 24 (a day before the release of Halo 3), elaborates of how Microsoft expects their flagship title to break the record for most revenue sales of any entertainment product in a single day. While the article does reside in the Arts section of the times, the article would be more accurately categorized as "entertainment" in the leisurely sense. The NYTimes.com does not have separate section for "entertainment" so the article falls under the Arts section by default. So many dollar figure amounts are mentioned in the article that the article could have just as well been featured in the Business section.

The second article featured in the Arts section is a review titled "Halo 3 Mimics Halo 2, With Some Improved Graphics" (published September 27). Upon clicking on the link, the reader is whisked away to the Technology/Circuits section where the review physically resides. The link in the Arts section is merely a redirect. The review itself also does not take a more arts oriented approach. Rather it conforms to the usual consumer-friendly to-buy-or-not-to-buy second person tone and does little to contextualize the iconography in the game or its artistic value and/or cultural significance.

So if neither article about Halo 3 is particularly artsy fartsy and the game itself—which is still the epitome of hardcore first-person shooting and arena-style deathmatching—hasn't fundamentally changed, why did The New York Times decide that Halo 3 should be featured in the Arts section?

Credit Microsoft and their marketing team, who promoted the crap out of Halo 3. Peter Jackson's WETA workshop was commissioned to produce impressive documentary-style short films. Commercials eschewed featuring gameplay and instead showcased a wondrous museum-like diorama of a battlefield out of Halo—complete with an introspective elderly war veteran waxing poetically about the heroism of their beloved Master Chief. Microsoft blanked the earth with so much hype and advertising that it bought itself beyond the usual technology-driven coverage and into mainstream pop-culture relevance. The release of Halo 3 was going to important if for no other reason other than how big the PR machine had gotten and that couldn't be ignored by newspapers.

The other factor had to be the $170 million dollars worth of sales that the game racked up on its release day. When you surpass Spider-Man 3's opening box-office of $59 million, it's nearly impossible to dismiss the Halo 3 phenomenon as merely technology niche. Newspapers are forced to put the financial success in context more akin to popular entertainment like movies and music.

The New York Times helter-skelter coverage of Halo 3 ultimately reminds us of how relatively new videogames are as a medium and how we are still trying to define its place in culture and society. Someone please shoot me for sounding cliché, but it does appear we are at a crossroads. Should videogames be categorized as "arts" or "technology?" If we continue to cover videogames as both, at one point are videogames treated as "art" and at one point is it "technology?" A wide of array of cutting-edge technology is incorporated into making movies, yet the overwhelming majority of coverage still resides in the arts.

Or perhaps in the age of the Internet, its society that needs to redefine or invent taxonomy to properly describe and document what videogames actually are rather than trying pigeon-hole where we think they belong. Then perhaps we should stop asking the question of "are videogames art?" and start asking "what are videogames?"

Good editorial Chi. The Halo series has been significant in that it seems to directly influence market and development trends in the industry. Halo 1’s biggest influence was its smooth control scheme, two-weapon juggling and shields. Halo 2’s, however, is more in the marketing, the sudden and unfortunate popularity of cliffhanger endings, and special editions. With the most singularly unique thing about Halo 3 being its marketing campaign, is there any hope that other publishers will follow the game in its footsteps, given the enormous amount of return generated from Halo 3? The switch in focus from “Is it art?”… Read more »

I think the real question is ‘why give a shit about what the new york times thinks’? Or maybe: why is it so behind the times?

I too relish the day that video game enthusiasts move beyond the “art” debate.
“Art” as it is used in the game community is a cipher for credibility. As such, the debate as it stands is more about the psychology and social standing of gamers than aesthetics.
Instead of analogizing video games to other, more (rightfully) credible mediums, game enthusiasts need to address how ideas and emotions are conveyed through the language of their medium, and how the industry business model can better accommodate developers who wish to push content boundaries.

Does the New York Times always title their game reviews under “Game Theory”? This heading looked promisingly reverential until I read the review, which as Chi said is purely a consumer guide. The lack of nuanced opinion in that review really annoyed me. I know it needs to be readable by the average Joe browsing the NYT, but when it’s the biggest game of the year, willfully obtuse statements like “Halo 3 is Halo 2 with somewhat better graphics” and “a lot of things get in your way and you kill them” demonstrate such a lack of understanding about the… Read more »

it makes me question people who consider video games “art” that they care so much about what other people think, whether game players or otherwise. do you think it would bother roger ebert for a second if one of us declared movies not “art”? and do you think it would diminish nabokov’s appreciation of literature, chess, or any other thing as that which elevates him to a blissful plane of appreciation if any of us knocked it? of course all art can be questioned; it can be affirmed, denied, and dismissed. would it really make you all feel better if… Read more »