The Devil (Survivor) is in the Details 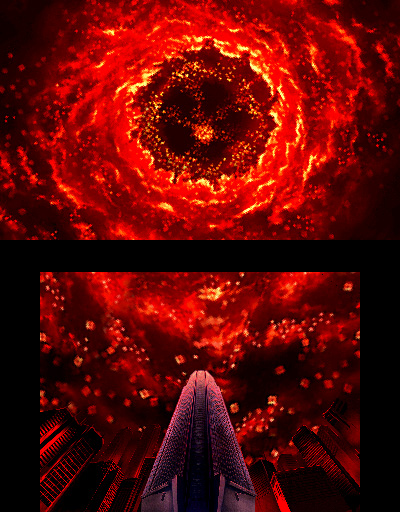 HIGH Fusing a kick-ass demon after 30 minutes of planning and multiple steps.

LOW The voice actress for Midori has as much appeal as listening to chalkboard scratching.

WTF So God imposed different languages on humanity as punishment for not living virtuously? Mind blown.

In a recent blog post about the merits of Eurogamer's Uncharted 3 review, game developer David Jaffe (God of War, Twisted Metal) made an interesting distinction between narrative-driven games like Uncharted and Call of Duty: Modern Warfare and ones that serve the "Gods of Gameplay." It's a somewhat deceptive distinction to make since all games contain some form gameplay, but what Jaffe was alluding to is that narrative-driven games are focused primarily on telling a story and may employ filmmaking conventions at the expense of user-interactivity and decision-making. Gameplay-driven games, on the other hand, are less concerned with telling a story and more focused on engaging the player with choice, customization, challenge and reward.

Jaffe makes it clear he prefers to make gameplay-driven games, and I've also directed criticism at games that don't prioritize gameplay because it is fundamentally unique and intrinsic to our appreciation and understanding of video games as a medium. However, not all games will fall neatly into one category, and a game can contain elements of both.

in particular is one such case study when viewed through the prism of the narrative vs. gameplay debate. Overclocked is a throwback strategy JRPG (Japanese role-playing game) originally released in 2009 for the handheld Nintendo DS, and now ported to the 3DS with minor aesthetic tweaks and gameplay enhancements.

The true hallmark of the JRPG genre is an epic and engaging narrative, but the genre is also notorious for pumping out multitudes of indistinguishably generic clones that rely heavily on anime stereotypes and storytelling clichés. Devil Survivor avoids many of the usual JRPG pitfalls and defies expectations by creatively blending together an effective character-driven storyline with a dizzying array of traditional and non-traditional gameplay conventions. It's almost magical in the way each side elevates the other, rather than bringing the two into conflict.

The story of Devil Survivor centers around a group of young friends trapped in Tokyo as part of a government conspiracy to lock down the area when demons begin to infest the city. The main objective of the game is to uncover the mystery of the lockdown and escape, or to survive the cataclysmic ordeal within seven days.

As a means to overcome enemies and challenges encountered throughout the game, players are given a device resembling a 3DS that grants the user the ability to summon and control demons in turn-based battles. "Tamers," as they are called, are also able purchase other demons through an in-game auction house and fuse demons together to create even more powerful demons. 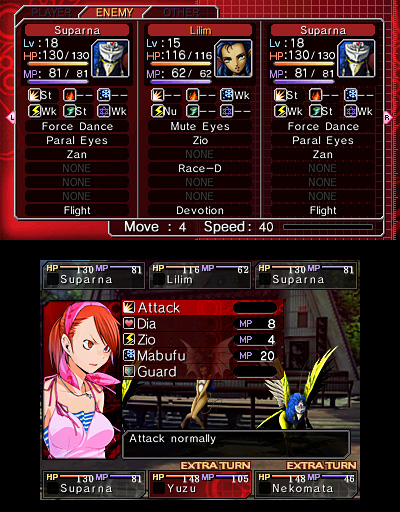 While this may sound like the usual video game contrivances, the devil is in the details (pun intended) and the execution by the developers at Atlus is nothing short of brilliant. Devil Survivor is set in the renowned Shin Megami Tensei universe. Anyone familiar with this long-running video game series knows that it's a fantastic world that fuses elements of the macabre, occult, religion and mysticism with a culturally authentic modern day Japan using real-world locations and landmarks as part of its setting.

The writers and designers of Devil Survivor are also equally adept at taking that world and cleverly infusing its design elements within the flow of the story. A great example of this is the introduction of the "Death Clock" convention.

The "Death Clock" is a number displayed above each character in the game that shows the amount of days that person has to live. In a lesser game, the "Death Clock" would serve as just another data/menu point for a player to negotiate outside of the context of the story. In Devil Survivor, the cast of colorful characters are aware of their own Death Clocks and of those around them. This knowledge provides an opportunity for some for some rarely-seen drama and tension in how characters interact with one another. Knowing a person (or themselves) could be dead in a matter of hours allows the characters to open up and forces them to make life-altering decisions throughout the game.

Those decisions aren't something the player observes passively either. Over the course of seven days, players are progressively challenged to make more choices during battles and conversation trees that play a critical role in how events might unfold and who might live or die during the ordeal. While some of the decisions may seem arcane and simplistic at certain junctures, I still appreciated the degree of gradations that are available in the game's six different endings, which far surpasses what we see in many of today's games.

While there's no doubt that Devil Survivor breaks the mold of the JRPG, there are a couple of problems that it wasn't able to overcome. One is the heavy amount of grinding normally associated with JRPGs. While I enjoyed the hybrid turn-based battles and was completely absorbed by the demon fusion process, one thing I couldn't get around was the sheer amount of grinding necessary to buy and fuse higher level demons necessary for extraordinarily difficult later stages.

One other point of criticism of Overclocked is that while having multiple endings makes the game highly replayable, it's ultimately pointless if the time required to experience them all is borderline ridiculous for the average adult gamer with limited time. Granted, it's a tremendous help that the game allows players to bring previous demons and enhancements into a new game based on certain achievements earned, but some sort of device that would allow a player the convenience to flash-forward and revisit certain key points of the game or even just more save slots would have made subsequent playthroughs less arduous and frustrating.

is a brilliant game made all the more notable as many of today's games shift towards Hollywood-like narratives. In the current climate, it's ironic that a little game originally made for an underpowered handheld is full of the kind of story and gameplay that reminds us of the potential that video games hold as an interactive medium of expression. Overclocked is certainly blessed by the "Gods of Gameplay." Rating: 9.0 out of 10.


Disclosures: This game was obtained via publisher and reviewed on the 3DS. Approximately 140 hours of play was devoted to single-player modes (completed 3 times). There are no multiplayer modes.

Gamers who played Devil Survivor on the DS: While the core gameplay in Overclocked is largely unchanged, Atlus has added additional content. New demons and battle skills can be unlocked. The additional voice-acting for the large cast of characters is surprisingly good with the exception of the performance of Midori. Each of the major story paths have been given an extended 8th day that expand the story details further.

3DS owners: Your eyes can rejoice because Overclocked holds the distinction of perhaps being the only 3DS title that barely has any glasses-free 3D content (with the exception of the opening introduction graphics and the cut-scene for demon fusions).

Parents: According to the ESRB, this game contains fantasy violence, language, mild blood, partial nudity. While there isn't any profanity and/or grotesque imagery to be concerned about, Overclocked isn't a game made for young ones. The story contains very mature themes laced with the occult, religion and theology. Some of the demons are highly sexualized; leaving very little to the imagination in terms of garments.

Deaf & Hard of Hearing: Being a traditional JRPG, all the dialogue and menus in the game are text-based and there aren't any significant audio cues that should pose any problems.

This review reminded me that I still need to finish this game. Last time (as in last year), I was trying to beat some huge bee on day 6 or 7.