Zombies, bikinis and swords, oh my! 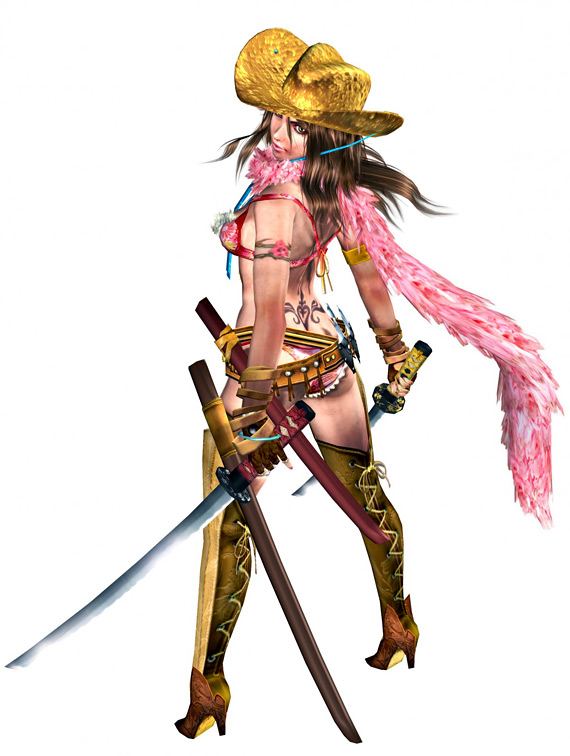 HIGH Going into "Rampage" mode and unleashing a serious can of whoop-ass on a horde of zombies while watching their blood and limbs splatter across the screen.

LOW Wasting too much time trying to execute a "Cool" 12-hit combo before realizing it's insanely impossible for gamers without super-human timing skills.

WTF Where does Aya find the time to wax between all the zombie slaying?

OneChanbara: Bikini Samurai Squad is a game that's begging to be loved and panned at the same time. I'd have to be dead inside if the thought of Aya, the game's string bikini-feather boa-cowgirl hat-clad-samurai-sword-wielding zombie hunter didn't crack a smile on my face. What I find even more ironic is that developers didn't think that was enough crazy for one game. Instead, Aya's tag teamed with her jailbait sister, Saki, who fights the undead in a school girl uniform, and Annna (the triple "n" is not a typo on my part) the mysterious cop whose plunging neckline and heaving cleavage would make J-Lo blush.

Yet after hours of hacking and slashing my way through legions of zombies and unlocking halter tops and hot pants to play dress up with the girls, something unexpected happened. I actually started to like this game. Against all odds, there were several redeeming and addictive qualities that drew me in. 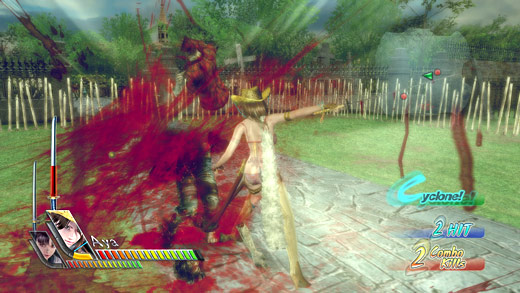 Beneath the deceptively mindless button-mashing lies an unexpectedly layered and complex timing-based combo attack system. "Cool" combos (as they are called) require a series of precisely timed button presses to unleash, and they are faster and more powerful than normal attacks. Every swing of the sword becomes an opportunity to do something spectacular, and as a result these combos feel deeply satisfying when executed properly.

In terms of rewards, OneChanbara also incorporates an Xbox Achievements-like Quest feature, where players are tasked to complete random objectives like completing a stage without taking a hit, or performing a special attack a specific amount of times during a stage. Players are rewarded with clothing items to customize the heroines' outfits and profile achievement points for completing these objectives. This is by no means an innovative feature (and some of the Quests are near-impossible for gamers that don't have super-human timing ability) but like a good pop song, they provide a good hook and add a degree of depth to an otherwise monotonous game.

The final thing that stands out to me about OneChanbara is that its creators seem to really care about its characters and the gameplay. Aya and Saki, despite the ridiculous fetish-driven outfits, come across as dignified and strong-willed protagonists. The designers have incorporated some feel-good gameplay in the hack n' slash style—even if it's targeted at the hardest of the hardcore. This isn't great art, but it's clear that the developers love the subject of their game and OneChanbara is worth playing for that reason. Rating: 6.5 out of 10

Disclosures: This game was obtained via publisher and reviewed on the Xbox 360. Approximately 19.5 hours of play was devoted to single-player modes (completed 1 time). There are no multiplayer modes.

Parents: According to the ESRB, this game contains blood and gore, intense violence, language and sexual themes. It's pretty easy to tell from the box art that OneChanbara isn't meant for young ones. While the profanity is PG and there isn't any actual sex (and only partial nudity in the introduction movie when Aya is taking a shower) the game is highly sexualized with the well-endowed heroines wearing ultra-revealing thongs, cat suits and skimpy bikinis. In addition to surreal amounts of bloodletting and decapitations when slashing through the countless zombies, there are also some uncomfortable scenes of violence against women during some of the cut-scenes. All the women in the game are rendered unconscious several times with full-on punches and kicks to the face and body, and Annna is nearly choked to death at one point. The heroines possess supernatural strength and endurance to withstand the blows, but it's still something conscious parents should consider when purchasing for older teens.

Deaf & Hard of Hearing: All the movie cut-scenes and in-game dialogue are subtitled and all the timing-based fighting combo mechanics are accompanied by visual cues. Dodging some of the bullets from zombified police officers will be a little more difficult since you won't be able to hear the gun click noise which serves as a warning to the player, but it's not something that makes the game unplayable.