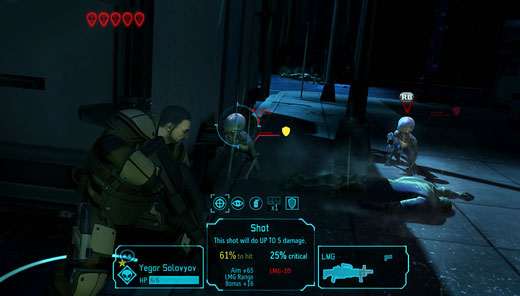 Amidst the sea of near indistinguishable first- and third-person shooters, MMOs and MMO shooters at PAX East, I found it somewhat ironic that two particular titles that stood out to me where both remakes of classic games: XCOM: Enemy Unknown

XCOM wasn't playable on the convention floor, but the developers were giving 25-minute gameplay presentations to limited groups of gamers who were willing to line up for the preview.

The beauty of Enemy Unknown is that fans of the original X-COM can rest assured that this isn't a duck-and-covered shooter with old X-COM elements retrofitted in. This is unquestionably a turn-based strategy game with alien resource and research management at the heart of its gameplay.

During the demo presentation, the developers walked through a classic X-COM-style intercept mission that gave audiences a sense of the tactical combat flow and highlighted the 4 specific roles of squad characters, which include assault, support, heavy weapons and sniper.

The thing that I found most striking about the gameplay was that there was no grid on the play map of any sort. Players select squad members and can freely direct them to any point or cover position, which made the game feel more open and non-traditional/hybrid-ish. 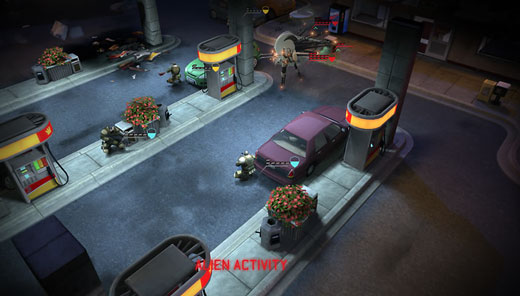 The big visual difference is that once commands are executed, actions immediately play out in dramatic cinematic slow-motion close-ups where you can see the detail and personality of the 3D models interacting with one another in bloody engagement.

Environmental damage to the surroundings and destructible building walls will also play strong factor in the strategic battles. Characters will also not faint and be revived. Death is permanent in order to add to the tension to the gameplay.

Closing out the presentation, the developers also gave a sneak peek of the home base which they likened to a childhood "G.I. Joe aircraft carrier" toy that only the rich kid on the block could afford. In that base, there will be all kinds of options for squad mates to hone their skills and of course research and develop captured alien technology.

Everything from the style of the art to the game design choices made it abundantly clear to me that not only are the developers fans of the original X-COM games, but they have a strong sense of what made them so great and that has me super psyched for this release. 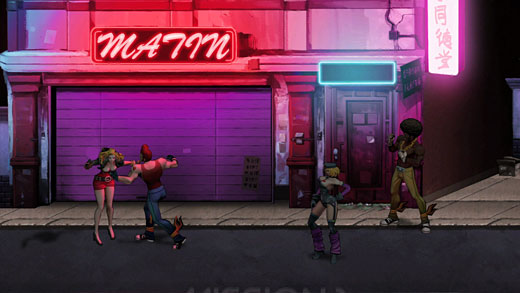 In literally the final hours of PAX East, I also managed to discover Double Dragon Neon tucked away in one of the farthest corners of the exhibition hall.

At first glance, I'll admit I wasn't bowled over. There hasn't been a Double Dragon sequel that really grabbed me since Super Double Dragon on the SNES. Seeing the cheesy "neon" moniker left me a little puzzled.

It wasn't until one of the staff members explained the concept that Double Dragon Neon is essentially a tribute to all things eighties like Big Trouble in Little China did I really get it.

Just recently on the GameCritics.com podcast, we talked about how many eighties action movies would make terrific IPs for games and how it was near criminal that there isn't a Big Trouble in Little China video game.

Well boys, our prayers have been answered in the form of Double Dragon Neon where Marian bears a striking resemblance to Kim Katrall, Billy and Jimmy Lee sport ass kickin' mullets, embarrassing fashion choices abound and when a co-op player goes down, the other player can revive him by symbolically rewinding a cassette tape with a pencil (turning the thumb stick).

The fighting gameplay also felt worthy of the Double Dragon co-op legacy. In addition to the standard punch and kick combos, there were also grappling attacks that could be initiated upon stunning a foe. 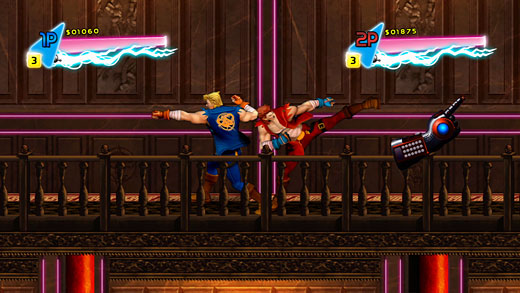 The classic knees-to-the-head and elbow-drops-to-back were absent, but throws and double noggin knockers (if you grabbed two stunned enemies close together) livened up the action. The staff person assured me more grappling techniques would be unlocked as the player progresses through the game.

The hands-on demo ends in a crazy cliffhanger. Entering a Chinese restaurant-looking building reveals itself to be pagoda-shaped rocket ship that launches into space. Once in space, Billy and Jimmy face off against a heavily armored Raiden-looking boss wielding a massive sword with Marian being held captive in the background.

So while the business of video games drive the development of countless first-person shooters and MMOs, I'm happy to see that game culture has progressed to the point where revivals and reimagining's of classic titles actually feels more than just desperate attempts to cash-in on nostalgia.

When done right and in a proper historical context like these two titles, it feels like there's actual cultural value and relevance in revisiting these titles as is so often the case in other mediums.

XCOM: Enemy Unknown is set to release in fall of 2012 for Xbox 360 and PS3 and Double Dragon Neon is due out on Xbox Live Arcade and PlayStation Network in July 2012.