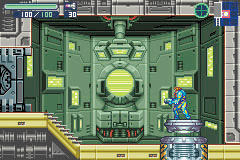 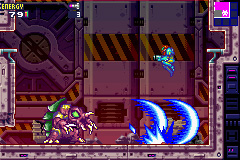 While I can understand Erin's criticism of Metroid Fusion's limited exploratory freedom and overly ushered structure, she doesn't take into consideration that this is a portable title. Gaming-on-the-go has unique design requirements. I played Fusion mostly on my daily commutes to work on the NYC subway system amidst constant distractions like train transfers and jousting with fellow strap hangers. I appreciated the sleep mode that enabled me to unexpectedly suspend play in an instant and resume later. The navigation computer made the start-and-stop transitions easier. Fusion's design favors play in short bursts over marathon sessions.

Nonetheless, I agree that Fusion doesn't reach pure gaming Nirvana, but for another reason. The greatest fault I can attribute to Fusion isn't its restrictive form, but its overly predictable progression. I've never played any previous Metroids extensively and I could still sense where the game was taking me a mile away. Fusion doesn't put much effort into disguising its gameplay devices. The landscapes in the game leave little doubt to a player that they lack the abilities to access an area and must return later. Gaps are obviously way too far to leap, ledges too tall to grasp, impenetrable walls kindly indicate which weapons will destroy it. Once a player does obtain a new ability, an 'educational testing' area always follows so the player clearly understands the function of the newfound skill or weapon. The only thing missing was a Nintendo Power counselor holding my hand.

Yet this complaint does not overshadow Fusion's overall experience. Nintendo always prefers visceral over context heavy narratives and Fusion is another disciple of the tradition. As soon players enter into the research facility, the aural elements, stage design, and character dialogue work seamlessly to create a genuine sense of isolation and mystery. While the game mechanics are too literal, the emotional interaction is wonderfully subtle and a textbook example of Nintendo's school of effective audio-visual design. Until the gameplay design achieves the same heights as the sensory design, Fusion will remain a student and not the master. Rating: 8.0 out of 10.