The sublime power of Flower 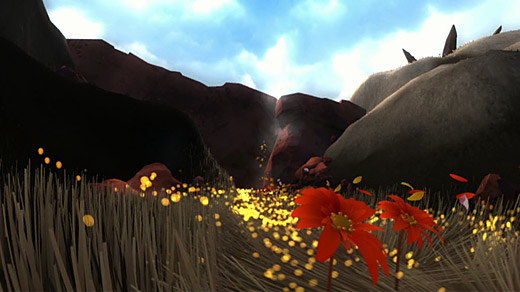 HIGH One of the most satisfying and appropriate closing credits in a video game.

LOW Getting stuck for about 20 minutes and having no idea what to do next.

WTF Long credits made me wonder "How many people does it take to make a game this short?"

Flower is essentially the anti-video game. Unlike many of today's popular releases that are long, loud, frenetic and cinematic, Flower is short, quiet, calm and abstract—and yet in spite of being the polar opposite of what I'd come to expect of sales-driven game developers and publishers, Flower feels vital and uniquely compelling to this game critic.

It is a time-honored tradition of our societies' artists to capture the sublime grandeur and beauty of Mother Nature. When considering the pre-historic cave paintings in France, the romantic landscapes by Casper David Friedrich and the impressionistic water lilies by Monet, Flower feels like a natural extension of this artistic lineage. The key difference is that canvas has been replaced by computers and hi-def televisions, paints have been replaced by pixels, and brushes replaced with algorithmic physics and 3D code. We as an audience are not invited to merely stand in front of its frame; we are asked to pick up a controller and become a catalyst to the artful experience.

Flower gives very little presupposition and explains next to nothing beyond its own title, so I feel that describing the gameplay in any detail is (in essence) spoiling the experience that the developer artists had hoped would be discovered through experimentation. However, I will say that the motion-sensitive controls are so appropriately elegant that the very act of pressing a button felt primitive and disruptive to the game's palette. I only wished the developer artists would have found a more fluid alternative to match its wispy nature.

So why does a game like Flower, that is so contrary to everything that I come to expect from video games, feel so vital? As gamers, I think we tend to forget that games bring us joy and enrich our lives by allowing us to experience amazing things that aren't possible in our everyday realities. Unfortunately, the harsh profit-driven market forces of the games industry is more interested in conditioning us to think more like fanboy addicts that must consume repetitive sequel after sequel for a particular type of game. Flower is a shock to the gamer's system because it reminds us that games aren't about fanboy allegiances, media hype, and quarterly earnings. Good games—like good art—can simply be food for the soul. Flower is the kind of soulful nourishment we need more of. Rating 9.5 out of 10.

Disclosures: This game was obtained via paid download and reviewed on the PlayStation 3. Approximately 3 hours of play was devoted to single-player modes (completed 1 time). There are no multiplayer modes.

Parents: There is no objectionable content in this beautiful, abstract game that focuses on nature. I suspect that teens and tweens may think that this game is too abstract to be enjoyable, but pre-schoolers will probably enjoy the vibrant colors, the beauty of the flowers and the ease of the free-roaming gameplay.

Deaf & Hard of Hearing: There are no mandatory audio cues that make the gameplay inaccessible and there is no dialogue that requires subtitles.

I agree this game is beautiful and relaxing. It’s also kid-friendly like Flow, but a bit more complicated because of the 3D aspect.

I also would love the soundtrack to this game and to Flow. It’s so pretty.

After getting angry with Street Fighter IV, jumping to Flower was a good choice to end my evening last night. It’s just very, very relaxing. The flight reminded me of the same feeling I had when I first played NiGHTS on the Saturn. Just the ability to free flow and explore. Granted, NiGHTS was on rails, but you still had some ability to fly around. Perhaps it’s just that wish to be able to fly freely.

I want the soundtrack to this game.

I like this review. It forgoes declamatory explanation and excavative analysis in favor of some light insight, much like its subject matter.