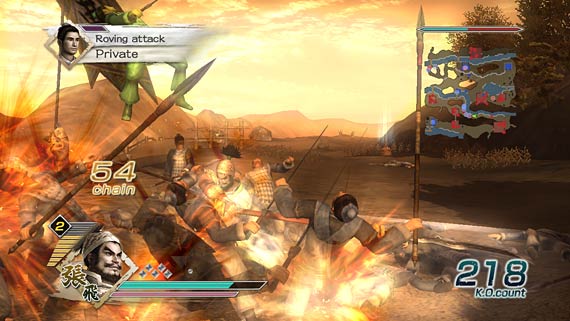 Parents, like all previous Dynasty Warriors games, this one is about war and killing literally thousands of enemies by a variety of blades. Strangely enough, there is no blood-letting or dismembering of body parts and the game gently refers to kills as K.O.s and bodies magically disappear from the battlefield once fallen. Based on the historical Romance of the Three Kingdoms novels, there is a strong presence of Chinese history and culture (however fictionalized and stylized), but parents must decide whether the cultural content outweighs the violence that comes along with it.

Fans of the Dynasty Warriors series will appreciate the upgraded next-gen visuals and the new branching upgrade system which allows players to a degree of customization over what kinds of special abilities and attacks the player would like to have in his or her arsenal. Perhaps the most intriguing feature for long-time Dynasty Warriors veterans is the multiple objectives per stage. Stat-hungry players looking for maximum experience points will obsess over these sometimes difficult challenges that also have the added bonus of unlocking new characters to control.

Gamers new to the Dynasty Warriors series will also find that part 6 is a good starting point to be indoctrinated into the series. Several key features and changes make this perhaps the most accessible Dynasty Warrior title to date.

Deaf and Hard of Hearing gamers shouldn't have any concerns. Story cut-scenes have sub-titles and in-game announcements also appear on-screen in text and can be tracked via a battle log if you pause the game. Nearly all gameplay cues liked charge combo meters and colorful auras around powerful characters are all visual with no auditory requirements.