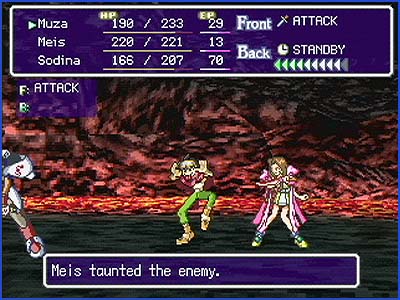 Conservative parents will clearly have issues with overt sexuality in the dialogue, some of the more scantily clad females in the game or even the whole notion of the dating simulator feature. But like I mentioned in my review, theres nothing overly vulgar in the content that you wouldnt otherwise see or hear in a PG-13 movie.

Anime fans will love Thousand Arms. Despite the poor voice-acting quality being of typical dub quality, the overall style and comedic sexually risqué storyline makes Thousand Arms one of the closest things to an interactive anime on the PlayStation.

Console RPG fans will surely be satisfied as well. Thousand Arms has its own take on the battle system and the whole dating simulator comes way out from leftfield for U.S. gamers. But this is still more or less a traditionally lengthy RPG filled with romance, melodrama and an epic storyline, encompassing 2 CDs.

The more casual gamer weaned on superhero comic books and Disney animation, may be unaccustomed to quirky anime style and may be often confused by some of the cultural nuances that permeates throughout the game. Keeping an open mind would certainly help in the enjoyment of Thousand Arms.