Americans have always been brazen when it comes to mocking other cultures and this is reflected in our media. If it's not the incomprehensible, BO-riddled Arab cabby or the hoarding, financially prosperous Jew, then its about the mathematically inclined, dog-eating Chinese. The Japanese have also taken their fair share of lumps with the media unfairly portraying their women as submissive geishas or their men as perverts who are forever suit-wearing business types. Amazingly, this overt racism toward the Japanese does not loom over the videogame industry. The popularity of console videogames, largely of Japanese origin, have managed to capture the hearts and minds of impressionable American youths and, at the same time, undone much of the media-fueled insensitivity and reeducated their notions of the Japanese culture. I can say this with authority because of the console role-playing game (RPG), Thousand Arms. Thousand Arms is a game that is so distinctively Japanese through every part of its fiber, that only a user base familiar and understanding of the cultural, Japanese nuances present in it will be able to comprehend and enjoy the game. Its localized release clearly signals that such a phenomenon has taken place in the United States.

Right from the start of Thousand Arms, it's not hard to notice the cultural nuances I'd referred to. The visual style of the game follows along the Japanese animation tradition known as anime. This in itself isn't surprising considering that the majority of console games still produced in Japan show some minor traces of anime style. The difference with Thousand Arms is that it doesn't simply have remnants of anime, its very look and feel is derived from the most hardcore and stylized form of anime designed to appease its more rampant fans in Japan (who are otherwise known as otaku, which loosely translates to geek fanboy). What that means is that most of the characters in Thousand Arms sport adoringly huge eyes (especially the girls), wildly colorful hairstyles, disproportionately lanky appendages, and overly exaggerated gestures. The environments and backgrounds in the game are still mostly real-time 3D models, but every effort has been made to represent the characters in 2D hand-drawn sprites that stay along the lines of the anime style. As for the audio presentation in Thousand Arms, the voice-acting bits are expectedly stilted, but the background music, mostly comprised of intricate, epic-sounding orchestra scores, is a winner. It's also worth mentioning that the J-pop song, complete with high-pitched female Japanese vocals, that plays during the opening introduction movie is another nod to the games anime roots.

The same hardcore anime style found in the overall presentation and made to appease the otaku crowd, is also ever present in Thousand Arms's storyline. The story focuses around the oh-so horny male protagonist Meis Triumph and his exploits at being a blacksmith who can forge magically charged weapons with the help of members of the opposite sex. The whole plot is meant to be whimsically comedic and wrought with naughty innuendo about sex, chauvinism, lesbianism, and even incest. You can also expect plenty of T&A in Thousand Arms as there is a typical overbalance of feisty underage female roles compared to male ones. To its credit though, while bordering on perversion and immaturity, Thousand Arms still manages to keep things relatively PG-13 clean. The controversial portions aren't disturbing, but rather comical as it isn't meant to be taken too seriously. The epic struggle part of the story, which takes on the usual fate of the world resting on the shoulders of one person (in this case, Meis) sounds all too familiar, but what saves the plotting from being overly derivative is the diversity of vibrant personalities that Meis interacts with and the numerous dynamic relationships he builds throughout his quest. 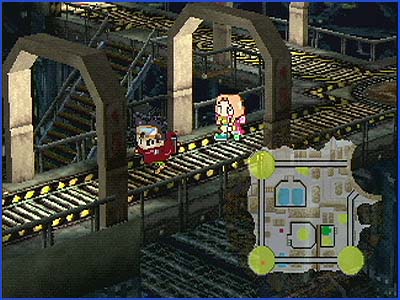 As far as gameplay goes, anyone who's ever played a typical console RPG will find him or herself on familiar turf. Players explore through a multitude of towns and dungeons in Thousand Arms from a three-quarter perspective while controlling a miniature 'super-deformed' representative of the actual party of adventurers. I had some issues with the constantly shifting camera angles (manual adjustment helped) and the stationery compass on the world map, but these were only minor annoyances. In particular areas of danger, the player is randomly thrust into turn-based battles, which take on a whole other control interface. While the random attacks are a typical RPG convention, the battle system is slightly different from the ones that fans of the genre have grown accustomed to. The most notable difference is that the active party members (limited to three) to do not simultaneously fight against the attacking group. Instead, battles take a one-on-one approach similar to Pokémon except that the two other accompanying party members in the background are able to assist the front member with items and spells or even serve as an outright substitution. There's also a great deal of emphasis on being able to hold, cancel, and change attacks at strategically advantageous times throughout a fight. The developers deserve credit for trying some different things and, for the most part, it works. However, I am not without my gripes. One problem is that the ability of being able to cancel and alter attacks didn't have much strategic use. I also found it strange that once the front character was manually substituted by another character, he or she wouldnt be able to return to the fray (what is this, the MLB?). Another problem is that battles tended to drag on due to the one-on-one format. Plus, the long battles get even more tedious in dungeons because of the high frequency of attack encounters, which occur just about every few steps.

As players progress through the story, characters acquire higher experience levels, more weapons, and more spells at their disposal. While gaining experience levels and gold pieces are achieved by more typical means of combat, special attacks, and spells are gained through the most unique, strangest, and most talked about part of the game, the dating simulator. You heard me right, the dating simulator. Meis is encouraged to court and romance the various digital girls in Thousand Arms. The reasoning behind this is because the happier the girls are, the more powerful the spells are that Meis can forge into the weapons (don't ask). Each girls happiness is measured by an 'Intimacy' level which can be raised by giving her gifts, playing their individual mini-game (what that is supposed to represent, I have no idea), or taking them out to various locations on the town that are designated as romantically ideal locations. Once on one of these dating hot-spots, Meis is subjected to repeated questioning from the girl to which he must respond with one of two multiple choice answers per question. Expect questions of the "Am I fat?" or "Do you think I'm pretty?" variety. Continual correct responses that tell the girl what she wants to hear will have her blushing with joy and ultimately raising her intimacy level. Pissing her off with cad or rude responses will not only cut the date short via the cold shoulder, her intimacy level will be lowered as well.

Again, this dating feature (which has an abundant genre all to its own in Japan) is uniquely tailored for the native otaku crowd, notorious for actually desiring cute anime girls rather than actual female people (don't ask)! Casting that disturbing image aside for a moment and focusing purely on the gameplay value, I was still impressed with the nearly 12 hours of spoken dialogue recorded for the elaborate dating conversations and the many facial as well as verbal reactions that the girls had. I was also surprised that pleasing these digital ladies wasn't as easy as it would appear. Each girl has a unique personality all their own and many of the conversation choices don't clearly border on good or bad responses. In other words, its up to the player to figure out a particular girls personality as well as her likes and dislikes and then adjust the responses and gifts accordingly. However, one thing about the feature did bother me (again, moral issues aside); certain spells and attacks can only be attained at specific Intimacy levels and can be missed if you inadvertently raise those levels too high without noticing them like I did. Now, in order for me to now retain those missing spells, I need to intentionally bring their intimacy levels down by behaving badly and raise them back up again for the newer spells. Unfortunately, this process of lowering levels is not as easy as it sounds and requires an extensive amount of time that can frustrate players as it did to me.

The dating simulator can still serve as a demented, satirical parody of expected gender roles for anyone whos ever courted a girl for an extended period of time. But I can't shake the feeling that other, less experienced anti-social gamers will get off on this aspect of the game in most unsavory and disturbing ways. However, as far as the gameplay is concerned, the simulated dating experience is rather different from anything I've ever played here in the United States. That, along with the interesting characters, whimsical story, and unique combat system definitely gives Thousand Arms a different spin on the whole RPG genre. I'm sure Atlus is banking on the many in the U.S. who are now familiar with anime and Japanese culture as I am. Those are the ones who will appreciate the effort put in by the developers on Thousand Arms the most. But I'm sure there are still those who are less familiar with anime or the related cultural nuances who may be left scratching their heads at all the apparent goofiness. Rating: 8.5 out of 10