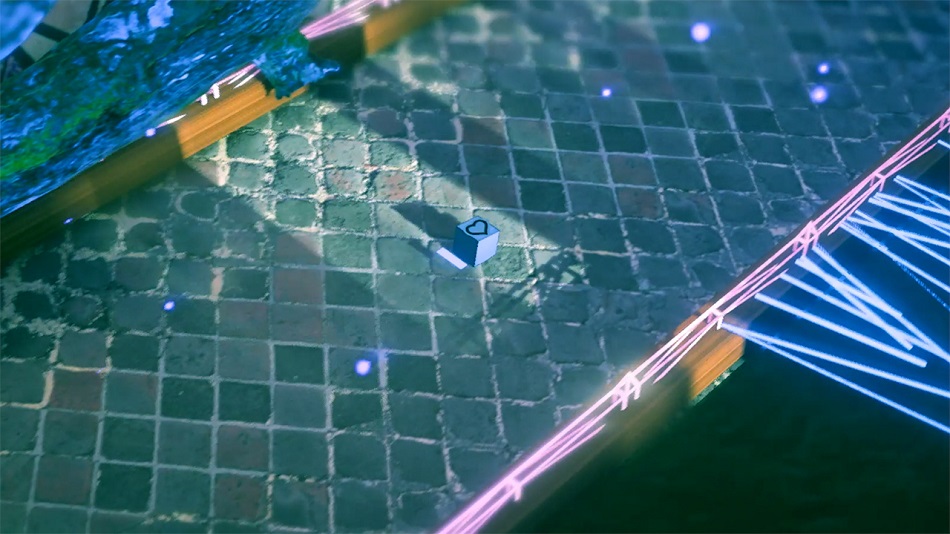 LOW The glitches in one of the final stages.

WTF I’m still not sure what a zarvot is.

Until I played Zarvot, I don’t think I’d ever played a game where I couldn’t figure out where the title came from. I beat the game, I’m pretty sure I heard the entire story, but even now I’m still unsure what a zarvot is. Fortunately, title or not, it’s still enjoyable to play.

In Zarvot, players take on the role of Charcoal, a blue cube, as it travels with its yellow friend Mustard. The pair are searching for birthday gifts for their friend Red – and yes, it’s a red cube. Red has been down in the dumps lately and Charcoal and Mustard hope to cheer it up with some radical birthday treats like a banana and some mochi ice cream. It’s a simple, slightly goofy story that’s strongest during the rising action. The climax is a slight letdown, as the big reveal was an obvious trope I saw coming a mile away. However, the game is light in story overall, so the lackluster ending doesn’t detract from the experience.

To find Red’s birthday gifts, Charcoal explores nine different isometric worlds, including a park, a subway station, even an industrial freezer. Each world is littered with various enemies along the path, with action intensifying in spots when a temporary barrier goes up and wave after wave of enemies attack. After each horde is defeated, players continue exploring the stage until they reach the boss. The end battles are highlights as Charcoal is forced to fight unique creatures like a demonic milk carton and a crayon box spider. 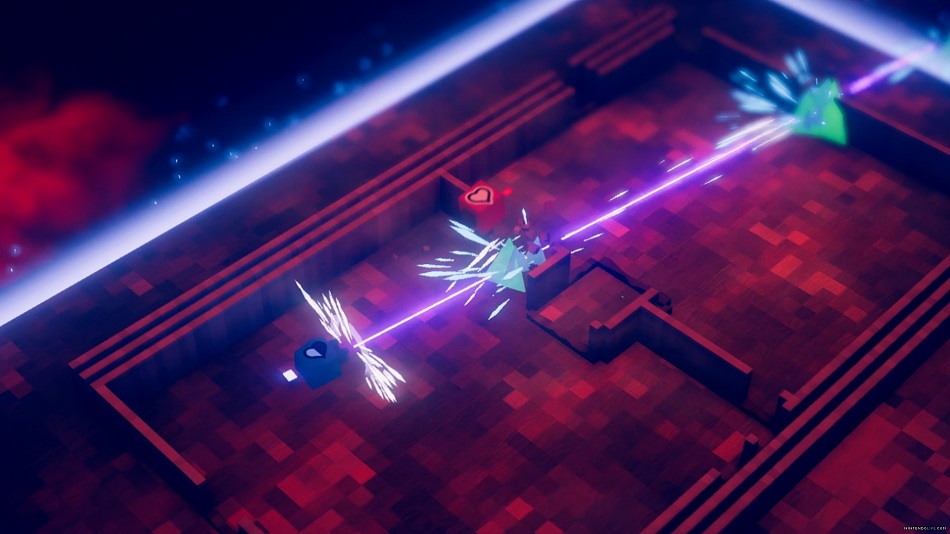 Most enemies, including bosses, can be defeated with a laser shot from Charcoal. Players can rapid-fire or hold down the button to deliver a more powerful charged shot. The laser is a reliable but not the most powerful attack, so Charcoal will also need to use a variety of skills to conquer tougher opposition. There’s a circular plasma blast and a spin attack that help defeat tougher enemies, or Charcoal can jump and dash away if things become too chaotic.

Zarvot controls well enough, but it’s a single-stick shooter. This means that players will have to be moving in the direction they’re firing. There’s a slight auto-assist that helps aim and while I was never frustrated during the action, aiming isn’t as precise as it could have been if Zarvot had been a twin-stick shooter.

For most of the campaign, things ran smoothly until I reached one of the final stages. I died during a wave of enemies and restarted that section. When I respawned, walls in the center of the arena were present visually, but shots from both Charcoal and the enemies sailed right though. These walls no longer provided a temporary barrier – it was now like fighting in a big open square, and clearly a glitch. 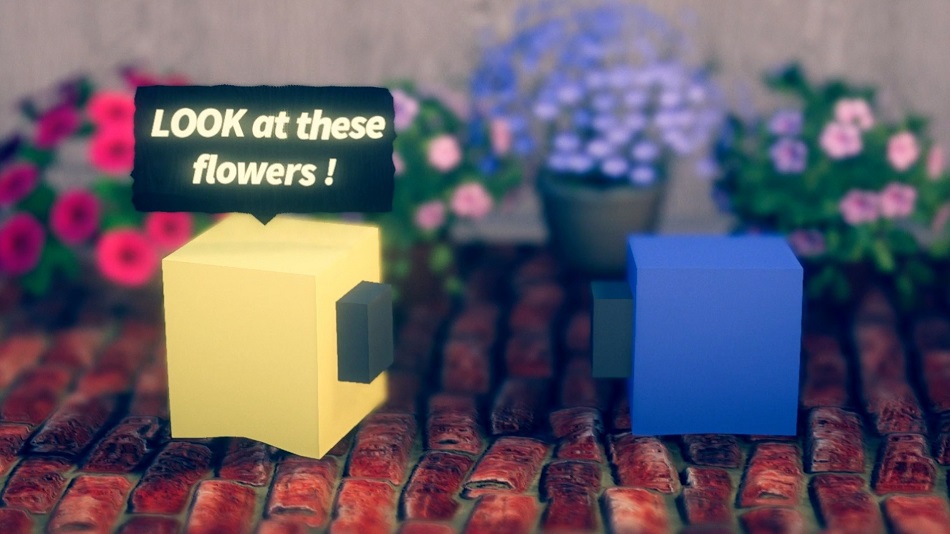 I continued until I reached the end of the stage and the final boss battle began. I attacked and quickly dropped the boss’s health bar by half. Then, to my surprise, I knocked the boss out of the stage. Hooray, I won! Or so I thought – Charcoal just sat there, and nothing happened. The boss’s health bar remained half full, and the boss never reappeared. I couldn’t progress any further, another glitch.

So, I restarted the battle (thankfully the auto-save was right before the fight) and tried again. I quickly took the boss’s health down and knocked it over the edge for the same results and a required restart. On my third attempt I used different attacks and was finally able to complete the stage, but these glitches were large, frustrating, and shouldn’t have been here.

Fortunately, there’s a other bright side away from the bugs of the campaign – the arcade mode. Players are dropped in large arenas filled with multiple elevations and destructible walls. Five waves of enemies are sent to each arena, with the final wave usually delivering dozens of foes at the same time. Ironically, this fast-paced arcade-style action is what Zarvot does best. I could easily play a hundred of these levels, but there are only ten and each one can be conquered in roughly five minutes.

While I’ll probably never know what a zarvot is, this project offers a solid arcade shooter and a decent campaign — it just needs a little more polish. Rating: 6 out of 10

Disclosures: This game is developed by and published by Snowhydra Games. It is currently available on Nintendo Switch. This copy of the game was obtained via publisher and reviewed on the Switch. Approximately 5 hours of play were devoted to the single-player mode, most of it in story mode, and the game was completed. Zero hours of play were spent in multiplayer modes.

Parents: According to the ESRB, this game is rated E for Everyone and contains Mild Fantasy Violence. Players shoot lasers and enemies explode. If parents are okay with this, there are no other issues to be worried about – no bloodshed or foul language here.

Deaf & Hard of Hearing Gamers: Dialogue is presented within speech bubbles that are clearly pointed towards the characters that are talking. Text size is not adjustable. The game does have audio cues when a new wave of enemies is about to attack, but these are accompanied by an on-screen visual cue. This game is fully accessible. 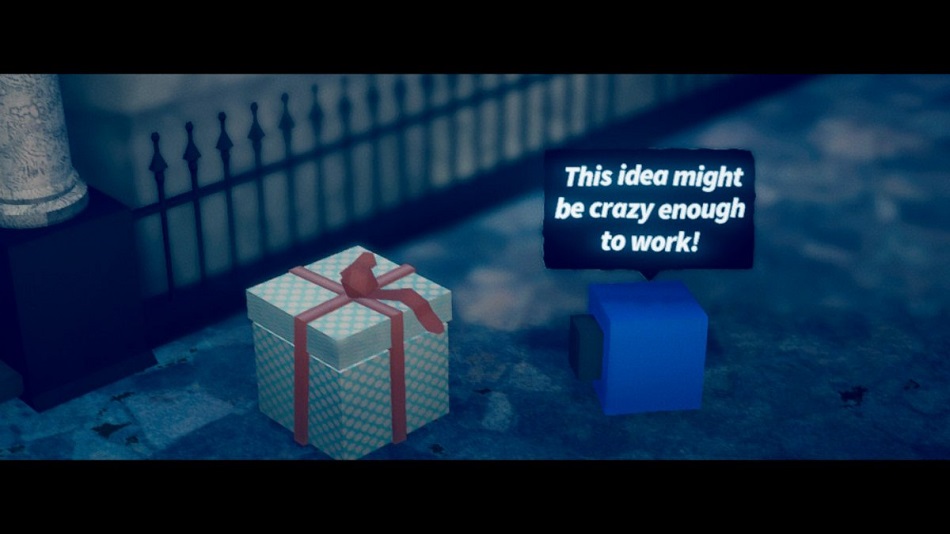 Remappable Controls: No, this game’s controls are not remappable and there is no control diagram, however there are multiple buttons that complete the same action. Players move with the left control stick or the left face buttons. Firing the laser is done with the Y or ZR button, while jumping is accomplished with the B or the R button. Players can dash with the A or L button. The pulse attack is completed with the X or ZL button – tapping either button twice will perform a spin attack.