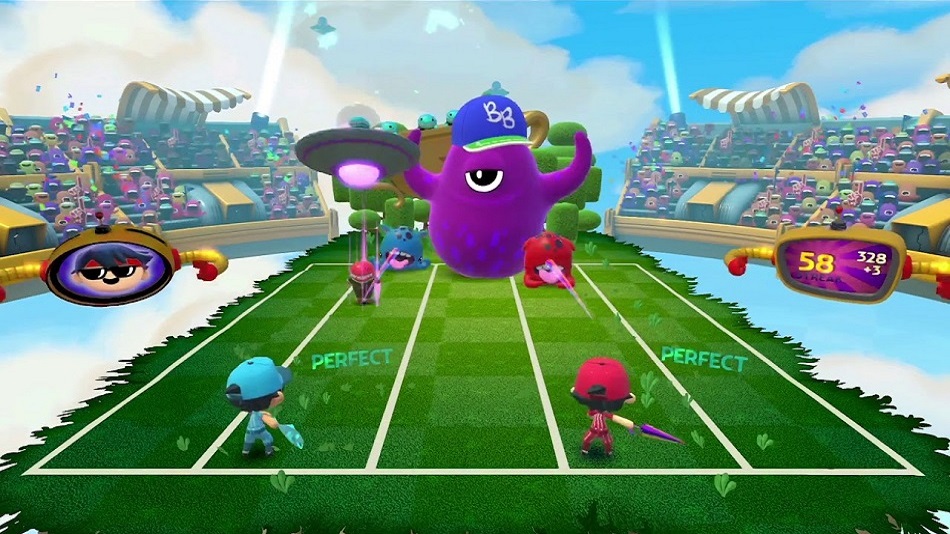 HIGH Using items like a garden gnome as a baseball bat!

WTF The monsters were originally into soap operas!? I want to play that game!

I’m not ashamed to admit it – I miss musical instrument controllers. From plastic guitars to bright red maracas, anything that lets me interact with a videogame in a different way is a good thing. The oversaturation of music games may have killed the future of these specialized controllers, but fortunately developers are still creating rhythm games. But are they worth playing with standard gamepads? Super Beat Sports makes an attempt, but never hits enough of the right notes.

Super Beat Sports follows a bunch of intergalactic monsters, conveniently named Muzicalians, who want to challenge earthlings to a variety of music-based sports. The monsters are as scary as the ones found on Sesame Street and the challenge is merely to win a highly modified event. At the end of each round, everyone demonstrates great sportsmanship and celebrates together.

This light-hearted, goofy premise is amplified by the music. Simple, upbeat rhythms combine with a mish-mash of silly sound effects that fit perfectly into the Super Beat Sports universe. While the latest pop or rock hit won’t be found within the game, the songs are well-composed. There were even a few times I caught myself humming the songs out in public! 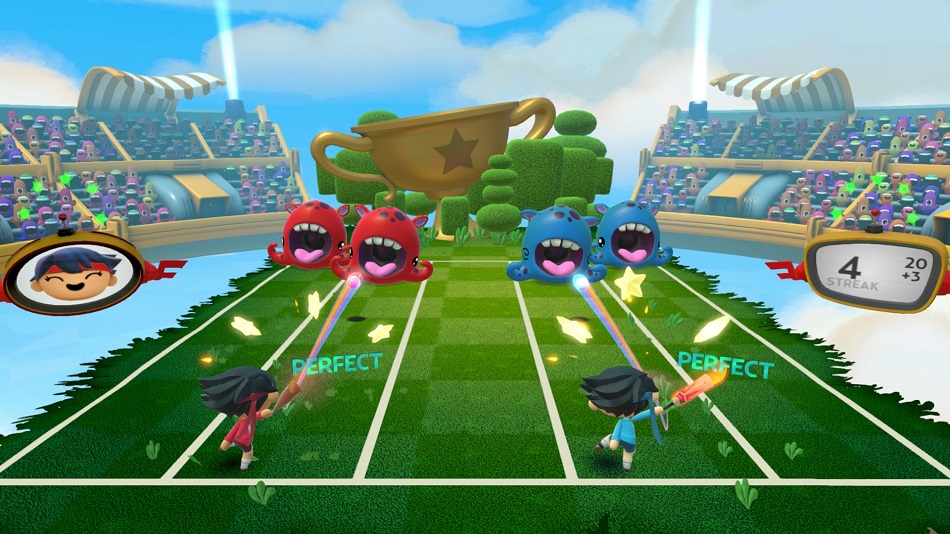 The modified sports represented here include such standards as baseball, volleyball, and golf. However, outside of the volleyball levels, few of the games closely resemble the sport they are based on. The basics are there, like swinging a club in golf or trying to hit homeruns in baseball, but players shouldn’t expect anything close to simulations.

Players also shouldn’t expect much complexity with the controls. Take volleyball for instance – all that is required to serve, set, or spike the ball by pressing a single button. I never had to move from place to place or never had to alternate my position on the court. All that was required was pressing one lone button to the beat. Even though I enjoyed the volleyball challenge, it became quite repetitive.

The other sports within Super Beat Sports aren’t much different. Baseball requires moving to one of three different hitting locations and golf requires aiming in a different direction, but that’s as varied as it gets – all the different games are just alternate versions of single button pressing. These events are entertaining in small bursts, but after about three or four rounds, I was ready to move on to another activity entirely.

Then one night, I noticed something on one of the loading screens. The Muzicalians were all jamming out on fake, plastic instruments! I couldn’t get that image out of my head. I kept thinking about all the possibilities that could have been incorporated with different musical controllers, like moving characters back-and-forth along a volleyball net fretboard or hitting to different locations on a drum kit baseball diamond kept swirling in my head. Then the game finished loading, and it was back to pressing one button while occasionally moving the joystick.Rating: 5 out of 10

Disclosures: This game is developed by Harmonix Music Systems, Inc. and published by Harmonix. It is currently available on Nintendo Switch. This copy of the game was obtained via publisher and reviewed on the Nintendo Switch. Approximately 5 hours of play were devoted to the single-player mode, and two of the game modes were completed. Less than one hour of play was spent in multiplayer modes.

Parents: According to the ESRB, this game is rated E. Characters are cute and cartoony, there are no lyrics to the music, and no violence within the game. This is a safe game for all family members.

Deaf & Hard of Hearing Gamers: Three levels were played and completed without sound. All music beats appear to have accompanying visual cues.