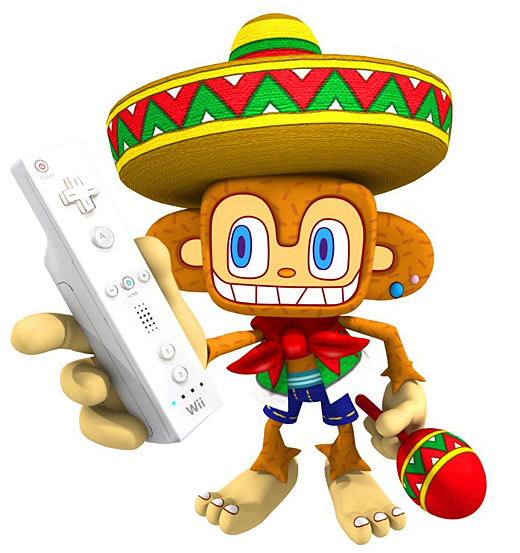 HIGH A sequel to an all-time great game.

LOW Achieving an A ranking through most of “Tequila” (Super Hard) only to plunge to an E within the last ten notes.

WTF The Hustle move requiring one controller above your head and the other between your legs!

Samba de Amigo has always held a special place in my gaming collection. Together with its sequel, the Japanese only, ver. 2000, it ranks as one of my top ten games of all time. The bright, zany graphics blending with the upbeat, quirky music have kept both Dreamcast games in constant rotation on my “Now Playing” list and I don’t even own a set of maraca controllers! So, I have been quite anxious about the Wii sequel and had high hopes it would be just as fun as the first two games.

Upon starting the game, there is much to be pleased with. All songs from the original are back. For those unlucky enough to miss the ver. 2000 import, most songs from the sequel have also been included. The songs new to the Wii version are a welcome addition, though only “Mexican Flyer” and the mid-nineties pop hit, “Groove Is In The Heart,” really stand out as something I want to play again and again. Unlocking the songs is done differently this time around, as now gamers must play a Career Mode to earn tunes and the pointless dance and maraca sound effects.

Playing career mode starts with an Easy mode where one is introduced to the basic Samba de Amigo gameplay of shaking the remote to the beat. For good measure, one also encounters the occasional pose-off: fittingly with Mr. Pose! In addition to the Classic game mode, gamers outside of Japan are introduced to Hustle mode, a feature originally found in ver. 2000. Hustle requires players to shake their maraca-Wii-mote back and forth between multiple positions with complete disregard for keeping the beat. Playing Hustle is finally a joy, as the same mode in ver. 2000 was awkward to play with the original maraca controllers. The cords would become tangled and many times the sensors would not recognize the constant back-and-forth movement. The Wii-mote does a considerably better job of picking up these zany dance moves and is bound to make the player look goofy. Sit back and watch a friend or two play Hustle mode and you are sure to laugh. 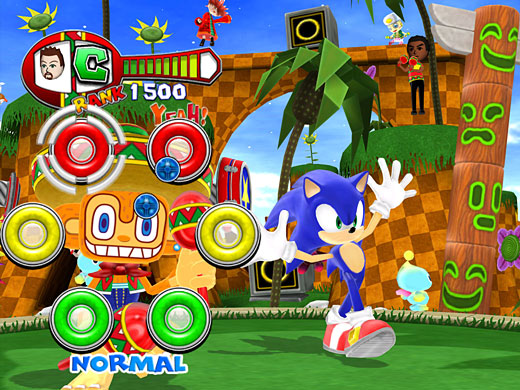 I breezed through Easy and Normal stages in career mode and was having a blast dancing like a fool in my living room. So then I tested my shaking skills on Hard mode. That is when the game became less fun and more frustrating. Trying to hit the blue notes in succession on Hard mode is not just a matter of keeping the rhythm, but also a matter of holding the controller just right. Many times I felt like I was holding the Wii-mote correctly only to have a succession of “Boos” tossed my way informing me that I most definitely was not. Frustration was not the only thing that set in—so did confusion. I could not figure out why I missed one note, but not the other, when I appeared to be shaking the controller the same way in the same spot. The worst part is I never seem to be able to get the top right corner when the beats start coming fast! A rhythm game needs to have tight controls on all difficulty levels, and Samba de Amigo does not succeed.

I want to love Samba de Amigo, I really do. The song selection is a great change of pace from the standard rock fare found in Guitar Hero and Rock Band, but in the end the controls just don’t cut the mustard. Trudge through Hard career once to pick up all the songs, but then stick to Normal. With friends in tow you will see what the game should be: fun. Too bad only half of the game is. Rating: 6.0 out of 10 maracas.

Disclosures: This game was purchased by the reviewer at a local retail store. Approximately 8 hours were spent playing with two Wii-motes as the primary controls. The reviewer only tested the Wii-mote and nunchuk control combination once, with similar results. The game was completed, as all unlockable content was achieved. No downloadable content was purchased, though a song pack is currently available.

Parents: According to the ESRB, this game contains mild lyrics. No songs come to mind that contain a curse word, though the lyrics may be slightly suggestive. Some parents might be concerned that there is a transvestite character in the game. If so, do not read the game manual and you will never know which animal it is, as no reference is made in the actual game.

Deaf & Hard of Hearing: Samba de Amigo relies heavily on music, however the blue, green, and red notes are easy to spot on screen. The poses and dance moves do not have sound cues and are presented visually for the player. Sound effects for the maracas and dance moves can be earned but do not necessarily enhance gameplay.

It sounds like Samba de Amigo required direct involvement of the original development team. I never understood why Sega tapped Gearbox to do a Dreamcast-to-Wii port.