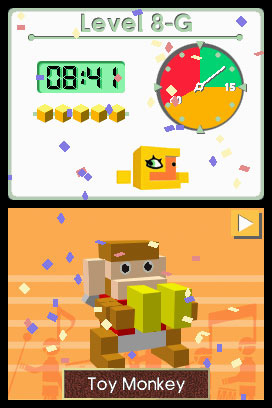 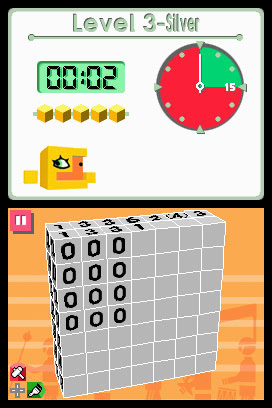 HIGH A fantastic sequel to a great puzzle game.

WTF That’s supposed to be a horse!? Really!?

It seems that everyone is jumping on the 3D bandwagon. Movies brought glasses wearing fun back to the mainstream, television soon jumped on board, and video games are planning their own foray into this exciting new 1950s obsession. Until the release of the Nintendo 3DS some time next year, we gamers will have to settle for boring old two-dimensional games. But wait, there’s a game to save us from this monotony of flat screen gaming: Picross 3D!*

Picross is a puzzle series from Nintendo that actually hasn’t been milked dry ever since its inception 15 years ago for the original Game Boy—probably because Picross isn’t a real system seller. However, Nintendo took a chance and released an updated version for the DS a few years back. Picross DS didn’t exactly shatter any records either, but Nintendo felt confident enough to release the sequel, and puzzle fans should be thankful.

The basic Picross concept is back: rows of squares with number clues are given for the player to decipher. This time around, gamers have another dimension to deal with and must now contend with cubes. This move to an extra axis could have been accomplished a millions ways of wrong, but HAL Laboratories pulls it out with stunning grace. The addition of new clues help you figure out which blocks need to be removed, but at the same time rack your brain with confusion at all the possibilities of spaces and cubes that need to be left in the puzzle. Picross 3D has a simple concept, but the game is far from easy. And that’s where the game really shines.

It’s rare to find something so simple, yet so engrossing. Picross 3D takes this simplicity, runs with it, and never looks back. Puzzle after puzzle is cranked out, and slowly but surely, the puzzles get more and more difficult. Row after row of cubes are added with larger and larger numbers to contend with. All the while, the concept never changes. It’s still the same basic formula, but it grabs a hold of you instead of boring you.

My only complaint about Picross 3D would be the new use of the control pad (or A, B, X, and Y buttons for you southpaws). The original Picross DS was a wholly touch-screen experience. Many might complain about a game that relies solely on the stylus for control, but a game like Picross is one that benefits from this type of control. In Picross 3D you now need to use the control pad to help instruct the game whether or not to knock out or paint different cubes. Often times I find myself trying to move fast, only to be pressing the wrong direction. This knocks out a box I do not want removed and then I must suffer the in-game penalty. I feel like the option could have been included to have this game be all touch-screen, especially since the icons for the control pad are already on screen.

It’s great to see Nintendo take a chance on Picross 3D. It may not be one of their more famous IPs, but is definitely one of their best and most consistent. Gamers looking for a challenging, yet simple puzzle game should look no further than Picross 3D. Just don’t be disappointed 3D glasses are not included. Rating: 9.0 out of 10.

*Yes, I realize Picross 3D is still on a boring old flat screen.

Disclosures: This game was obtained via retail and reviewed on the Nintendo DS. About 4 hours of play have been devoted to the single player mode, with more sure to follow. There is a create-and-share puzzle option that has not been tried, but has mondo potential.

Parents: According to the ESRB, this game contains: comic mischief. Parents have little to worry about beyond younger gamers possibly becoming frustrated.

Deaf & Hard of Hearing: The majority of time spent on this game was without the volume on. There are no audio clues to help solve puzzles, and all can be solved solely with visual clues.

I don’t think either one is really very difficult to pick up and play. However, I would say that the original Picross DS is a little more straight foward. The extra axis of Picross 3D involved adding a rule that, even 280 plus puzzles in, I some times don’t logic through correctly. It’s not a confusing rule, but I still would say the original Picross DS is more simple.

There’s no plot, and the puzzles are thematically similar but quite different. There’s more detail to the 2D ones in the original Picross – but there’s something special about the feel of sculpting in three dimensions in the new one.

Both are worth playing, in any order you like.

Nice review. As someone new to the franchise, should I start with the first iteration on the ds? Does it even matter?