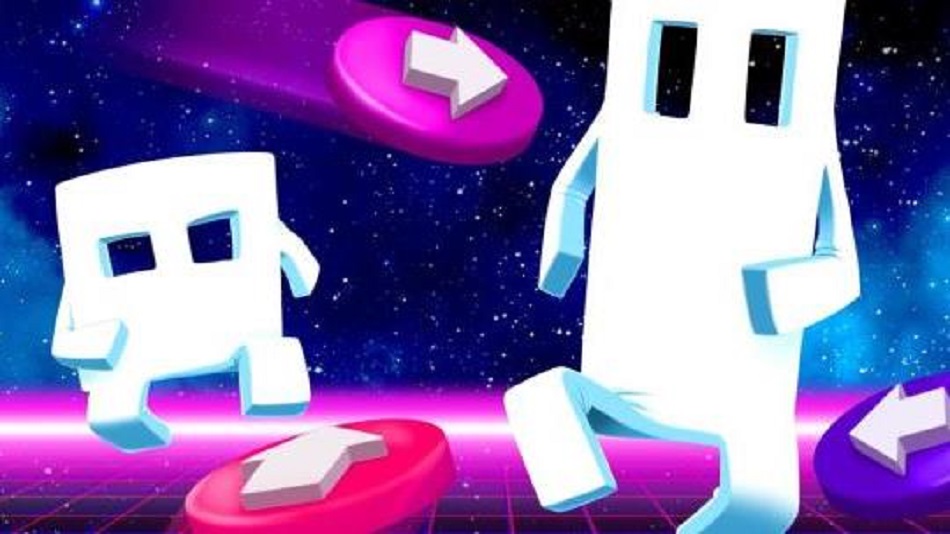 LOW At times, the glitch animation is a little too harsh on the eyes.

WTF The Game Over screen. Seriously, what the…

Retrogaming tributes have been popular so long that the best from this genre are themselves close to becoming classics. However, I hadn’t seen a retro tribute that focused on the music of classic games. Old School Musical (OSM) does just that – it’s a rhythm-based homage to the titles of yesteryear, and it rarely misses a beat!

OSM begins with the heroes, brothers Tib and Rob, being trained by their mother. Mom can be quite tough on her boys, but through her players quickly learn the basics of rhythm-based retro gaming. As a song plays, hit the corresponding face or trigger button as it approaches the on-screen icon — standard protocol in most rhythm titles. Sadly, there are no musical instrument controllers, but the experience is good enough without unique input devices.

Players soon discover that glitches have been causing havoc in Tib and Rob’s homeland, and across numerous worlds. Their mother has been readying them for just such a day and sends the boys out to stop the plague sweeping through their pixelated universe. Tib and Rob then enter a mysterious orb that sends them to faraway worlds, all of which are tributes to classics — things like Mega Man, Metal Gear, Outrun, Metal Slug, and even the NES version of Teenage Mutant Ninja Turtles are all lovingly celebrated. The levels resemble their source materials, both visually and musically, and it’s obvious the developers appreciate the IPs they used as inspiration. 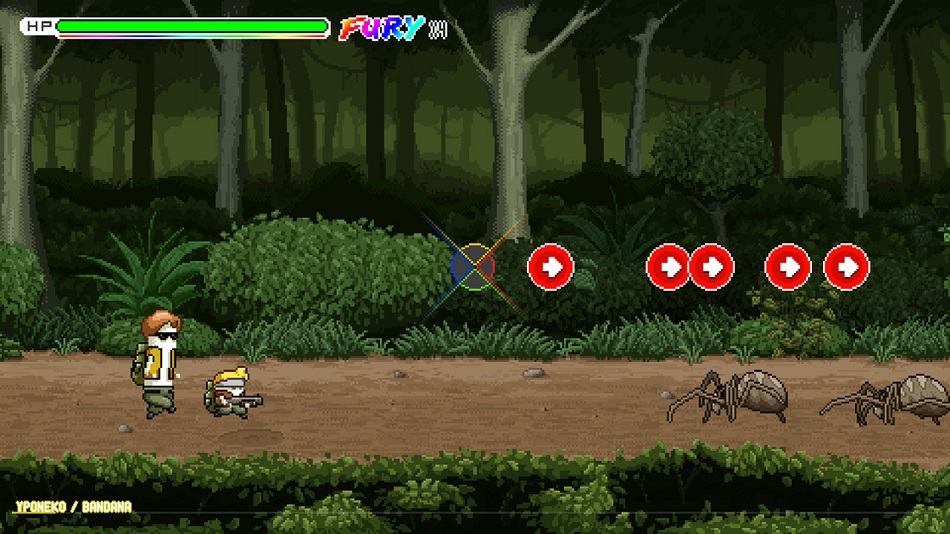 There are 50 chiptune songs within OSM and all of them sound like they could believably appear as remixes in the original games they reference. The Mega Man inspired tunes reminded me of the classic 8-bit robotic soundtracks, the TMNT songs took me back to the NES sewers, and the Outrun songs would be right at home cruising along the digital beaches of the original arcade cabinet. Even in the Metal Gear stages (where I wasn’t overly familiar with the source) the music felt era-appropriate. Imitation is the sincerest form of flattery, and the music in OSM is quite flattering.

As well-designed as OSM is, it does have a couple issues. One involves the main conflict – the glitches. They flash and mix up the pixels onscreen as a distraction. Early on, the glitches appear as small graphical errors, but as Tib and Rob progress, these malfunctions become larger and more noticeable. The idea is okay, but the glitching is similar to a strobe effect and can be quite painful to watch. After levels where the glitches happened in large quantities, I had to take a break to let my eyes readjust.

Another small issue occurred around mid-game. Here, the story requires the player to roam around a small town and interact with the inhabitants. Up until this point, I had progressed solely at the discretion of the songs. Then, this town section stops being linear and guided, and even throws in a jump button out of the blue. I’m still confused why this section was included, as it’s completely incongruous compared to the rest of the experience.

Fortunately, both these issues are easy to look past. Old School Musical is a wonderful audio tribute that keeps the beat of classic games going on and on and on. Rating: 8 out of 10

Disclosures: This game is developed by La Moutarde and published by Plug In Digital. is currently available on Steam and Nintendo Switch. This copy of the game was obtained via publisher and reviewed on the Switch. Approximately 5 hours of play were devoted to the single-player mode, and the game was completed. No time was spent in multiplayer modes.

Parents: According to the ESRB, this game is rated E10+ and contains Fantasy Violence and Mild Blood. The violence and blood are very similar to what would have been present in many 8- and 16-bit games, however there are times were blood splats are larger than just a few pixels. One other item parents should be aware of is that dialogue is occasionally sarcastic and snarky, often when talking about why the main characters killed an enemy.

Deaf & Hard of Hearing Gamers: All musical notes the player must hit are shown on screen. Other than music, no other sound cues are provided. Story and dialogue are delivered solely through text. When a character speaks, their name and a small picture identify who is speaking. Text size is not adjustable. The game is fully accessible. 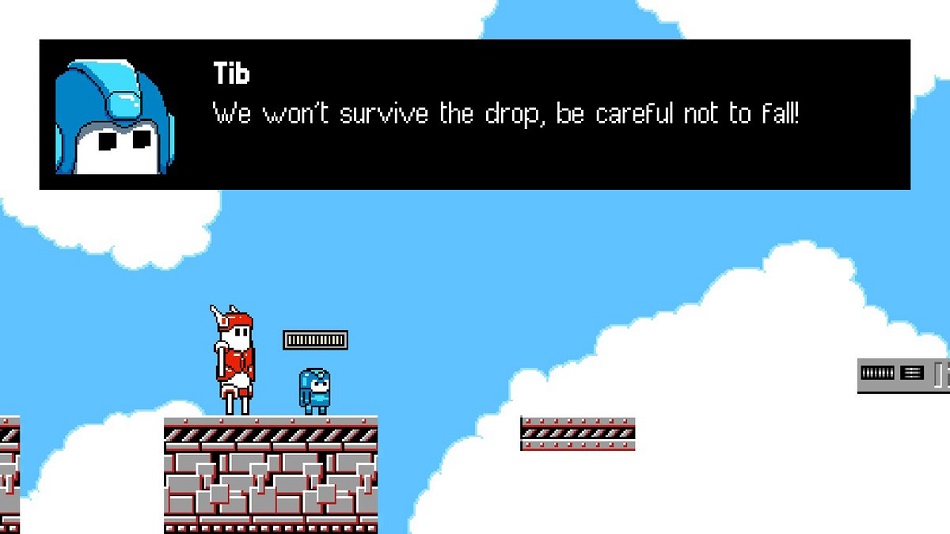 Remappable Controls: No, this game’s controls are not remappable. On screen cues tell players what buttons to hit, though a color quadrant with arrows is used instead of A, B, X, or Y. Each on screen note is represented in the same placement as it is on the controller. Players will also use the trigger buttons for some notes. These appear as gray bars on the screen. 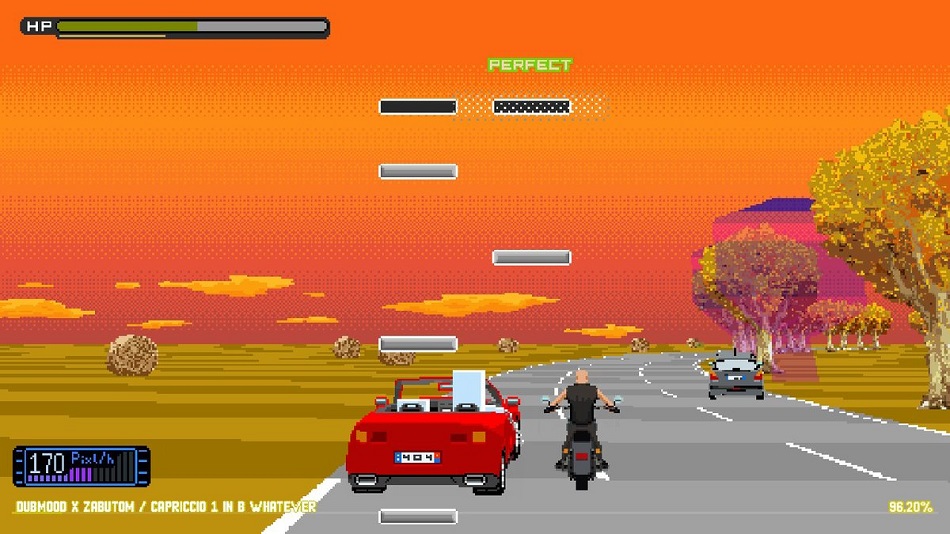 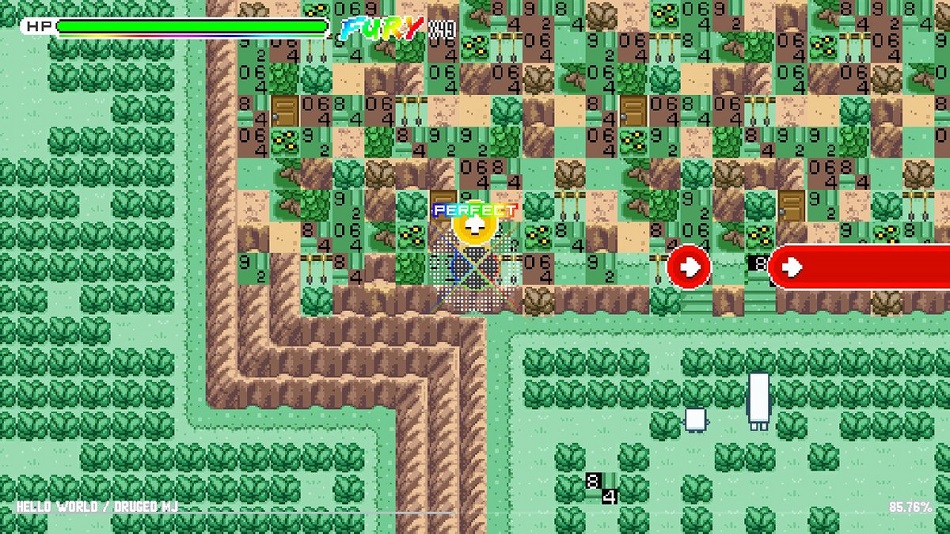